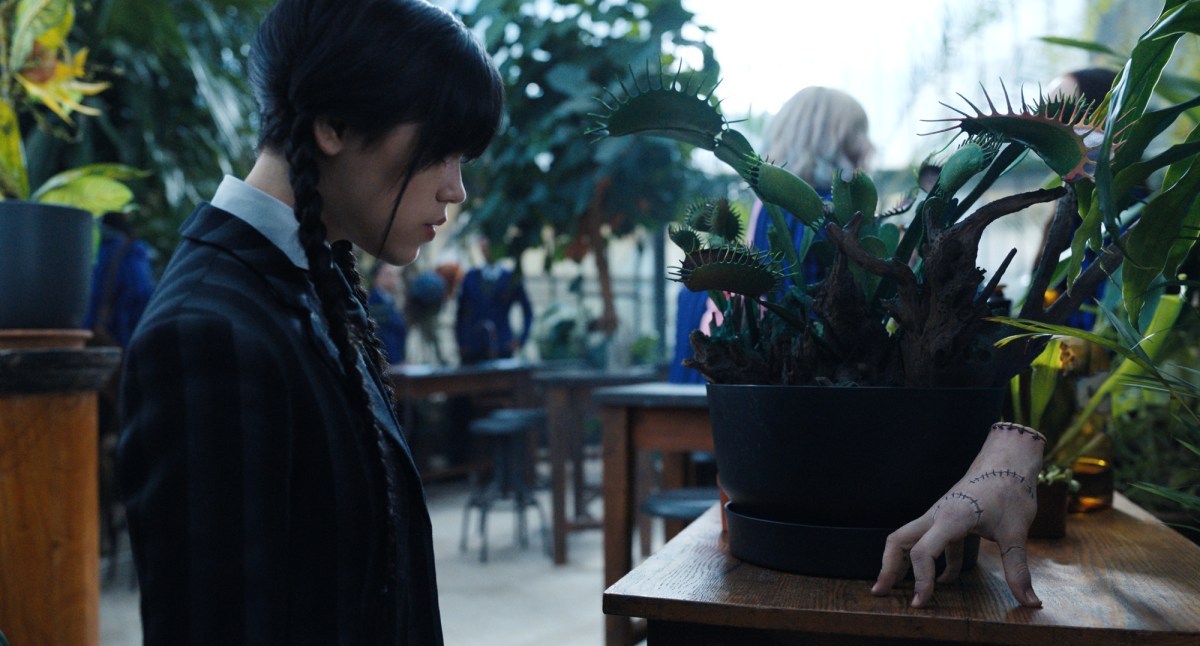 The eight-episode Netflix series, Wednesday, takes the audience into a captivating thriller filled with monsters, murder, mystery and the supernatural. As Wednesday Addams (Jenna Ortega) discovers the truth about the monster terrorizing Jericho and its connection to the killer, she also faces her fate in Nevermore. Until the Wednesday finale, the audience gets a happy ending. Or is it? A tantalizing cliffhanger teases a possible one Wednesday Season 2.

The threads of the investigations on Wednesday take an exciting turn in the finale. Wednesday initially believes that the Hyde, the monster that kills people, is Xavier (Percy Hynes White). But when she kisses Tyler (Hunter Doohan), her visions reveal the truth. Tyler is the Hyde, and when confronted and later released, admits he knew he was murdering people and enjoyed it. He also knows who his master is.

Wednesday needs answers before it’s too late. When Eugene (Moosa Mostafa) wakes from his coma, he reveals that the woman who set the Hyde’s lair on fire was wearing red boots. The small detail tears the case wide open. Wednesday confronts Marilyn Thornhill (Christina Ricci), who is wearing the red boots. If we go through the evidence, Thornhill is Laurel Gates and she never died at sea.

RELATED: ‘Wednesday’: Why Tim Burton Chose the Series as His First Small Screen Project: ‘She Shares My Worldviews on Things’

Once she found out about Nevermore and got a job there, she set her plan in motion. She used Tyler, told him the truth about his mother being an outcast, and activated his Hyde. But Thornhill escapes and kidnaps Wednesday and takes her to Crackstone’s crypt. She reveals that she will use Goody Addams’ Book of Shadows to revive her ancestor Joseph Crackstone and kill all the outcasts.

By the finale, the Nightshade Journal prophecy is fulfilled and Wednesday saves Nevermore from Blackstone. While the series ends on a good note, there is a glimmer of hope for one Wednesday Season 2.

After the dramatic events with Crackstone and Thornhill, the semester at Nevermore is over. Ms. Weems (Gwendoline Christie) was killed by Ms. Thornhill with Nightshade and the school has no headmistress. Wednesday finished her novel, made new friends, and possibly sparked something with Xavier. After all, he’s a free man now. He also gives Wednesday her first iPhone to keep in touch. As she leaves Nevermore, she receives a series of texts. An unknown number sends her photos of her, Tyler and Xavier with the message: “I’m watching you.”

RELATED: ‘Wednesday’: Why Christina Ricci is Returning: ‘Big part of my identity and story in my life’

There’s also a semi-cute GIF of Wednesday getting a knife to his head. Wednesday has her first stalker. But in the Wednesday In the finale, she begins to wonder if there’s more to it than that. Maybe Tyler and Ms. Thornhill were pawns in a bigger game. One scene shows Tyler in a straitjacket in an armored vehicle. Within seconds he begins to transform into the monstrous Hyde.

All the loose threads and the cliffhanger would be a perfect Segway rolled into one Wednesday Season 2. But what do the lyrics and details mean for a new season? Audiences should remember that similar stalker photos were found in Laurel Gates’ music box on Wednesday. It’s quite possible that Laurel wasn’t the mastermind and used Wednesday’s photos as a reference. Since Tyler also transforms into a Hyde inside the armored car, it means his master is still alive.

There’s no denying that fans are brimming with joy at a new but familiar version of the Wednesday Addams they grew up with. The Netflix series takes a fun and unique twist seen before. Filled with the supernatural, murder, gore and mystery, fans will be left wanting more. But will there be Wednesday Season 2? Neither Netflix nor the creators of the series have revealed any news about a new season.

But the cliffhanger finale is enough to keep fans hoping for one Wednesday Season 2. In Podcast TV’s Top 5, the showrunner of the series stated that there is a possibility of spin-offs based on the characters.

Al Gough explains, “When you create a world like this, the intent is that each of these characters could star in their own show. Certainly it is poured like that. If you have Fred Armisen, if you have Catherine Zeta-Jones, if you have Luis Guzman, that’s certainly something that we’ve discussed and would very much like to successfully branch into this world beyond Wednesday.”

The creator also reveals that Thing was Tim Burton’s favorite character. The thing has always been a mystery in the Addams Family universe. Its origin and identity are a mystery. Even Wednesday explained in Wednesday The thing is one of the family’s biggest dark secrets.

RELATED: ‘Wednesday’: Jenna Ortega Explains the Series and How ‘Wednesday Is Technically a Latina Character’