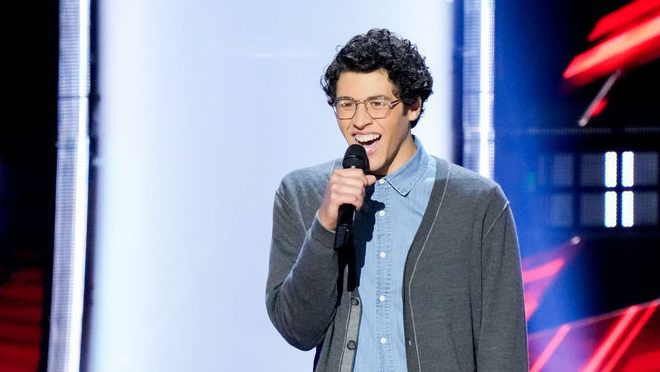 Fans who think “The Voice” has too much consistency might change their mind after watching 22-year-old Pennsylvania native Chello’s blind audition that aired Tuesday, September 20. “My real, legal name is Marcello.” He told cameras during his pre-audition interview, “but people call me Chello.”

It was evident that Chello had a quirky side during this interview, as he casually confessed, “Sometimes when I’m nervous, I take off my shoes and just hold on to them.”

Dressed in hipster attire, tousled hair and dark-rimmed glasses, Chello fit the role of an artist whose name is an instrument with an extra letter. In his filmed package, Chello said: “I started playing guitar when I was 15. My main focus is music production.”

Unlike many contestants, Chello didn’t have a sob story, just a dream. “It would change my whole world,” he said. “It would make me want to make a living and create and be an artist.”

Chello is currently working as a remote customer service representative helping people with computer problems. He admitted that “The Voice” is his first major audition.

The singer, who brought his two best friends to the audition, sang “Just the Two of Us” by Grover Washington Jr. and Bill Withers.

Though the coaches couldn’t see the whimsical moves he made as he sang, both Camila Cabello and John Legend turned their chairs for Chello based solely on his voice.

Shortly after they turned around, the fight to get Chello into their team began. Cabello joked, “First off, I had about a year in fourth grade where I played the cello, if that means anything to you.”

“Yes,” Cello replied, smiling. Cabello continued, “You’re a cool, cool cat. The fact that you could do it so cool initially with no riffs or runs was just your tone, and then you ended up doing this one crazy run and I was like, ‘He just held that back.'” The Newbie-Coach added added: “I could really imagine listening to your records in the car.”

Chello seemed genuinely flattered by the compliments. Cabello then commented on his dance moves, struggling to find the right word to describe them. Coach Gwen Stefani provided assistance by shouting the word “quirky,” which Cabello echoed and approved. This sent Chello into a half-moon dance that delighted the crowd and the trainers. Then he switched back to humble mode and said, “That’s all I have.”

When it was Legend’s turn to plead his case, he focused on the “joy” Chello brings to the stage. “Your voice is so different and interesting,” explained the EGOT winner. Legend also tried to build a connection based on their shared church background.

Ultimately, Chello was won over by Cabello when she claimed, “I’m ready to just get on my knees and beg.” Chello chose Cabello without realizing the cool rhyme bonus.

Backstage, Cabello told the cameras, “He’s such a sneaky assassin. He already has a strong artistic soul. I think he’s my secret weapon.”

Hundreds of fans have posted on YouTube how much they enjoyed Chello’s performance. In return, he wrote: “Thank you everyone!! You guys are so encouraging and it really means a lot to me :)”

Claiming to know the artist personally, one fan wrote: “I LOVE this guy. I know him! He sold me his car. True story. Seriously, he’s insanely talented and such a nice guy and has positive vibes that radiate out from him wherever he goes. Go get her, Chello!!!” Chello personally thanked the poster.

Another fan predicted: “This guy is going to make real history this season. I just feel it!” Another wrote, “I just like that he doesn’t try to be perfect and fit in, just shows off his vibe and vision of music.”

Fans can tune in to ABC on Mondays and Tuesdays to see how Chello fares on The Voice. While The Voice is no longer on Hulu and has moved to Peacock, the full fall live schedule can be viewed here.