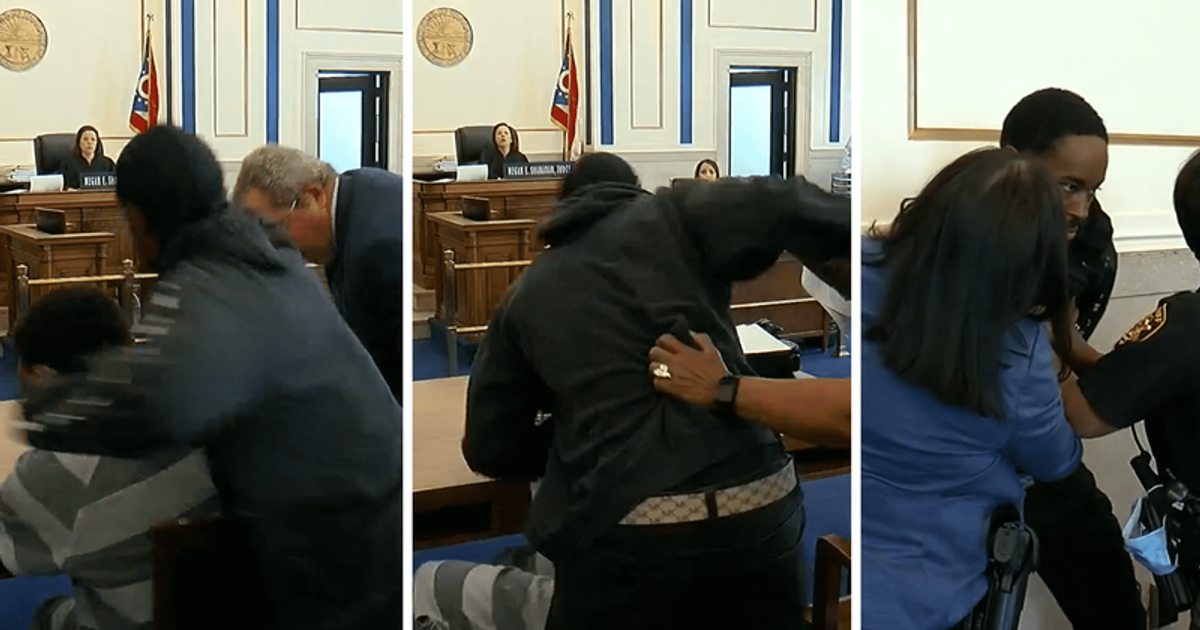 Hughes, who was sitting in the back row of the Hamilton County courtroom, snuck up behind Desean Brown and punched him in the jaw

HAMILTON COUNTY, OHIO: A terrified father was videotaped running toward the man accused of killing his son and repeatedly beating him in an Ohio courtroom. Desean Brown, 22, is reportedly facing murder charges after he allegedly stabbed 29-year-old Nyteisha Lattimore and dumped her three-year-old son Nylo Lattimore in the Ohio River in December 2020.

According to courtroom footage obtained by Fox 19, Antonio Hughes, Nylo’s father, who was sitting in the back row of the Hamilton County courtroom, snuck up on Brown from behind and punched him in the jaw. He continued to attack the alleged killer when two police officers rushed over to hold him and tried to throw him to the ground.

In another video from WCPO 9, Hughes continued to attempt to lunge at Brown even after he was handcuffed and surrounded by three deputies. Four officers dragged him to the ground before he calmed down. Hughes was charged with contempt of court and sentenced to 7 days at the Hamilton County Justice Center. “Judge Megan Shanahan and the Hamilton Sheriff’s Office wish to emphasize that this behavior will not be tolerated in the courthouse,” said PIO Kyla Woods.

Brown is charged with two counts of murder and one each of criminal assault, gross mistreatment of a corpse and tampering with evidence. Cincinnati Police Department detectives told the judge that Nyteisha was allegedly pregnant with Brown’s child but miscarried. They believe Brown killed her and Nylo in retaliation. “Mr. Brown had told Jamesica Cobb [Brown’s close friend] that he was very upset and that he would do something to her baby Nylo since she killed her baby,” Cincinnati Police Specialist Kimberly Kelley testified on June 17.

Brown reportedly planned to kill Nyteisha for months before stabbing her to death in a Walnut Hills apartment. While her body was discovered on December 12, Nylo’s body was never recovered. “Brown waited several days, left Lattimore’s body at the apartment, and then carried it out in a body bag he ordered from eBay,” investigators said. “Brown called an Uber to take him to the river and told the driver the large bag was just a few clothes,” the Cincinnati Inquirer reported.

“Everything in him, just the pain and everything has taken over. He did what I think any of us would do. I had to be on the phone late into the night ’cause he’s at his limit, you know? Faith Burton, a friend of the Hughes family, told Fox 19. “He’s about to, will he hurt himself? I couldn’t live without my kid either, you know? So I understand his feelings, I understand why he acted in court today,” she said. Brown is being held at the Justice Center without bail. If convicted, he faces the death penalty.