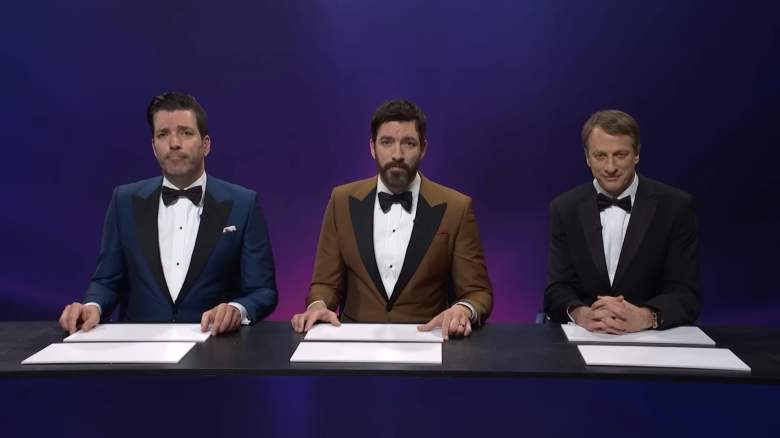 HGTV’s Property Brothers hosts Drew and Jonathan Scott have always been gifted performers who never miss an opportunity to put on a show. The twin renovators found their way back into the spotlight this week when they made a special guest appearance on the January 21, 2023 episode of Saturday Night Live (SNL) with host Aubrey Plaza and musical guest Sam Smith.

The twins appeared in a “Miss Universe” skit, in which the contestants gave increasingly absurd answers that were delivered in screeching voices. Introducing the Scott brothers along with another special guest, Keenan Thompson (who played the pageant’s host) said, “Let’s just go to our judges, who inexplicably are both the Property Brothers and Tony Hawk.” While many viewers were ready to see SNL cast members posing as celebrities, Drew and Jonathan Scott both showed up with the real Tony Hawk to finish the sketch.

Watch the “Property Brothers” make their SNL debut below.

The Miss Universe skit begins with six of SNL’s regular cast members dressed in festive robes and shouting the name of the country their character represents. Last to leave is host Aubrey Plaza, who yells “France!” The host asks more questions, like “Favorite food?” and Plaza’s character repeats her answer from earlier: “France!”

Plaza’s character in this sketch references a resurfaced video from the Miss Universe 2018 pageant that went viral on social media, where Eva Colas (representing the country) shouted “France!” The combination of Colas’ high energy and accent made her declaration sound like a scream, prompting many to re-share the clip.

In their part of the sketch, Drew and Jonathan Scott were asked to vote on the winner of the Miss Universe pageant. Both replied “France” in a calm tone, while fellow judge Tony Hawk called out his own name in the same tone as Plaza, “France!”

Keenan Thompson is momentarily amazed that the jurors are actually the Property Brothers and Tony Hawk and asks them why they took the jury job. Jonathan says he did it because he’s “bad with money,” and Drew says he’s there because “I’m his twin,” pointing to his brother. Tony Hawk doesn’t give a proper answer, but rather yells “France!” One last time, he guides Plaza’s character to win the pageant.

While the Miss Universe sketch marks the Property Brothers’ first SNL appearance, they’ve already been screamed at on the popular comedy show.

Earlier this season, host Amy Schumer appeared in a pre-taped skit called The Looker, which was meant to be a parody of Ryan Murphy’s Netflix series The Watcher. In the sketch, Schumer’s family reads a letter from a stalker who spies on their daily behavior. The stalker notes that she has observed Schumer’s character “enjoying himself with the ‘property brothers,'” which she is adamant about denying.

The Scott twins were also challenged at the season 43 premiere in 2017 in a skit called “The Fliplets,” which imagines what it would be like if there were three property brothers, with host Ryan Gosling appearing as the outcast brother, who keeps trying to address her parents’ divorce and being closed by his other brothers.