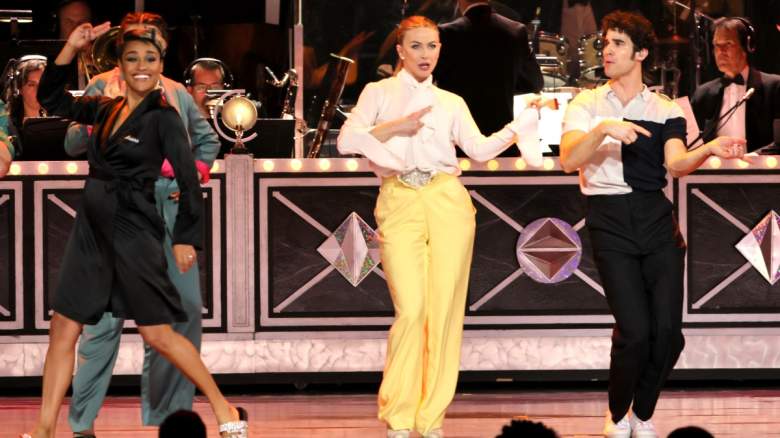 In the video Hough shared on Instagram, the professional dancer prepares for the Tony Awards that she will host. Two men put the shirt on her as if they’re quickly changing backstage, and her body is then completely covered in pixels instead of clothes.

“Are you ready?! Let’s do this!” Hough wrote as the video’s caption.

Hough’s friends and fans commented on the video.

“You wear those pixels well!” one person wrote.

Another commented: “Another wardrobe malfunction from Janet Jackson.”

“Certainly a worthy image left to our imaginations,” wrote another. “Be still my heart.”

One comment reads: “Now that’s what I call a wardrobe malfunction!”

The video shows Hough’s outfit being reassembled by the wardrobe as she sips from a coffee mug and winks at the camera.

“Okay that was hilarious!” one person commented. “Love it!”

Others noted that it was possible to see Hough’s dress in the mirror behind her, nothing she wasn’t actually nude in the shot.

Hough recently made her Broadway debut in the show POTUS, which was nominated for three Tony Awards.

According to TMZ, Hough has not been married as of June 10, 2022. Hough filed for divorce from former NHL player Brooks Laich in November 2020 after three years together.

In a pre-Tony Awards interview with Entertainment Tonight that Hough hosted on Sunday, June 13, 2022, Hough spoke about how her life has been since her divorce and what it was like living in New York City.

“Busy,” she told the outlet. “Eight shows a week on Broadway. I have an incredible group of women who have just really become my family, my sisters. I feel very safe and welcome here. And I love New York, it’s so amazing. I feel like a whole new energy of this next phase of my life, my career, and I want to create something and take it out into the world.”

She added, “This is where I’m supposed to be now, so I’m feeling good.”

The dancer said she loved being a part of Broadway and the community that comes with it.

“It’s absolutely incredible,” she told ET Online. “Being a part of this Broadway community has always been something I’ve always dreamed of and the fact that I can be here in the year that Broadway is back and the Tony Awards are back in Radio City and ‘ POTUS’ being nominated, I mean it’s just amazing. I am so grateful.”

In March 2020, Hough and Laich released a joint statement to People regarding their split.

“We have lovingly and carefully taken the time we needed to come to our decision to separate,” they told the outlet. “We share an abundance of love and respect for one another and will continue to lead from this place with our hearts. We ask for your compassion and respect for our privacy.”