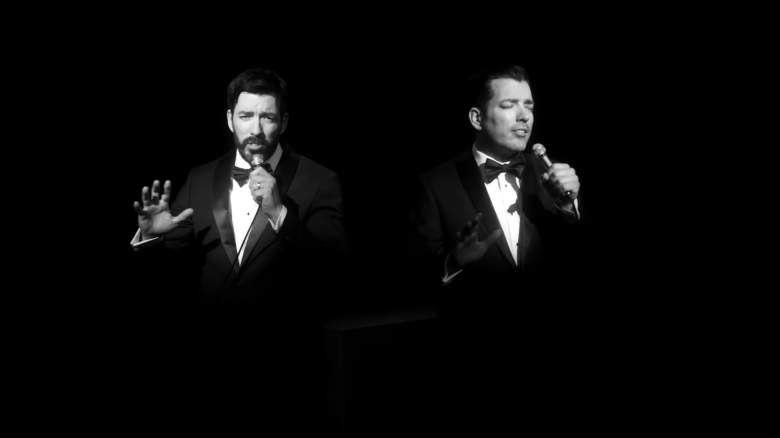 HGTV hosts and “Property Brothers” stars Drew and Jonathan Scott have never shied away from a chance to perform. After host Fallon appeared on “The Tonight Show Starring Jimmy Fallon” earlier this week to promote their latest season of “Brother vs. Brother,” host Fallon had Drew and Jonathan come back the next night to speak at his “Audience Suggestion Box” to help.

During the “Audience Suggestion Box,” Fallon answered various audience requests for bits or segments to add to the show, making the increasingly absurd-sounding suggestions a reality. First he played the “Yellowstone” theme song on kazoos, showed his “self-propelled chair” and conducted a short interview with virtual reality glasses on. He then recorded a suggestion that read, “I saw the Property Brothers were on the show last night, can you have the Property Brothers sing the Righteous Brothers?”

Fallon happily complied, sharing a black and white video of Drew and Jonathan singing “You’ve Lost That Lovin’ Feelin'” by the Righteous Brothers.

The Tonight Show shared a clip of Drew and Jonathan Scott’s performance on their Instagram page, and fans were shocked to see the brothers display their vocal prowess and flooded the post with positive comments.

“Is there anything you CANNOT do? You are awesome!!” wrote one fan.

“You are all very talented. Now come decorate my house!!” wrote another fan.

“It was so unexpectedly amazing!!! Jonathan and Drew are just so multi-talented and that’s what I’m here for!” A fan wrote on the song’s original YouTube clip.

“These guys!!! I was really surprised how beautifully they sang this song together. There is nothing not to love about these two ♥️ ❤️,” wrote another fan on YouTube.

While many were surprised to see the brothers sing together, this isn’t Drew and Jonathan’s first foray into music. Wide Open Country covered the Property Brothers’ country music “side project” in 2021. Alongside their own singles (under their stage name “The Scott Brothers”) “Hold On” and “Let the Night Shine In,” the pair released a country-ready cover of Flo Rida’s “My House.”

Prior to his 2018 marriage to Linda Phan, Drew Scott also wrote and performed a song for his bride entitled “You Chose Me.” The video for “You Chose Me” features Phan hearing the song for the first time on the morning of her wedding and being brought to tears, as well as footage from her actual wedding video, including her first look, Linda walking down the aisle, and her first Kiss as man and woman.

Not only can Drew Scott sing, as some fans are now learning with his Righteous Brothers cover starring Jonathan, but he’s also a skilled actor and dancer.

Drew and Jonathan Scott both had a penchant for performing from a young age, becoming clown apprentices and performing at birthday parties. Growing up, Drew wanted to act and even landed a small role on the hit series Smallville. Though most of his work since then has been reality and home improvement television, Drew never quite let his inner performer go away.

In 2017, Drew was announced as a cast member on Season 25 of Dancing With the Stars, where he worked with Emma Slater. The two made it to the finals and finished fourth in the competition. Jonathan made a cameo on Queen’s “Don’t Stop Me Now” during the couple’s fourth week.