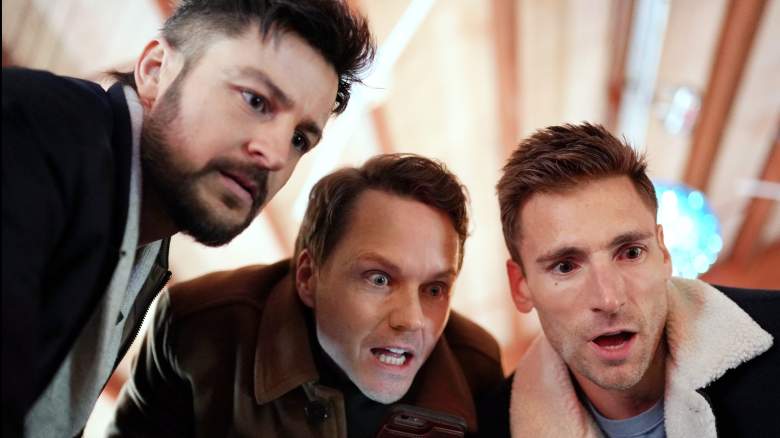 Hallmark’s Three Wise Men & a Baby just premiered on Saturday, November 19th. But after you’ve seen the film, it’s far from over. Tyler Hynes has teased that they filmed some scenes that didn’t make it into the film and may reappear at some point in the future.

According to a post shared by Tyler Hynes on Instagram, about 25 minutes of footage didn’t make it into the film starring Hynes, Paul Campbell and Andrew Walker.

He shared a post about the RomaDrama fan convention he will be attending, adding: “There were 25 extra minutes that are not in this film so hopefully we can bring in that experience with glitches and deleted scenes and Sharing stories of what it’s like to work with someone as gorgeous as @awalkk35 and as talented as @paulcampbellofficial.”

In an interview with ET Online, Hynes elaborated a bit more on some of the additional scenes.

He said one of the first scenes they shot was a dinner scene with Campbell and Margaret Colin.

“There’s a lot of b-roll, blooper-reel situations in this day and scene,” Hynes said. “…I think I barked at him [Campbell] at one point because he was an animal therapist. I tried to communicate with him in a language he could understand. So I started saying, ‘Wolf, wolf, bark.’ And somehow Margaret watched this take place and was right there and contributed to the wrestling match that took place between me and Paul. It’s just the best and it’s a dynamic that’s refreshing for us as actors.”

According to RomaDrama Live’s homepage, Hynes, Walker and Campbell will take part in an interactive encore screening of “Three Wise Men & a Baby” on Saturday, December 3 during RomaDrama Live. They will provide commentary throughout the film, and additional behind-the-scenes moments will be shared. Bloopers are also shared with fans.

The RomaDrama Live event will be held in Chicago and will also include a Mix and Mingle Christmas Gala on Friday December 2nd along with a brunch on December 3rd. The event will also feature a preview of “A Fabled Holiday,” starring Ryan Paevey and Brooke D’Orsay. They will do a Q&A panel after the film.

All-Access tickets are $699 per person and include entry to all Friday and Saturday events. Or you can attend Friday’s Christmas Gala (which includes the screening of “Fabled Holiday” and the “Mix and Mingle” event) for $399. Friday night’s event encourages fans to dress in elegant holiday attire.

Another $349 per person ticket option is admission to brunch on Saturday, December 3, along with the matinee screening of Three Wise Men & a Baby.