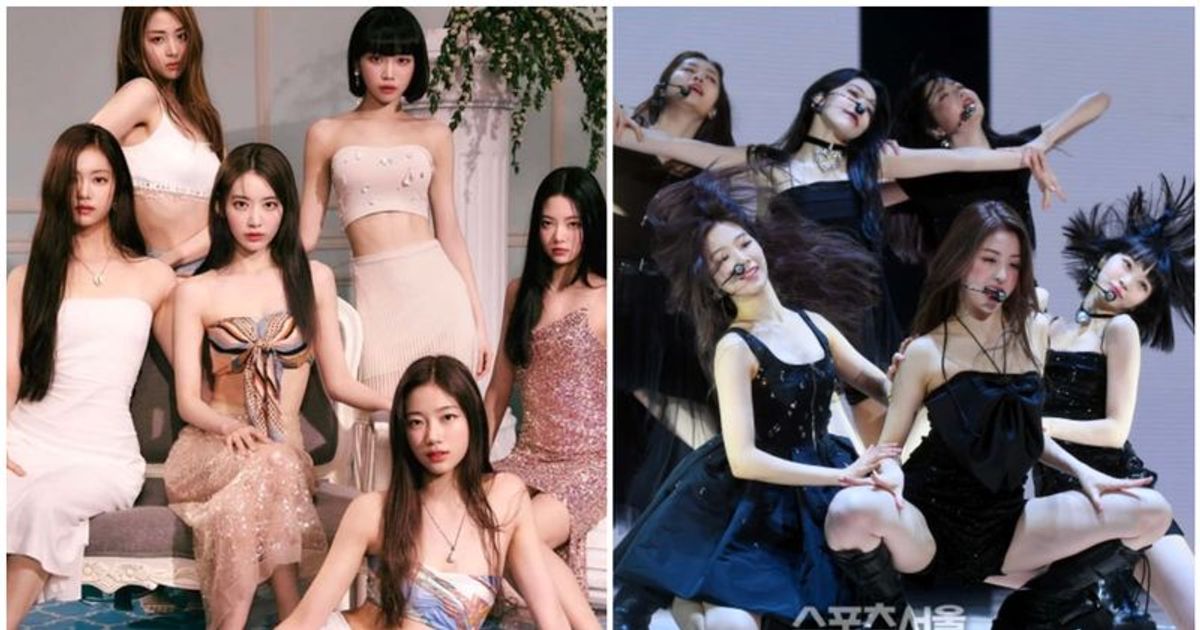 However, international fans like the group’s mature concepts and scoff at those who claim HYBE stylists are hypersexualizing the young members of Le Sserafim

While girl group HYBE has made a rockin’ debut with their debut mini-album, Fearless, Korean netizens have expressed concerns over the label for “hypersexualizing” Le Sserafim’s young members. There have been many reports suggesting that Korean fans and other fans from more conservative countries have spoken out about how HYBE stylists have dressed the girls in provocative clothing, showcasing concepts that overtly sexualize the young girls.

Right from the start, with the first teaser photos introducing the members of Le Sserafim, HYBE was under fire for showing the girls in sports outfits while posing with tennis rackets in a provocative way. Not only that, the girls were also spotted in see-through clothing for their debut stage. The group was also criticized for presenting unnecessarily provocative choreography according to K-pop girl group standards.

A new video has been released with more for Knetz (Korean netizens) blaming Le Sserafim’s stylists. But international fans are calling out trolls who are blowing things completely out of proportion. They find the mature concepts more realistic, and are pleased that HYBE is experimenting with refreshing themes rather than dwelling on tired “Girl Crush” and other such teen concepts that other Le Sserafim contemporaries have been exhausting in recent months. In one of their latest released teasers, members of Le Sserafim were spotted taking underwater photos for their debut mini-album.

Dressed as mermaids, the members wear sweetheart crop tops and a pencil skirt that matches the mermaid tail. While fans enjoyed the unique concept, Knetz noted that some members of the group, namely Sakura, wore see-through skirts that might be deemed “too revealing” for a young K-pop idol. Outfit-shaming and criticism of the “inappropriate” choreography in the music video for “Fearless” have infuriated some fans of the group. They claim that there is nothing wrong with the outfits.

Fans claim that Sakura in particular really stands out thanks to her outfit and it doesn’t seem that she or other members feel uncomfortable wearing the outfits. One fan asked: “What’s the problem here? It’s not like she’s not wearing anything. She might as well complain about not covering her chest enough. People need to stop being so overly conservative. She wore much more revealing gear when she was a minor, doing gravure photo shoots in Japan for a fan base made up mostly of older men. She is ADULT now. 24 years old. Not 14. If you have trouble with that, going to the beach and seeing women in bikinis must be like walking into a porn shoot for you.”

Another fan said: “TBH your outfit is the prettiest. The stylist dressed her up really well. it shows the pretty features of her body. The media just wants a tea lol. I can’t even see anything wrong with it, don’t sexualize it. Also, she’s not a minor anymore.” Another fan said, “It’s scary when kpop fans baby-suck these idols. She’s 24!” Another fan tweeted, “Um, I see women wearing similar dresses all the time. If she wasn’t wearing something underneath, then that would be a problem. By the way, she looks beautiful!”

Another fan said, “She’s grown up and it’s no different than a swimsuit whose concept is mermaids, so get over it.” Another fan said, “The stylist did a great job! Personally I think it looks regal and age appropriate as she is 24 years old! It didn’t look trashy or cheap at all. It looks the most elegant compared to the others.”

Another fan pointed out: “This is an overreaction. When I watched the video, sexual thoughts never crossed my mind. I watched the video and thought nothing of it. If that’s the first thing that comes to mind when you see this, then that’s you. But the vast majority don’t see it that way. And there are women who sexualize the type of bikinis they wear to show off their bodies. It doesn’t matter if there are children, they show it proudly.”