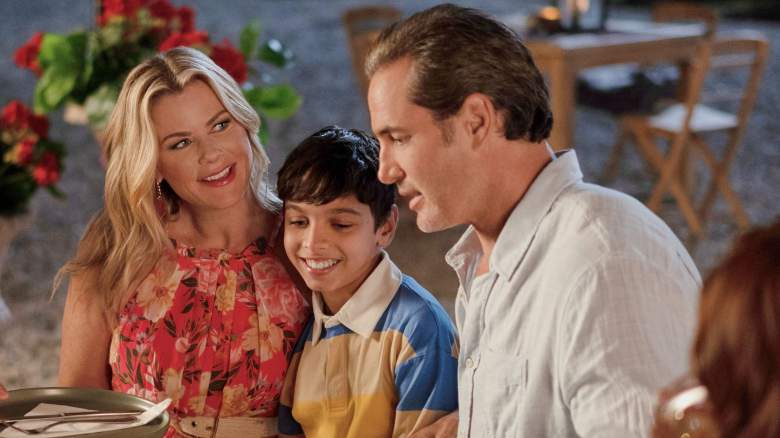 The sixth installment in The Wedding Veil series, entitled The Wedding Veil Journey, is airing soon. This time we’ll follow the sisters all the way to Greece as Tracy and Nick finally go on their honeymoon.

One of the main scenes of the film was at the Acropolis of Rhodes, Greece. And it was an important scene, not just because of the beauty of the place, but because filming there was a historic moment.

In the ITCAF podcast interview with Autumn Reeser, Reeser spoke about how lucky they were to be filming at the Acropolis.

“We’re the first production that was even allowed to shoot there,” she revealed.

She continued and talked about how the place was so beautiful that she got emotional and cried just for being there. She also said the crew was from Bulgaria and when they were filming at the Acropolis there was no access to cars so equipment had to be transported on golf carts and carried up several flights of stairs.

Webster posted this selfie while filming at the Acropolis.

Director Ronald Oliver shared in a post: “Sir Ronald is the first director in history to film on the Acropolis of Lindos. And he’s making a wedding movie,” Reeser revealed on a podcast.

Taking to Twitter, the cast clarified that they made history by filming at Rhodes’ Acropolis, not Athens’ Acropolis, which is a different location.

Sweeney wrote, “We were on the island of Rhodes. The Acropolis of Rhodes dates from a similar period but has a different structure. We were the first to film there…”

Here is a beautiful picture of the Acropolis in Rhodes taken in 1954.

According to the Archaeo – Histories Twitter account, “Most of the monuments on the Acropolis were built between 447 and 406 BC. erected”.

IMDb Pro mentions that the film was shot on the island of Rhodes and the town of Lindos in Greece. According to Rhodes Guide, tourists consider Rhodes to be the most notable archaeological site on the island.

“At first glance, everyone who approaches the village feels an urge to experience and absorb the spectacular natural scenery with the Acropolis standing on a gigantic rock, the white village houses and the crystal blue water,” Rhodes Guide shares.

In an interview with TV Insider, Sweeney said she loved filming in Bulgaria and Greece.

“[It was]such a fun adventure to … go to Bulgaria and go to Greece,” she said.

One of her favorite scenes was “the day we were shooting in Anthony Quinn Bay. It was this beautiful little cove and it’s supposed to be the view you see from the hotel they stay in when you watch the scenes over the bar. Autumn and Lacey and I couldn’t take it how spectacular that view was.”

She said during breaks in filming, they took off their heels and walked down to take photos on the beach.

Reeser shared what her morning routine was like filming the movie.

She wrote, “A day in the life when I became Emma filming The Wedding Veil series.”

She also commented, “Greece is the word 😉” on a post discussing the upcoming movie.

Young actor Ché Grant posted this next picture on Instagram while shooting the film. Grant wrote: “I had the time of my life on set while he was filming The Wedding Veil Journey.❤️”

“Thank you all for your loving guidance, your advice, your warmth, your laughter…” Grant wrote.

In this next picture, Grant marks Rhodes as the shooting location.

“Just finished filming for today! Can’t wait to talk more about this soon 💪,” he wrote.

In some of the saved films, Grant wrote: “We only sent Ché Grant to Greece and then to Bulgaria for a film shoot…” The commentary is followed by a host of behind-the-scenes footage showing the beautiful location.

Director Ron Oliver posted this next group picture on Instagram, writing: “And THIS is the conclusion of Sir Ronald’s latest epic in Greece. What an adventure, with some remarkably talented people in front of and behind the camera, beautiful locations and lots of laughs – and a few tears too.”

In another post, he wrote: “Sir Ronald can’t let the day go by without mentioning that the star of his latest epic – a certain Che Grant by name – turns 15 today and is celebrating by performing at the West End production of ‘Moulin Rouge’ attends ‘for the first time.’

“Sir Ronald found himself having brunch on a rooftop in the shadow of Athens’ Acropolis,” he wrote during filming.