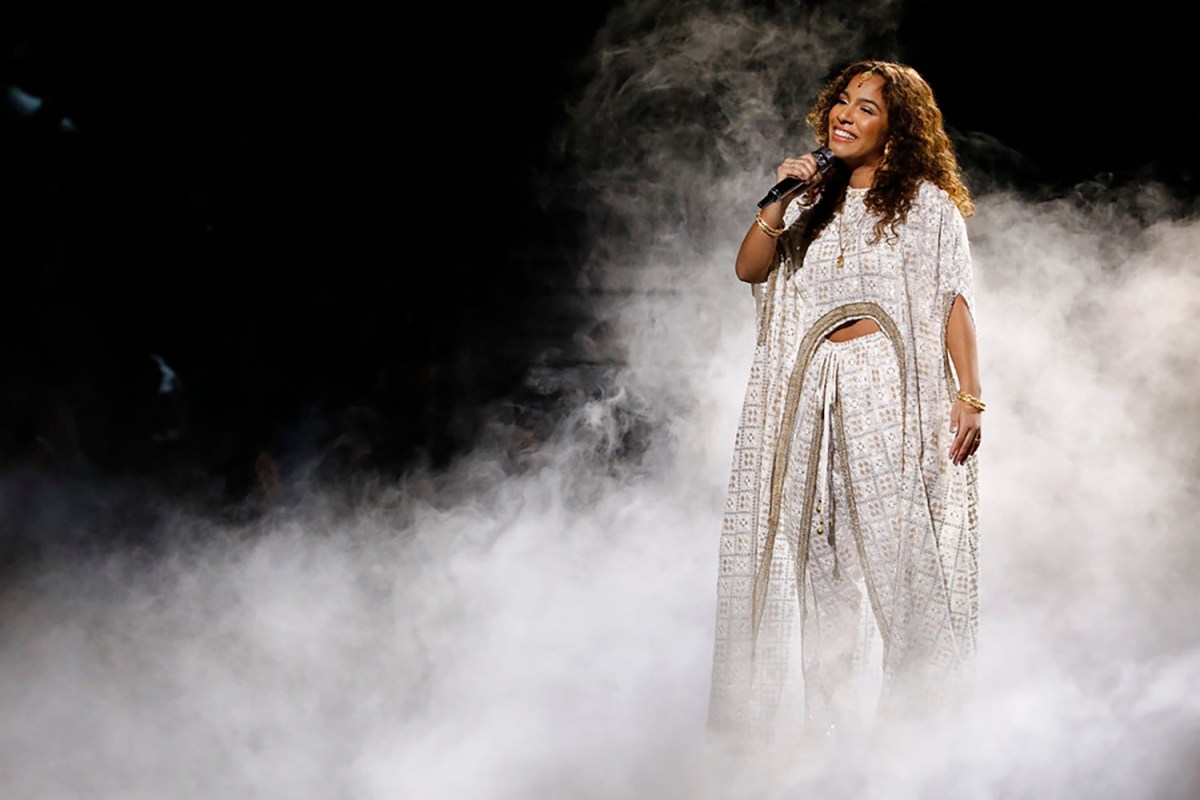 This week is all about the fans! The voice In Season 22, Episode 20, fans chose the top 10 artists’ musical performances and shared sweet video messages. Coaches Blake Shelton, Camila Cabello, Gwen Stefani and John Legend sat back and watched in awe as their teammates tackled all manner of hits. Tonight, fans can vote for the artists they want to see in the top 8. Here is a summary of the performances.

Parijita Bastola opened the show with Alessia Cara’s Scars to Your Beautiful. She slowed the melody down to a piano ballad, adding her signature vocal runs and showing her control. Blake looked forward to speaking with Parijita, calling her performance a “masterclass.” Meanwhile, Camila said she connects with the 17-year-old’s soulful sound. John praised the “flutter” in Parijitia’s voice and said she sounded mature for her age.

Kim Cruse performed next with Rihanna’s “Love on the Brain,” promising to bring back the Kim that fans in the blinds knew and loved. At the rehearsal, John said he loves their progression from soulful R&B to pop to country and back to R&B. All four coaches gave a standing ovation for Kim’s powerful performance. Blake said Kim could probably “kill someone and bring them back to life” with her voice. Gwen called Kim “underrated,” while John said the song was the “perfect match” for her tone.

Omar Jose Cardona closed out Team Legend with a challenging fan selection: Foreigner’s “I Wanna Know What Love Is.” John encouraged Omar to be “super dramatic” with his performance. Camila was sure Omar wouldn’t be going home this week and called his performance “euphoric”. Gwen said Omar sounded “amazing”, while John said Omar could lift people up with his voice.

Rowan Grace opened for Team Blake with Billie Eilish’s “I Love You.” The teenager thought it was the perfect choice because of the emotion and style of the melody. After her performance, Camila said she thought the song would be a challenge for Rowan at first, but the teenager pulled through. John added that it showed a “different side” to Rowan. Eventually, Blake thought Rowan had risen to the challenge.

Brayden Lape, the season’s youngest performer at 16, sang Kane Brown’s “Homesick.” The country tune went well with the teenager’s medium, soft voice. Camila said it was an “absolutely delightful” performance and her favorite performance of his to date. Gwen agreed, saying in the chorus, “Fit [him] like a glove.” Blake predicted that Brayden would grow “way too big” for that The voice Someday.

The voice Season 22 Episode 20 Sequel starring Bryce Leatherwood. Fans wanted Bryce to sing “Sand in My Boots.” The voice Alum Morgan Wallen, and Blake said Bryce could take it to the next level. After the performance, Camila told Bryce that she would never tire of his “buttery” voice. John added that he feels “at home” in this type of country song. Eventually, Blake realized how Bryce had “moved up” since the blinds.

Bodie wrapped up Team Blake’s performances with JVKE’s “Golden Hour”. He said the tune was in his wheelhouse and Blake couldn’t believe his high notes in the chorus. Bodie even nailed the rap part and seemed to be having a blast doing it. Camila said she was immediately blown away by Bodie’s energy and reiterated that he was unlike anyone else on the show. Blake beamed with pride as he pointed out how difficult the song was and how well Bodie pulled it off. The coach even said it was the best performance he’s ever seen.

After an intro by season 21 finalist Wendy Moten, it was Justin Aaron’s turn. Fans voted for Quincy Jones’ “Just Once” and Gwen encouraged Justin to let his facial expressions tell a story on stage. John said his mother was a big fan of Justin. Meanwhile, Camila called him a “masterful singer,” especially when he “soars into those high notes.” Gwen loved the song choices and said her parents are Justin’s “number one fans”.

Last week’s Instant Save winner, Kique, showed his gratitude to this week’s fans by performing their choice: “Call Out My Name” by The Weeknd. Gwen encouraged the artist to “show off [his] inner voice.” Kique couldn’t be live on the show, but he had a pre-taped performance ready. Gwen jumped up when Kique came over for a video call and revealed he had tested positive for COVID-19. John praised Kique’s ability to dem adding his personality to the song, while Gwen said he sounds “flawless”.

Camila’s last remaining artist, Morgan Myles, competed for her spot in the semifinals with Chris Stapleton’s “Tennessee Whiskey.” The trainer said Morgan could turn it into a “hodgepodge” performance by adding some gospel and pop elements. Morgan brought her guitar to the stage and leaned into the soulful side with ad-libs, claps and power notes. John said it sounded and looked like an “award show.” Meanwhile, Blake called Morgan’s voice “amazing” and Camila said Morgan “shines” on stage.

New episodes of The voice Airs Mondays and Tuesdays at 8 p.m. ET on NBC. Next day streaming is also available on Peacock.