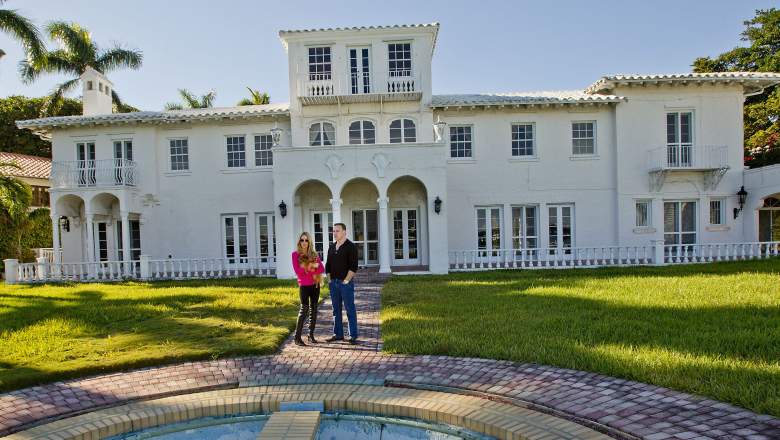 Leonard Hochstein says the couple’s prenuptial agreements require his wife to leave their $52million mansion if they establish separate households, but so far she’s refusing to leave. The cosmetic surgeon and medical spa owner says in court documents that he even offered to buy her another house or pay for the rent while the divorce is being settled.

According to court documents, Lenny Hochstein filed for divorce on May 20, 2022 in Miami-Dade County, Florida. He told Page Six at the time: “Lisa and I are going through a divorce. A few weeks ago I said no because I am trying my best to protect my family during this process. This is a very difficult time and I am asking for some privacy so that we can best take care of our children who mean the world to us.” He added that the couple have been “living separate lives” for months and as of April made the decision to get a divorce. They have two children, Logan, 6, and Elle, 2.

Lisa Hochstein responded in a statement to Page Six, saying: “With two young children, as a mother, I will be focusing all my energy and time on them. I am taken aback by his behavior and his reckless handling of the situation.” She added in a tweet on June 8th, “I know I was pretty calm. I’ll have a lot to say soon.” She also retweeted that of a follower June 8 Twitter response that said, “Girl, we’re all on your side. What REAL MAN kicks his children’s mother out of the ‘family home’? He should go, end of story.”

In a June court filing, Lenny Hochstein’s attorneys asked a judge to set an appointment for Lisa Hochstein to leave her mansion on Star Island, where the couple and their two children have lived. According to public records, they bought the home in 2012 through foreclosure proceedings for $7.6 million. Her plans to renovate the historic home caused controversy, according to The New York Times. According to Zillow, the home is now valued at $52.2 million.

The Hochsteins have been married since 2009. “In anticipation of their marriage, the parties entered into a valid and enforceable marriage contract in which both were represented by good and experienced attorneys,” Lenny Hochstein’s attorneys write in the court filings. “The parties have agreed, and it is stipulated in their marriage contract, that in the event of dissolution of the marriage the husband shall be entitled to retain as separate property the domicile at which the parties currently reside, which is in his sole name from any claims of the wife.”

His attorneys added that the prenuptial agreement requires Lisa Hochstein to leave the home within 30 days of the commencement of divorce proceedings. They wrote that Lisa “has indicated that she has no intention of vacating the house of marriage at this time.” Lenny’s attorneys have requested that a judge schedule a hearing to rule on the matter, but a hearing has not yet been scheduled. The marriage contract itself has not yet been publicly filed as part of the divorce proceedings.

The attorneys added in the court filing that the prenup allows Lisa Hochstein to keep some assets and receive “significant spousal support, including temporary support,” but does not require Lenny to provide her with a new home. However, his lawyers say he offered to do so. They write:

In Lenny Hochstein’s initial divorce filing, his attorneys wrote, “Reconcilable differences have arisen between the parties which have irretrievably fractured their marriage and there is currently no hope of a meaningful reconciliation.”

They added: “Both parties married with the full intention of starting a family and becoming parents together. They are happy to be parents of their two children. The husband’s goal is to ensure that the children enjoy the benefits that come from a congenial and cooperative co-parenting relationship, centered on the children’s best interests.” He has asked for shared parenting, including a parenting plan and a timeshare schedule. Lenny Hochstein has also offered to “completely meet all the children’s needs when they are with him and the wife.”

Lisa Hochstein took to Instagram to send what appeared to be a shadow to her husband on Father’s Day before finally deleting the post. Screenshots show Hochstein posted a photo with her two children with the caption, “Happy Father’s Day to all the amazing dads out there who put their families first.”

While court records suggest an ugly divorce is likely to be legal, the two sides have also spoken to each other in the court of public opinion. At the heart of the messy divorce is Lenny Hochstein’s new girlfriend, Austrian model Katharina Mazepa. Lenny Hochstein and his girlfriend, 26, have denied they were having an affair prior to his split from Lisa Hochstein and her split from her husband, according to Page Six. In an Instagram comment in June, Lenny Hochstein responded to a fan’s cheating allegations by writing, “I wasn’t cheating.”