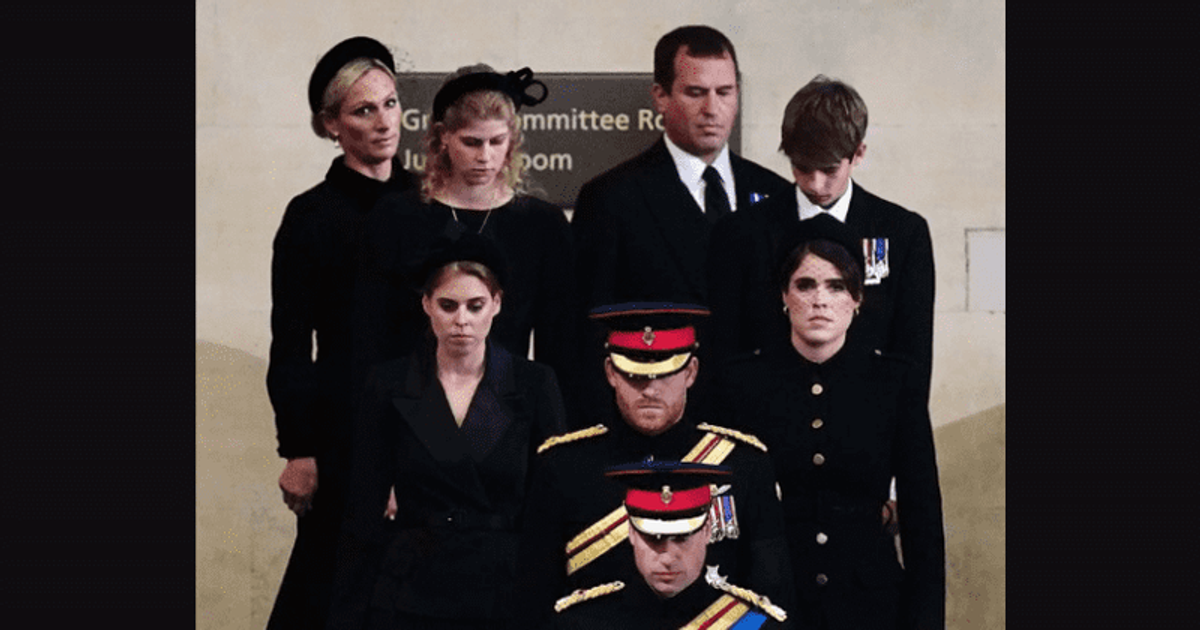 Remarkably, Princess Anne became the first woman to attend the Princess Vigil, traditionally observed by male members of the Royal Family, after standing alongside her brothers, King Charles, Prince Andrew and the Earl of Wessex.

In a memorable show of support, all eight of the late Queen’s grandchildren came together for the vigil in Westminster to honor her. The four granddaughters wore mourning dress with simple and elegant black dresses and headbands. They marched into the hall in formation, with Prince William leading the way in traditional military uniform. He was followed by Prince Harry, also dressed in regalia.

Behind the two brothers entered Princesses Beatrice and Eugenie, followed by Lady Louise and James, Viscount Severn and then Zara and Peter. They went in pairs and attended the 15-minute ceremony honoring their late grandmother. Following the Queen’s death, all of the grandchildren have come out to thank the public for their love and support.

All four granddaughters are affected by the loss of the Queen. During the Queen’s coffin procession from Buckingham to Westminster, Zara had sought comfort from her husband, who held her hand during their walk. Princess Eugenie broke down in tears during the same event. She later released a joint statement alongside her sister Beatrice, writing: “We haven’t been able to put much into words since you all left us. There were tears and laughter, silences and gossip, hugs and loneliness and a collective loss for you, our beloved Queen and our beloved Grandma.” Even young Lady Louise, who shared her grandmother’s fondness for carriage rides, appeared touched and wiped herself shed tears during the procession to lay the queen in state.

Princess Anne, the mother of Zara and Peter, previously stood with her brothers during the Princess’ Vigil – a ceremony that has taken place twice before, once after the death of King George VI and then after the death of the Queen Mother. However, no female member of the royal family had ever taken part in this tradition.