The Masked Singer season 8: Is Nicki Minaj under the Robogirl mask? Here are the clues 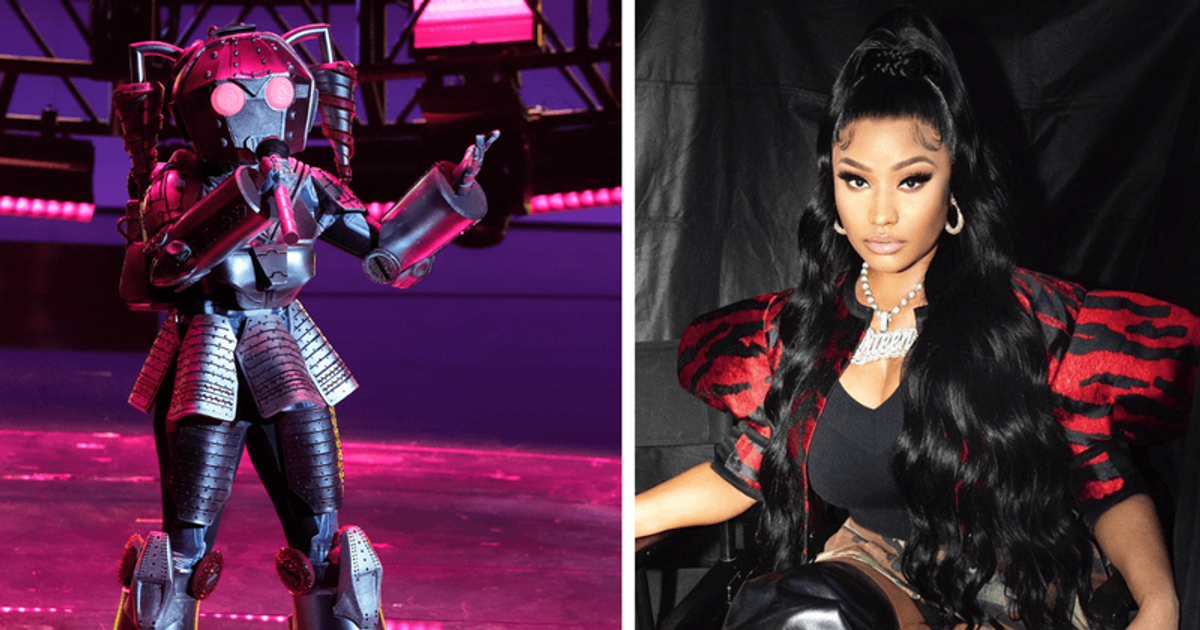 With the upcoming Episode 4 titled Andrew Lloyd Webber Night, fans are wondering who hides beneath the much-discussed Robogirl mask, and their best guess is Nicki Minaj

The excitement surrounding The Masked Singer season 8 is building week after week! And with new episodes released each week, we’ll see new masked singers, unmasks, and melodic performances. As the release of Episode 4 of The Masked Singer Season 8 draws near, fans are wondering what uniqueness the new episode will bring.

With the upcoming Episode 4 entitled Andrew Lloyd Webber Night, fans are wondering who is hiding under the much-touted Robogirl mask. As the name suggests, this masked singer costume is a robot. The dress shines in all silver colors. In addition, the mask clearly indicates that it is a girl, as there are two metallic ponytails with red ribbons on it. In addition, the dress consists of a metallic skirt. The woman in this mask has a girlish pose, with her hands spread and one leg folded and held up. Also, the masked singer’s costume has bright light blue eyes. Read on to discover more clues about Robogirl.

Robogirl’s first clue that pulled off the girly look was a “wrench”. Well, another clue is this masked singer’s costume. This robot costume itself suggests that the celebrity in this mask could have worked either as a robot character in a film, show, play, or music video. Aside from that, FOX has revealed this masked singer’s signature dance move. Additionally, ‘The Masked Singer’ recently dropped various references to the upcoming masked singers in the upcoming episode. These clues are – a Broadway sign, the movie projector, the surfboard and honey. Well, it seems the Broadway sign could be associated with Robogirl’s mask.

Nicki Minaj is a rapper, singer and songwriter from Trinidad. The star is famous for her animated flow in her rap style, sharp lyrics and offbeat accent. Before becoming a rapper, Minaj wanted to be an actress.

According to Fandom’s report, Minaj was cast in the 2001 Off-Broadway play In Case You Forgot. In fact, the Broadway sign given by FOX could be related to Minaj being under the Robogirl mask. Minaj was also seen in a robotic look in one of David Guetta’s music videos titled “Turn Me On.” This could be another link suggesting that Minaj is under the robogirl’s mask. However, the candidate’s identity is set to be revealed in The Masked Singer Season 8 Episode 4.

‘The Masked Singer’ fans took note of hints published by FOX on Instagram. One wrote, “I’ll only guess Nicki Minaj since Lil Wayne was the guy robot in a previous season.” Another tied Robogirl’s clue to Minaj, “Nicki Minaj: Gang Gang got the hammer and wrench.”

Another fan hoped, “I hope so @nickiminaj.” Another surmised, “I’ll guess Nicki Minaj since Lil Wayne was the robot guy in a previous season.”

Will Robogirl Win Season 8 Episode 4 of The Masked Singer?

It is not yet clear who will win the next episode. But there’s speculation all over the internet that suggests Robogirl could be the next queen of the show. After the channel posted Robogirl’s hint on YouTube, fans started flooding the comments section claiming that Robogirl was the next winner.

One fan wrote, “Robo-Girl will probably make it because one of her backgrounds from trailers and ads is one where she’s pretending to jump near a piano.”

Fans noticed Robogirl playing the piano in the recently released episode titled “Muppet Night,” which was previewed by FOX. One fan comments: “I’ve never heard people say that in the comments but it’s obvious Robo-Girl is moving on because Fox revealed that Episode 5 is Muppet’s Night and one of the previews showed how Robo-Girl with Kermit performed the piano. Yes, this is further proof that Fox is terrible at keeping secrets.”

Another fan claimed: “Robogirl goes on. She has a different background with a bath”. Additionally, one fan slammed FOX, saying: “Robo-Girl is definitely moving on to the next round. Fuchs is not good at secrets.”

However, as of now, nothing is clear about who will win the upcoming episode. Season 8 of The Masked Singer, Episode 4, due out on FOX October 12, 2022 at 8 p.m. ET, will announce the winner.

4 Easter Eggs in “Wednesday” About The Addams Family Universe

4 Easter Eggs in “Wednesday” About The Addams Family Universe