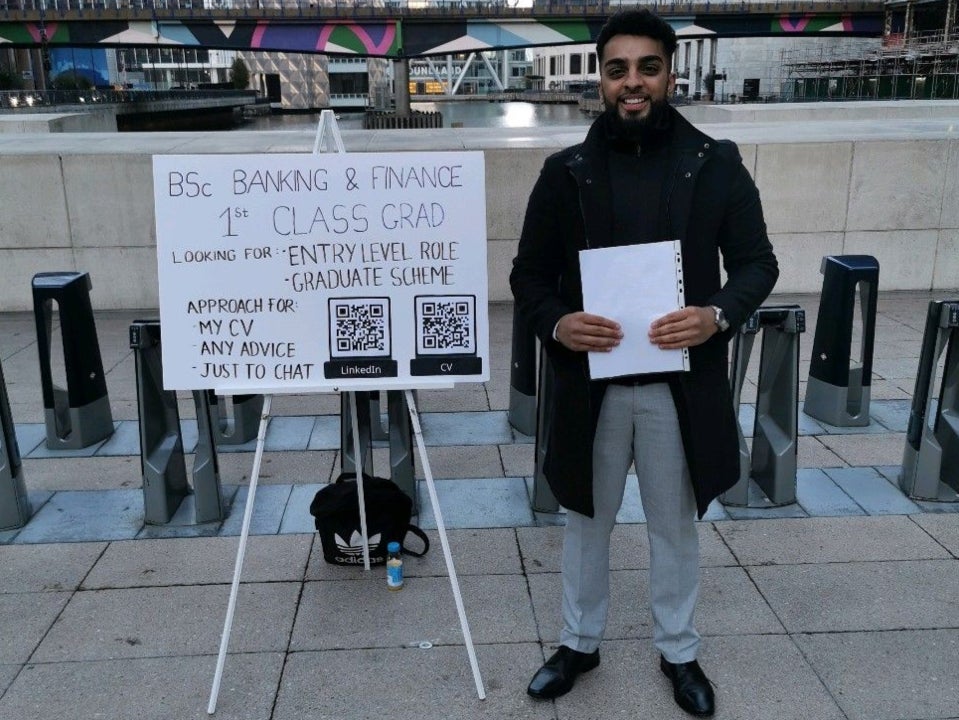 Haider Malik walked the streets of London with his own pop-up stand in Canary Wharf. He secured an interview in less than 3 hours, followed by a new job by the end of the week.

A 24-year-old man from London innovated with his job search methods – and got a job within a week.

Haider, a world-class degree in Banking & Finance from Middlesex University, became increasingly frustrated during Zoom interviews as the pandemic wore on because he was unable to show his personality. Haider took matters into his own hands and was inspired by his 67-year-old father, Mehmood Malik, who immigrated from Pakistan as a teenager and secured a job within a few days, and ventured into the bustling financial district.

He created his own pop-up booth using QR codes that directed potential employers to his resume and LinkedIn profile. Of course he felt “nervous” and “clumsy” at first, MyLondon said: “I didn’t know what I was doing, I thought it was really strange.”

“I had all of my résumés in my pocket. I stood empty-handed trying to look at people and hoping to meet people instead of being proactive and talking to them, ”he said.

When he started dealing with commuters, people gave him business cards and phone numbers – and before he knew it, one person offered to help and shared a photo of Haider on LinkedIn.

At around 9:30 a.m., he was offered an interview for a position as a treasury analyst at Canary Wharf Group.

“I had my car in the parking lot, so I took the board and took all my belongings with me.

“I thought ‘Wow, this is crazy’

“They interviewed me on the 30th floor of a building and I look over Canary Wharf and think, ‘Wow, I never expected to be interviewed here, let alone get a job’.”

The interview took place on the same day, followed by a second shortly afterwards on Friday. At the end of the day, he was offered the job.