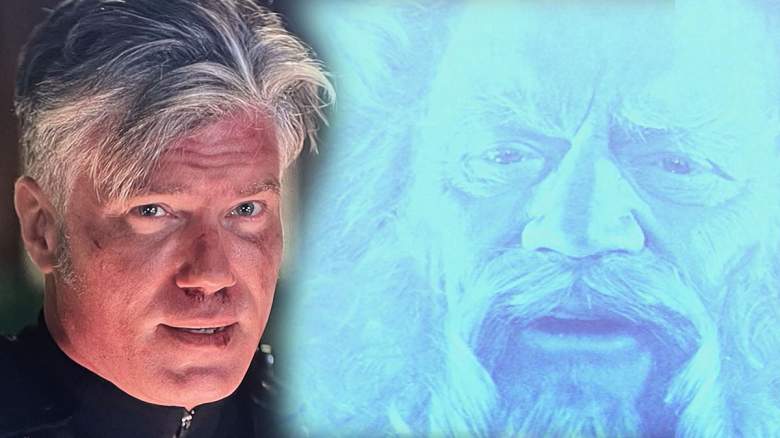 Shows like “Star Trek: Strange New Worlds‘ and ‘Obi-Wan Kenobi’ from Star Wars deal with characters created over 40 years ago. Both shows can go into the “way back machine” to pull creatures and characters from old stories and use them in these new programs. And both use this opportunity.

The fifth episode of Obi-Wan Kenobi saw Darth Vader (Hayden Christensen) at the peak of his powers, and perhaps at his most emotional. In the episode, Vader grows closer to his rival and former mentor, Kenobi (Ewan McGregor). Vader set a trap for his old master, but Kenobi used Vader’s emotions to escape.

Similarly, in the seventh episode of Strange New Worlds, Spock (Ethan Pick) also loses control of his emotions. Unlike Darth Vader, whose emotional outbursts involve killing members of his army and using the Force to stop an escaping freighter, Spock’s human side is kidnapped by a space pirate to take over the Enterprise.

Jesse James Keitel co-star as Dr. Aspen, later revealed to be Captain Angel, the leader of a gang of space pirates. Angel maneuvered Spock by manipulating his emotions and tricking him into allowing her access to the ship’s controls.

While longtime fans will enjoy the references to “The Original Series” throughout the episode – particularly references to the Vulcan that T’Pring (Gia Sandhu) will choose over Spock. This character, who first appeared in the classic episode, “amok time‘ is Stone. In The Serene Squall, Stonn is played by actor Roderick McNeil while he was originally played by Lawrence Montaigne.

The kiss between Spock and Nurse Chapel (Jess Bush) is an extension of Chapel’s affection, which was also seen in “Amok Time”. This episode aired in 1967 and Chapel was portrayed by Majel Barrett (Roddenberry).

And yet, Trek has featured many tales of pirates beyond Earth’s oceans. This includes the classic Next Generation episode, The Outrageous Okona, which starred actor Billy Campbell as a notorious con man and womanizer. Campbell would return to Trek, reprising the role for an episode of Star Trek: Lower Decks.

About halfway through the episode, Captain Pike (Anson Mount), Dr. M’Benga (Babs Olusanmokun), La’an Noonien-Singh (Christina Chong) and some other crew members captured by the pirates. As they were pushed through the Serene Squall spacecraft, a gnarled-looking alien with pale green skin and pointed ears appeared. While this individual could certainly have been any number of Trek species, it could have been a Reman.

That Reman has only appeared a few times in the Star Trek canon. Her first appearance was in the final chapter of the Next Generation movies, “Nemesis.” They reappeared in “Star Trek: Enterprise.” The race was an offshoot of the Romulans, who themselves were a variant version of the Vulcans.

Using a Reman as a villain for the pirate crew makes sense, however, since Romulans have not yet been encountered at this point in Star Trek canon history.

Fans may have noticed that T’Pring piloted a Vulcan ship with a familiar cockpit. For those who have seen”Starship Enterprise (2009)” knowing that T’Pring was sitting in a cockpit that looked almost identical to Spock’s ship, the jellyfish. The exterior of the ship wasn’t like the jellyfish, but the triangular interior was unmistakable. A nice nod to the creators of the Jellyfish, designer Ryan Church and comic artist Bryan Hitch.

The big reveal, which cannot be understated, came at the very last second of The Serene Squall, which gave fans just a glimpse of Spock’s siblings. No, not Michael Burnham (Sonequa Martin-Jones) from Discovery. We’re talking about Sybok, who appeared once – and only once before The Serene Squall – in Trek history. This appearance was in “Star Trek V: The Last Frontier.”

As Spock explained at the end of the episode, Sybok was his half-brother, born out of wedlock to his father Sarek. This mysterious figure was being held in a rehabilitation facility of which T’Pring was the director. It was Sybok that Spock believes Captain Angel was really after, and all manipulations were designed to hide this fact.

Laurence Luckinbill initially played Sybok, whose interpretation of the character resembled a charismatic space Jesus. He took control of the Enterprise to reach God. Kirk (William Shatner) and the rest of the crew joined in, and the adventure turned out to be a commercial disappointment.

Sybok’s appearance on the show actually ensures that “Star Trek V” is canon, as some fans wondered.

Heavy asked if Sybok would return to Star Trek in April 2021, and it turns out we were right. We also noticed that ‘Star Wars’ and ‘Battlestar Galactica’ actor Sam Witwer has stated that he wants to play Sybok. It is not publicly known who played Sybok in The Serene Squall.