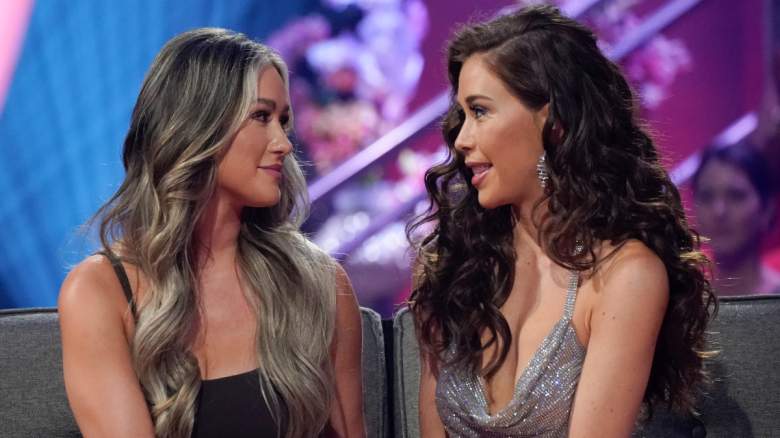 Rachel Recchia and Gabby Windey are retiring as co-leads on Season 19 of The Bachelorette. After a turbulent few weeks, they narrowed down their admirers to just one each: Tino Franco and Erich Schwer.

Will the women spurned on Clayton Echard’s season of The Bachelor get engaged? Are the potential couples still together? Who will distribute the roses next?

“Gabby and Rachel are both down to one man who is looking for love for life, but that doesn’t mean engagement will happen for these bachelorettes,” reads the episode description. “Both women will join Jesse Palmer as they watch the shocking conclusions of their journey live in the studio and across America.”

Erich Schwer is Windey’s last man standing on “The Bachelorette” in her final week. But as viewers have seen, the 29-year-old shared his desire to just date Windey.

“I love Erich with all my heart, so I want to propose from him,” Windey says in this week’s trailer. She adds: “I want to leave here engaged. If he doesn’t propose, I’ll be devastated.”

Despite their on-screen tension, Reality Steve reported that they are leaving Mexico as a couple. He wrote: “Whatever drama is happening in Mexico, it’s not like someone else is coming back for them. He’s the only guy left. They work through it and are together today.”

But the blogger has backtracked on previous claims that they are engaged.

“I’ve heard of the possibility that they might not have gotten engaged in Mexico and just ended their relationship, but I’ve never been able to confirm that,” Reality Steve continued. “The main thing I double checked was if they were still together and I was told they absolutely are.”

Since those reports, Schwer has been embroiled in a Jed Wyatt-type scandal. However, Reality Steve has doubled down on claims that the couple is dating.

“Last I heard Gabby and Erich were still together but that was last week,” he wrote in his latest blog. “I have no idea if/what this revelation from Amanda will do with their relationship. But if the Nate story I posted were addressed [“Men Tell All”]I have to believe this has to be brought to the ATFR in some way.

Erich Schwer will be taking over the ‘After the Final Rose’ stage and the question is will he address his recent scandals?

In September, a photo from Schwer’s high school yearbook showed the real estate analyst with a black face.

He issued a statement on Instagram, writing, “I apologize from the bottom of my heart for the insensitive photo of me in blackface from my high school yearbook that has been circulating. What I then thought was a display of my love for Jimi Hendrix was nothing but ignorance. I was naïve about the hurtful impact of my actions on the black community and those closest to me, and will forever regret my abusive and harmful behavior. I am deeply ashamed of my actions and understand that apologizing is only the first step in taking responsibility.”

Heavy was the subject of controversy again when Amanda Kaylor claimed on BachelorNation. Scoop that the two were dating until filming began and he had even met their son. According to her statement, he briefed her on the show two weeks before he left, calling the dating process “acting.”

Kaylor said he reached out after filming to wish her well, but not to rekindle their romance. Schwer has yet to address her claims.

Recchia gives Tino Franco her final rose and leaves the season to the general contractor, reports Reality Steve. “Tino really is the man of my dreams,” she said in a promo. “This is the day I’ve been waiting for my whole life.”

But after they left Mexico, their communication broke down and they eventually broke up.

Reality Steve explained on his blog that there was “a lull” and they “stopped talking or communication was poor.” He added that eventually she wants to return the engagement ring and just go out with Franco.

“Tino didn’t want that, but apparently never told her that it wouldn’t work for him because he was afraid of losing her,” explains the blogger.

Sometime during the “somber” part of their relationship, Franco kissed a girl during a night out. It is not known who the woman in question is, but the 27-year-old comes clean and tells the pilot it was only once.

“It was at that point that Rachel ended it with him. That’s the argument we see in the commercials,” writes Reality Steve. “I was told Tino knows he screwed up, apologized but Rachel checked out of the relationship. There seems to be no reconciliation at the ATFR. My guess based on what I’ve heard is that Tino would want that if Rachel had given him another chance back then, but he understood why Rachel made the decision she made. He broke her trust with his actions when he should have told her right away. Not to mention he shouldn’t have cheated in the first place.”

ABC promises “the new Bachelor makes his debut” live during “After the Final Rose”. So will it be one of Recchia and Windey’s former admirers, a fan favorite from a past season, or someone brand new?

While it’s not official until he takes the stage, Reality Steve reports that Zach Shallcross is expected to be named the Bachelor for Season 27 of the long-running dating competition.

“(SPOILERS): As we know, Caila was filming an intro video and we thought she was Bachelorette until they went with JoJo.” Reality Steve tweeted. “But from what I’ve been told, it will be Zach. And here is the footage sent to me today from last Saturday of Zach shooting his intro video in Austin.”

In the footage, the 26-year-old appears to be saying: “With that, yeah, it’s so exciting. Also frightening. Knowing that in the end there’s a chance this won’t work the way I want it to. But I gotta know, oh, this time it’s gonna be different. I learned my lessons from…”

Shallcross is a Tech Executive from Anaheim Hills, California and ranks third among Recchia’s applicants.

“Zach’s perfect woman is compassionate, kind and romance-ready because Zach looks forward to flaunting it,” reads his ABC bio. “He loves to plan thoughtful surprises and nothing makes him happier than seeing the excited look on his partner’s face when his meaningful gifts are appreciated. Zach is serious about finding love that will lead to marriage, so he’s ready for whatever grand romantic gesture it takes to get there!”

The three-hour second part of “The Bachelorette” Finale and “After the Final Rose” begins at 8 p.m. Eastern Time.