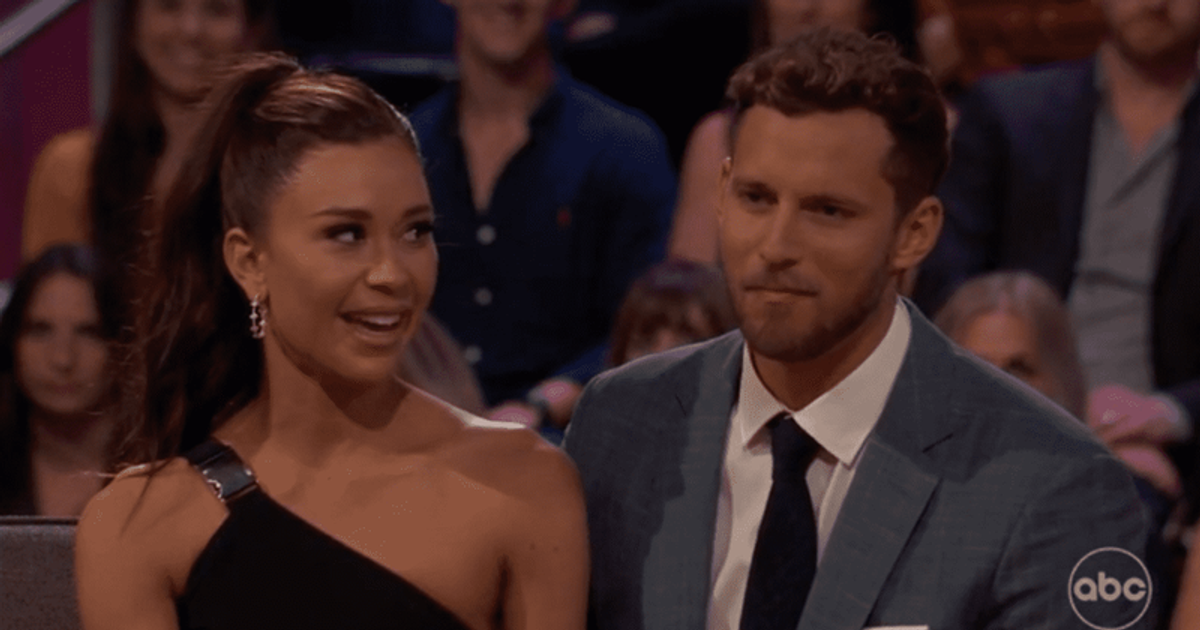 Fans slam show for saving Erich, saying, “They conveniently left out the text Erich sent to his ex AFTER he got engaged to Gabby.”

LOS ANGELES, CALIFORNIA: On the September 20 episode of “The Bachelorette,” the finale dropped a big bombshell. Erich Schwer decided to come out in the midst of a significant scandal, but the response they received from Gabby wasn’t what they were hoping for.

For weeks, viewers have watched as Gabby Windey and Erich Schwer’s love story grows on The Bachelorette, and despite various challenges, the couple managed to get engaged. Erich met Gabby’s grandpa John, the most popular senior of all time, on their first solo outing and their relationship took off from there. It wasn’t until they neared the finish line that the wheels began to loosen. Erich expressed reservations about getting engaged with the final episodes of the season. When it became clear that Erich was Gabby’s only option, the couple persevered and left the program engaged.

The After the Final Rose special, on the other hand, proved to be her toughest challenge yet. At the beginning of the September 20 episode, host Jesse Palmer mentioned text messages that had been released — messages Erich wrote to a woman he had seen just days before he left for the show. Erich’s ex-girlfriend released the messages in question, which contained some very incriminating information following his engagement to Gabby. On March 10, he wrote to her, “I know this isn’t ideal, I wanted to do this to see if I could still do something with my life,” he wrote. “I didn’t think it was a big deal but I understand how you feel, I’m sorry and I understand if you don’t want to see me anymore.”

Amanda, Erich’s girlfriend, explained, “You just expected me to keep dating you while you go on a reality show to ‘find love’,” to which Erich replied, “It’s not real,” adding added, “I’m really sorry I really didn’t think this through all the way through… I thought we could work this out.” I really didn’t mean to hurt you.” According to another text exchange, Erich stated that he was unhappy in his job and wanted a change, which led to his decision to appear on the show. The show began taping on March 22, but before leaving, he brought flowers to Amanda, according to her to make her “smile,” saying, “I’ll never stop thinking about you.” On July 10, he contacted Amanda again and said, “I’m so sorry Amanda, what I did was terrible, I don’t expect you to ever forgive me.” think of you all the time and you really deserve the best,” he reportedly said. “I will never forgive myself and I hope you find happiness and everything you deserve.”

Erich confesses to cheating on his ex-girlfriend in After The Final Rose. He continued by saying that he handled the matter poorly and used his participation on the show to end his courtship with Amanda. Despite the incident, he noted that he “wouldn’t change anything” because it led to his love for Gabby. Gabby, who shared the stage with Erich, said she was made aware of the news long before it was made public. “You were a bit of an asshole for her,” she admits. However, she stressed that committing to someone for life is not easy. What was really important was Erich’s effort to take responsibility for his behavior. “He’s kind and he’s honest, and I believe what he says.”

While they were wholeheartedly Team Gabby, some fans on Twitter couldn’t help but worry about their future. One fan asked if the show got Gabby and Erich to stay together so they have at least one successful engagement by the end of the season: “Did the production bribe Gabby to stay with Erich or ? Staying #TheBachelorette.” Some fans expressed their disappointment that Gabby was engaged to someone who cheated on her: “Not Gabby got engaged to a racist who wore a black face and also cheated on her #thebachelorette.” One fan also pointed out that the show left out part of the conversation in which Erich texted his ex after his engagement to Gabby: “They conveniently left out the text Erich sent his ex AFTER he hooked up with Gabby had engaged. #thebachelorette #bachelorette.” Seeing Gabby forgive Erich so easily made fans think she was “blinded” by his love. “Yes, I agree that Gabby is blinded because she wants Erich. I think it was a game for him and he wanted to win. He’s on TV and got noticed but I really haven’t seen it in the last 3 months #TheBachelorette.”

Other viewers criticized Erich for double-clocking two women, accusing him of using both: “Basically, Erich was with a girl and he told her to wait for him because he only went on the show to laugh …but then he kept getting a rose week after week after the ring…so he used both the girlfriend at home and Gabby #TheBachelorette. One fan believes Erich will end it soon with Gabby as he seems like a “confused guy”: “Erich is a confused dude who just lost his father and is trying to find meaning in his life. The show has been his distraction and he will break up with Gabby when reality sinks in. #TheBachelorette #Bachelorette #BachelorNation.” Some fans also felt that Gabby was “playing dumb” with this whole ex episode: “Do you think there will be more drama with Erich’s ex or Gabby will play dumb and not listen? #thebachelorette.” A fan also tweeted that Gabby is too good for Erich: “I always give players the benefit of the doubt because nothing about the show is normal, the producers are manipulative and everything is edited and not real, but also Gabby is way too good for Erich he is the worst #TheBachelorette.”