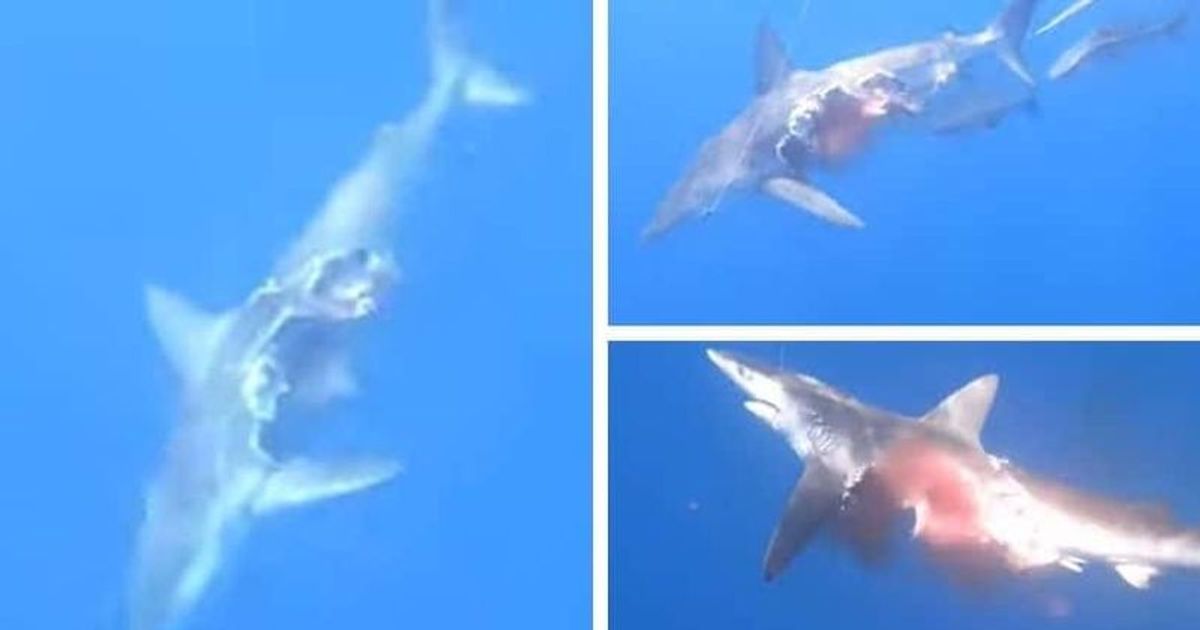 Dr. Mario Lebrato from Spain was just releasing a blacktip shark into the sea when he witnessed the animal being torn to pieces in a vicious attack

A scientist captured disturbing footage of a shark that continues to hunt for prey despite missing a large part of its body. The beast was eventually eaten in an act of shark-on-shark cannibalism, which is apparently a “fundamental characteristic” of them.

Dr. Mario Lebrato, 35, from Spain, was just releasing a blacktip shark into the sea when he saw the animal being torn to pieces in a vicious attack by his own kind. The scientist captured incredibly rare footage of the incident, which occurred off the coast of Mozambique about one to two meters below the surface of the Indian Ocean, The Sun reported.

Shortly after Lebrato and his group lowered the shark into the water, a group of predators sat on it and bit off pieces from the beast’s side. The researcher told the newspaper that the group included several bull sharks, some of which weighed nearly 300 to 400 kilograms. However, Lebrato and his team were amazed to see how the blacktip shark continued to search for prey despite the attack and a large part of its side was missing. The animal reportedly fought for about 20 minutes before succumbing to its injuries. “Sharks eat sharks, it is well known, but it is very difficult to film and document,” Lebrato told The Sun, which received the video footage.

In 2019, rare images surfaced showing the bloody aftermath of a brutal fight between two cannibal great white sharks. The disturbing photos supported theories that sharks often eat their own for food. “It’s not just a rogue shark that attacks other sharks, or even a species of shark that attacks other sharks. There are many different sharks attacking each other, ”said Professor Mark Meekan of the Australian Institute for Marine Science at the time.

According to the professor, these attacks are increasing in part because people are trying to protect themselves from the hungry predators in the sea. He explained that sharks, hanging from nets and hook lines, tend to send out distress signals that are picked up by rival predators in search of a simple meal. Dr. Lebrato’s shark was also attached to a hook in this video.

In the meantime, previous research has shown that the top predators have been cannibalizing each other for more than a millennium. According to The Sun, an examination of fossilized excrement from the prehistoric shark orthacanthus – which swam the oceans 300 million years ago – found it contained fossilized baby shark teeth. “Shark-on-shark predation is a fundamental characteristic,” Meekan explained. “300 million years ago they were cannibal sharks.”

According to the Daily Mail, some species of shark show cannibalism while still in the womb. For example, the female sand tiger shark has two uteruses and often produces six or seven embryos in each womb at a time, but they only give birth to two shark pups at a time. The discrepancy previously confused the scientists, but advances in technology made it possible for them to discover that the embryos are often conceived by different fathers at different times. This means that the oldest embryo can eat its siblings in the womb as soon as it develops eyes and teeth. “The oldest embryo develops teeth and eyes a little earlier and once it has these things it starts hunting and killing its siblings,” Demian Chapman (CORR) of Florida International University told the newspaper. “So they’re pre-natal cannibals, which is really wild.”