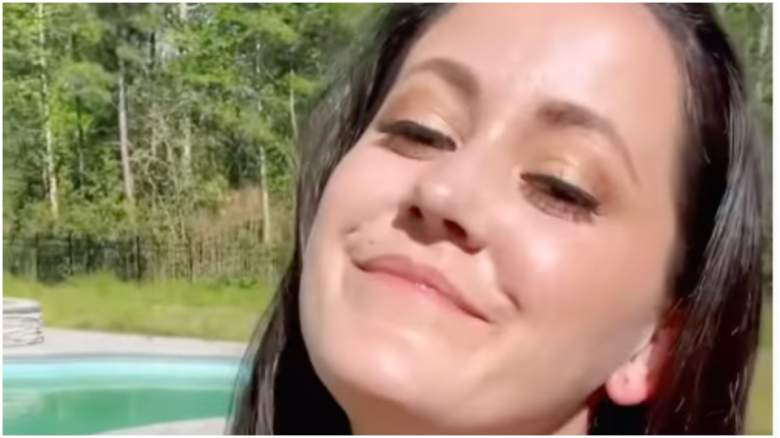 Jenelle Evans posted an Instagram Story about April 20, otherwise known as “Weed Day,” and the Internet had a lot to say about it.

On April 20, 2022, Evans took to her Instagram Story from her car. Wearing a green shirt, she sang along to the lyrics of “Because I Got High.” She captioned the story, “Happy 420.”

One person wrote, “I love the devotion and unwavering affection she shows towards drugs and alcohol while her children go unwashed and unloved.”

Another scathing comment read, “I was going to let David abuse my kids until I got high!”

And a third user wrote, “Not cute Jenelle. Feral and not cute.”

In a video from April 15, 2022, Evans quickly moved her head back and forth in what appeared to be a dance movement.

Once again, fans criticized the former reality star in a Reddit post titled, “Neck problems where.” Evans had previously shared with fans that doctors found a tumor in her neck that “hurt pretty bad.”

And in a March 2021 YouTube video, Evans shared that her neck was “cracking over and over again.”

Reddit users appeared to be confused with Evans’ mobility on the TikTok. One person wrote, “to be fair, this is probably her giving herself neck problems.”

Someone else wrote, “She makes me so annoyed. I actually suffer from chronic pain. Just had brain surgery 3 times recently. if I were to do any of her ‘moves’ (especially with her ‘condition’). I would like faint and die.”

On March 11, 2022, Evans revealed that she had been diagnosed with fibromyalgia. She told E! News, “For as long as I can remember, I would get extremely bad tension headaches and full body aches—like I had the flu, but wasn’t sick. My entire body gets in so much pain and sometimes I lay in bed and cry. [For] a long time, no one believed my symptoms until I got a second opinion from a new neurologist recently.”

Evans continued, “I want my kids to know that some days are good and some days are bad with fibromyalgia,” Jenelle said. “Please have patience with me on my bad days and I promise to make it up to you on my good days,” she said. “I have private talks with my kids about my health and let them know they don’t have to worry, some days won’t be good but I’ll get through it.”

In the post, she wrote that she was taking time to focus on her health. She added that she was hospitalized with chest pain. “They ruled out heart and lung issues in the ER. Since following up with my neurologist, their office has referred me to someone else who specializes in Myasthenia Gravis for a confirmed diagnosis. This new office will run more tests and one of them being another type of nerve study.”