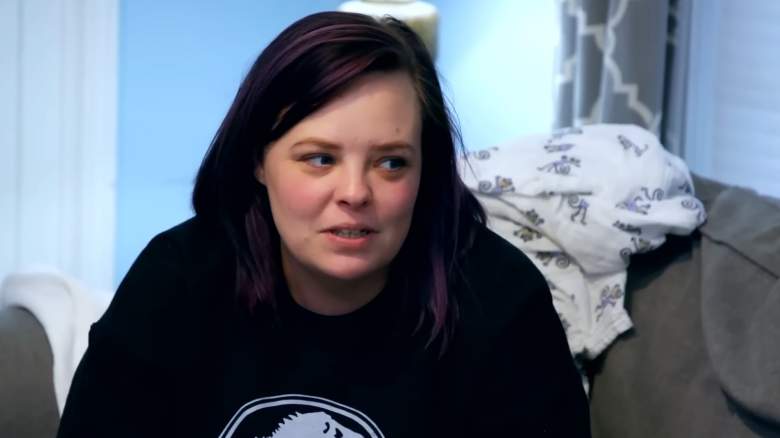 On Tuesday, September 20 episode of “Teen Mom: Next Chapter,” Catelynn Baltierra was hospitalized after something went wrong with her cyst removal surgery.

The incident happened due to a malfunction of Catelynn’s catheter.

At the beginning of the episode, Catelynn learned that she had to undergo surgery to remove a vaginal cyst. Speaking to her husband Tyler, Catelynn revealed that she was “nervous” about the upcoming surgery and the lengthy recovery time.

She explained that she would have to wear a catheter bag for ten days after the operation.

“Part of me just wants to step down,” she said.

Catelynn told Tyler she was worried she was asking too much of him as he would have to take care of the kids during the surgery and their recovery.

Tyler tried to allay Catelynn’s concerns by telling her this isn’t the first time she’s been “helpless” and citing past times when he’s had to step in and take care of the kids.

Catelynn said she didn’t want to put Tyler in that position again.

Tyler tried again to calm Catelynn and convince her to go through with the surgery.

“But it’s not like you – no one wants to be helpless. It’s like you’re in a situation you can’t control,” he told his wife. “You get your vagina cut open. So now you need help. You know what I mean? Tell you what, I wouldn’t feel bad if I had to get cut open. I’m like, ‘Girl, I’m sorry, I had to have my dick cut open. I’m serious, have fun with the kids all day.’ Give yourself a little wiggle room girl.”

Catelynn has had surgery, but unfortunately the story doesn’t end there. Shortly after returning home, something went wrong with Catelynn’s catheter.

The “Teen Mom” ​​star was taken back to the ER to have the problem fixed.

After the episode, Teen Mom fans took to Twitter to praise Tyler for handling the situation.

“[Tyler] seems such a good man, husband and father. His mother raised him well. #TeenMomNextChapter”, wrote one Twitter user.

“Naw Tyler was an inspiration” Another user tweeted. “Being with someone since childhood and still loving them unconditionally is not an easy task. He’s definitely a class need more men like him. #TeenMomNextChapter.”

“I like that Tyler is helping Catelynn realize it’s okay to need help.” added a third user.

“Tyler is a solid husband. He holds Cate accountable, but also shows her undying support at all times #TeenMomNextChapter”, a fourth user tweeted.

You can catch up on old episodes of Teen Mom OG and Teen Mom 2 on Philo. Click HERE to sign up for a subscription