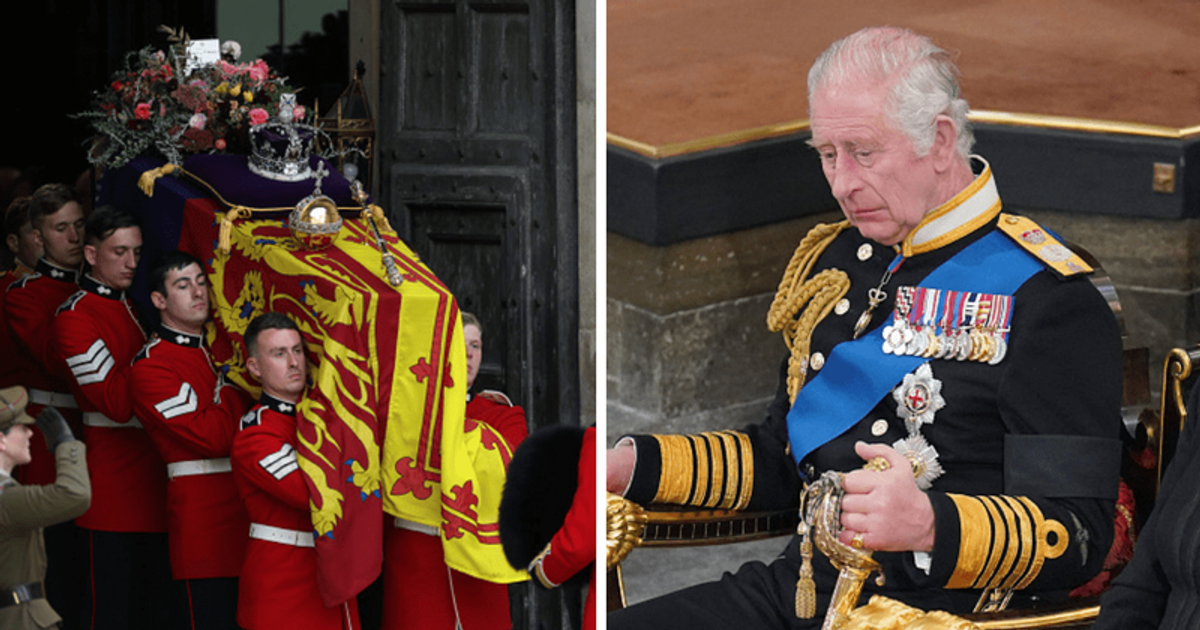 During the singing of the national anthem, the king was seen fighting back tears and maintaining his silence while his siblings sang along

LONDON, ENGLAND: A grieving royal family, led by a tearful King Charles, paid their last respects to the late Queen Elizabeth II at her state funeral. In a solemn procession, Her Majesty made her last journey from Westminister Hall to Westminister Abbey, where the funeral service took place.

At Westminister Abbey she married her husband Prince Philips and was crowned Queen of England – two of the most significant events of her long life. In a touching farewell to the longest-reigning monarch in modern history, the royal family bid farewell to their queen and matriarch.

Upon her arrival at this historic church in Britain, Her Majesty’s coffin was placed near the altar. The coffin was draped with a standard royal flag, crowned with her crown, orb and scepter, and surrounded by the flowers chosen by the king from the royal gardens. The king also paid tribute to his beloved mother by placing a card on the flowers on the coffin. “In loving and devoted memory. Charles R.” read the card.

The Dean of Westminister then pronounced a blessing as the Archbishop of Canterbury saluted the Queen for her “rich life and loving ministry” as he delivered the homily at her state funeral. After the Archbishop’s commendation over the Queen’s coffin, the Last Post was blown by the State Trumpeters of the Household Cavalry. To mourn the Queen’s death, the national anthem was sung by the congregation.

Accompanied by his siblings, the new King Charles looked tearful during the service. He even wiped away a tear as he led the procession to Westminister Abbey. During the singing of the national anthem, the king was seen fighting back tears and maintaining his silence while his siblings sang with the congregation. Charles was comforted by his sister Princess Anne, who walked at his side. Prince Andrew also looked dejected and fought back tears as the family marched through Parliament Square behind the Queen’s coffin.

The family then took their places alongside leaders from around the world who had gathered at the British Church to mourn the death of the Queen. The head of the family, King Charles, sat in the front row next to Princess Anne, while the Duke and Duchess of Sussex sat in the second row, just behind him. Prince Williams and his wife Kate Middleton also sat in the front row. The Prince and Princess of Wales were accompanied by their children Prince George and Prince Charlotte, who shared a close bond with their great-grandmother.

The strains of the lament, “Sleep, darling, sleep,” echoed through the abbey as the piper walked away. The king held his sword and seemed very emotional and dejected as he tried to keep his composure while staring at the coffin of his “beloved” mother.

Britain’s main church, packed with 2,000 VIPs including Prime Ministers, Presidents and the Queen’s family, was calm save for the sound of hymns and prayers at a funeral service Her Majesty herself curated before her death. Outside the Abbey, an estimated 2 million people gathered along the processional routes in central London and watched the service on large screens.

The funeral procession for the Queen’s coffin from Westminister Hall to Westminister Abbey began at around 10.45am. The State Gun Carriage carrying the Queen’s coffin arrived at the church just before 11am. A single toll from Big Ben signaled the start of services at Westminster Abbey, where kings and queens have been crowned and buried since 1066. Her Majesty is buried in Windsor alongside her beloved husband Prince Philip and her parents, George VI and the Queen Mother.