TACOGATE! Jill Biden hit out for apologizing to the Hispanic community through her spokesman 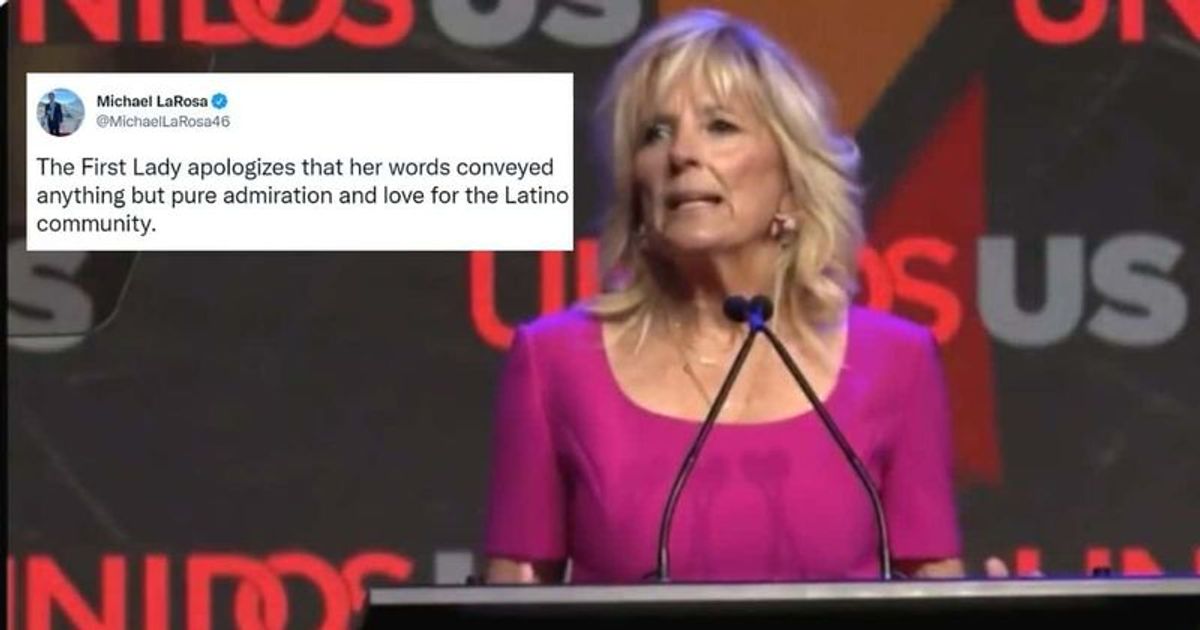 Jill Biden said during a speech in San Antonio Monday, July 11, that Texas Latinos are as “unique” as “breakfast tacos.”

First Lady Jill Biden apologized for saying Texas Latinos are as “unique” as “breakfast tacos” when speaking Monday, July 11 at the 2022 UnidosUS Annual Conference entitled “Siempre Adelante: Our Quest for.” Equity” in San Antonio. “The First Lady apologizes that her words are anything but pure admiration and love for the Latino community,” Jill’s rep Michael LaRosa tweeted.

“Rough [Yzaguirre] helped build this organization with the understanding that the diversity of this community — as unique as the bodegas of the Bronx, as beautiful as the blooms of Miami, and as unique as the breakfast tacos here in San Antonio — is her strength,” Jill said in one Speech to the UnidosUS group.

‘She apologized to who… you?’

The first lady was also trolled for mispronouncing “bodega” during a speech to a Hispanic advocacy group. During a speech in San Antonio, Texas, Jill pronounced “bodega” as “bow-get-taas,” a pronunciation closer to the Colombian capital “Bogotá” than the standard pronunciation “bow-day-guh.” In her speech, Jill praised the Bronx’s “bow-get-taas.” In the US, a bodega refers to a small neighborhood grocery store. Today, it’s used by residents of all ethnicities, originating from the Puerto Rican residents of NYC.

Her comments were blasted by Republicans who argued they show why Democrats will lose Hispanic voters. The National Association of Hispanic Journalists (NAHJ) responded to Jill’s comments. “NAHJ encourages @FLOTUS and her communications team to take the time to better understand the complexities of our people and communities,” the association wrote. “We’re not tacos. Our heritage as Latinos is shaped by different diasporas, cultures and food traditions. Don’t reduce us to stereotypes.”

However, the internet isn’t going to settle for Jill’s apology. A number of social media users said the first lady should have apologized directly from her own account. “She apologized to who… you? Will she make a public statement or not?” wrote one user on Twitter. “She didn’t say it. But of course you would accept an apology by proxy. She called you a friggin’ taco… and you’re like, “Meh…,” said another user. One user said: “Don’t you mean the ‘Latinx’ community? As long as you keep using a word that NO HISPANIC actually use, no one will believe Jill Biden’s apology for comparing Hispanics to tacos.”

“It’s a shame ‘Doctor’ Jill doesn’t have her own Twitter account. Wait!! she does!! @FLOTUS!! I think apologies to the pawns are secondary to her suer wrote, while another said, “Jill Biden didn’t tweet an apology herself because she doesn’t know she apologized yet.” “Why is Jill’s publicist giving an explanation instead of Jill herself away? She said the words, now SHE should apologize.