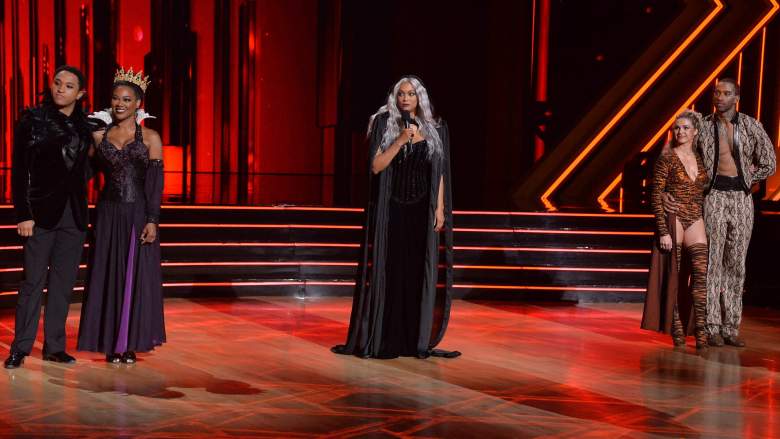 The elimination process of ABC’s “Dancing With the Stars” puzzled some fans after a heartbreaking elimination aired on the Villains Night portion of Disney Week on Tuesday, October 12, 2021.

Then the bottom two pairs were brought before the judges for rescue. This time, those couples were Kenya Moore and Brandon, and Matt James and Lindsay Arnold.

Tyra Banks stated that the judges would each select a couple to save, and if there was “a split decision,” Len Goodman would make the final decision.

To many fans it sounded like Len Goodman only had the last word in a tie, but that’s not how the rule works.

Since there are four judges instead of three this time, there’s a chance of a tie, but when Derek Hough, Carrie Ann Inaba and Bruno Tonioli fail to unanimously choose a pair to save, Len Goodman intervenes and casts the final vote. Basically, this means that Goodman’s vote counts for two votes instead of one, otherwise his vote would be a tie.

When both Carrie Ann Inaba and Bruno Tonioli decided to save Matt James, and Lindsay Arnold and Derek Hough decided to save Kenya Moore and Brandon Armstrong, Goodman’s vote for Moore and Armstrong meant that James and Arnold were sent home .

Some viewers were confused about how the process worked after Moore and Armstrong were saved.

“The judges weren’t ‘undecided’ until Len voted for Kenya. It was 2-1 for Matt. When Len voted for Kenya and made it 2-2, they should have just sent home the person who had the lowest amount. That would have been the FAIR way. len shouldn’t have got the last save. ” a person tweeted.

Another wrote “Confused about the judges save. If Matt got 2 votes and Kenya got 1, how did Lens vote save Kenya? (Not that I think Matt deserved to be over her, just very confused). “

“I’m trying to figure out your math. 2-1 voting doesn’t need a tie-breaker. Bring back @ mattjames919 #DWTS. ” another user tweeted.

The fact that the actual lowest-scoring couple, combined with votes, were sent home immediately made some viewers believe that James didn’t even go into the elimination among the last two, which some consider to be unfair.

“Was Matt even in the bottom 2? Tonight’s decision smells of injustice “, a person tweeted.

Others wondered if their voices even mattered in the end.

“What’s the point of letting us vote when Len has the last word anyway ???” That wasn’t a tie-breaker! Len had no respect for Matt from the start and it showed up tonight. ” a person tweeted.

After two consecutive seasons of bachelor nation winning Dancing With the Stars, with Hannah Brown taking home the Mirrorball for season 28 and Kaitlyn Bristowe for season 29, it’s no wonder some people are surprised were to see James, who was a new “Bachelor” who was voted out so early.

CONTINUE READING: ‘Dancing With the Stars’ viewers compare Tyra Banks to a Wookie and say to ‘fire’ her stylist