‘Signs from Heaven’: Rainbows appear over Westminster and Windsor on the eve of the Queen’s funeral 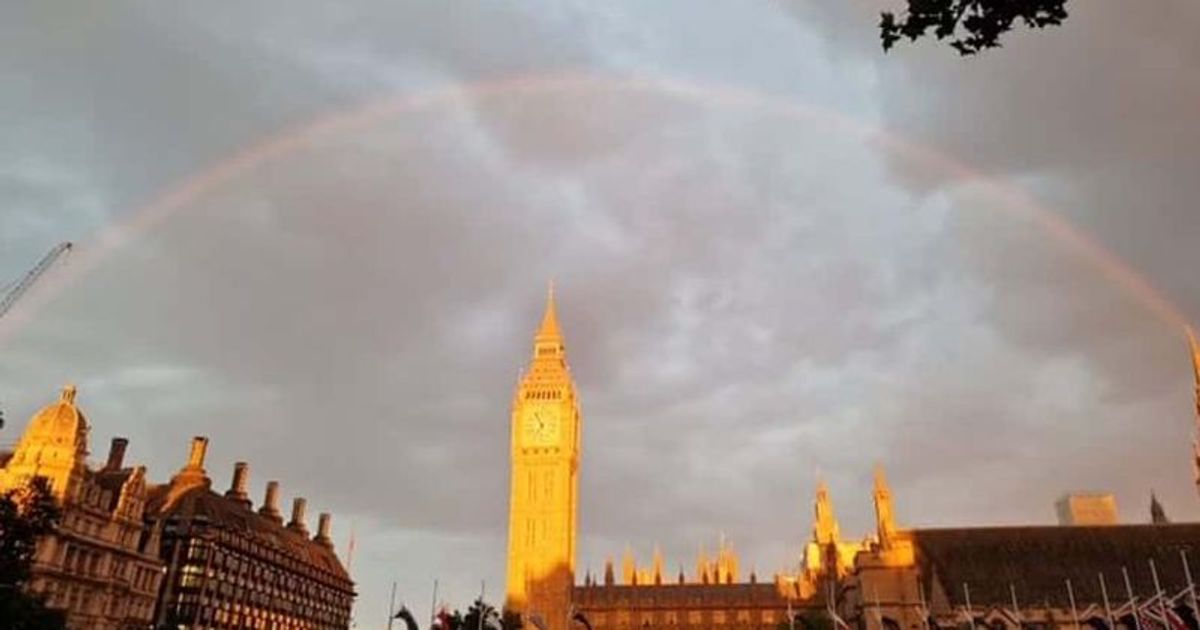 Windsor Castle was the whereabouts of Queen Elizabeth II, particularly after the death of Prince Philip

LONDON, UK: On the eve of Queen Elizabeth II’s funeral, rainbows were seen over Westminster and Windsor as Londoners admired the beautiful crimson skies over Big Ben on Sunday September 18. The Queen, who has served as the nation’s foremost figurehead for more than 70 years and the longest reigning monarch in British history, appeared to be getting a final goodbye from heaven.

Elizabeth II frequently stayed at Windsor Castle, particularly after the death of her husband, Prince Consort Prince Philip, in April 2021. The tower that houses Big Ben’s bell also took its name from Her Majesty. It was renamed the Elizabeth Tower in 2012 to celebrate her Diamond Jubilee. Rainbows could also be seen over the line of mourners who had waited all night to see the Queen in state. On the day of the Queen’s death, September 8, rainbows were observed in front of Buckingham Palace and Windsor Castle.

The biggest security operation London has ever seen takes place for the Queen’s funeral. With hundreds of thousands of people gathering in central London and a guest list of 500 dignitaries, Mayor Sadiq Khan claims Monday September 19’s funeral posed an “unprecedented” security concern.

“It’s been decades since so many world leaders have been in one place,” Khan said. “This is unprecedented in terms of the different things we are juggling. There could be evil people who want to harm individuals or some of our world leaders,” he told The Associated Press. “So we’re working incredibly hard – the police, the security services and many, many others – to make sure this state funeral is as successful as possible,” he said. This operation is bigger than the London 2012 Olympics, according to Metropolitan Police Deputy Assistant Commissioner Stuart Cundy.

“Our response here in London will be proportionate and balanced, and officials will only take action where absolutely necessary,” he said. Metropolitan Police Commissioner Mark Rowley said the aim is to keep the event safe “and to try to do that as quietly as possible as this is obviously a solemn occasion”.

More than 10,000 police officers will be on duty Monday, including additional officers from each of the UK’s 43 police departments. Hundreds of volunteer marshals and military personnel will serve as stewards along the parade path. They are just the most striking aspect of a security operation managed from a state-of-the-art command center near Lambeth Bridge and not far from Parliament. Garbage cans and street gullies are checked and sealed. Police spotters will be on the rooftops, as well as sniffer dogs, sea police officers and mounted police steeds in the streets.

To prevent aircraft noise from disrupting the funeral ceremony, flying drones over central London has been temporarily banned and Heathrow Airport is canceling a large number of flights. The difficulty for the authorities is to protect 500 international leaders without disrupting too many diplomatic relations. Except for US President Joe Biden, who is expected to arrive in his guarded vehicle called The Beast. Dignitaries gather outside the grounds before being transported by bus to the abbey.

Nearly a million people will crowd into Westminster Abbey and along the path that the coffin will take after the funeral, via Buckingham Palace to Hyde Park. It will then be transported by hearse 20 miles away to Windsor, where 2,000 other police officers will be on duty. The Queen will rest with her late husband at St George’s Chapel in Windsor Castle.