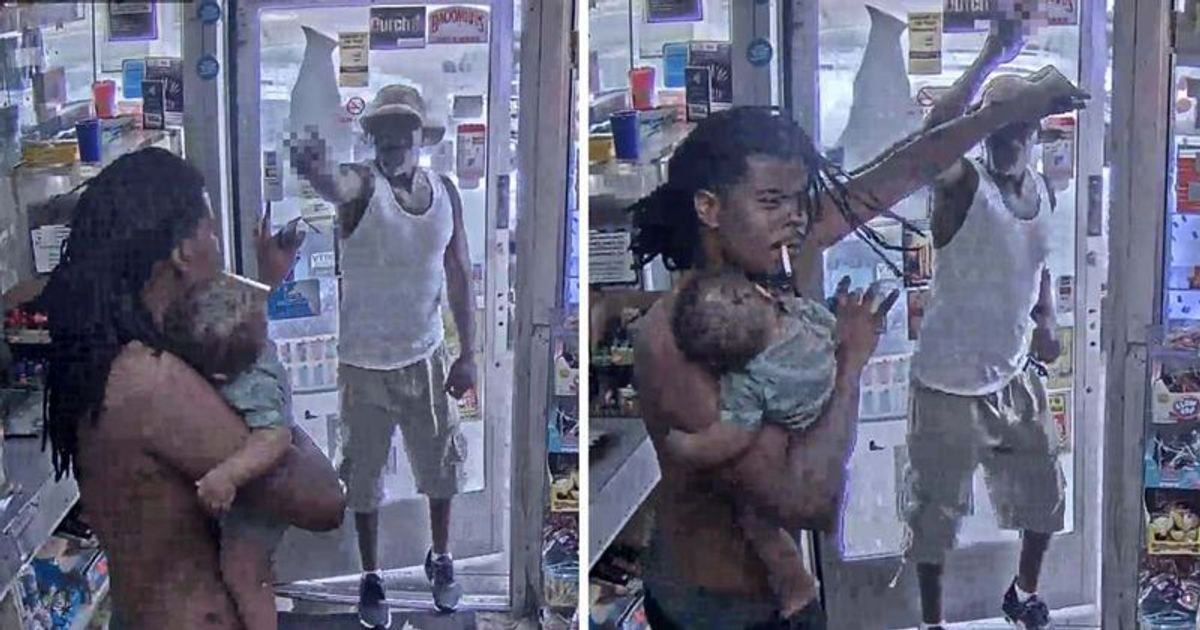 DETROIT, MICHIGAN: Horrifying surveillance video shows a Michigan man pointing a gun at a father holding his baby at a gas station. An argument ensues as the father waves his arms in front of the gunman to grab the gun. The incident happened on Sunday, June 19, at a gas station on the corner of Hubbell Avenue and Tireman Avenue in broad daylight in Detroit.

The suspect steps out of the store and fiddles with his gun, which investigators believe may have jammed when the sleeping seven-month-old baby’s father tried to grab it. One person was taken into police custody and an investigation into serious bodily harm is ongoing. Investigators believe the man pointed the gun at the father after an argument between the two. However, it is unclear whether the suspect and the father knew each other.

Another similarly shocking video that surfaced in Michigan earlier this month shows a 12-year-old boy armed with a gun and holding up a gas station. Footage showed the boy standing in line while a customer in front of him paid for gas. Reaching the front of the line, he pulled a 9mm pistol from his black pouch and demanded money.

When the cashier questions his motive. The boy is then seen putting a bullet into the ceiling, after which she hands him the money and orders him to “get out”. The boy tried to reload his gun as he left, but it jammed. One of the shell casings fell to the ground and he calmly walked out. Shortly after the incident, 911 dispatchers received the call about the armed robbery at the Marathon gas station on East Main Street. The gas station is one block from the police station. The teenager was soon arrested, Hartford Police Chief Tressa Beltran revealed, and he also mentioned that the teenager was charged with armed robbery, assault with a dangerous weapon and disposal of a firearm in Van Buren County Family Court this week. Officials said the boy told a classmate about his plan to carry out the armed robbery. He reportedly took the gun from his grandfather’s locked safe. The boy’s grandfather said he was unaware that the child could access the safe.

These incidents come amid an ongoing discussion about ways to curb gun violence following the Uvalde school shooting. On May 24, a deadly massacre occurred at Robb Primary School in Uvalde when 18-year-old Salvador Ramos barricaded himself in a classroom and massacred 19 students and two teachers. The police faced harsh criticism for allegedly failing to stop the shooting quickly enough and to arrive in time to rescue the victims. Ramos was shot dead by an off-duty Customs and Border Protection agent from an elite tactical unit.