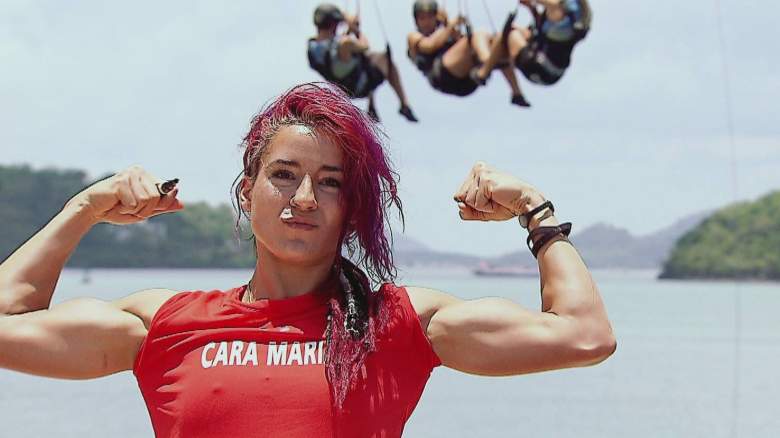 It wouldn’t be “The Challenge” if there wasn’t some drama and shots between co-stars over comments made, but a recent interview with Cara Maria Sorbello and Paulie Calafiore seems to have struck a nerve with several of the show’s stars and let them in shoot back on social media.

A clip from a US Weekly Podcast starring Cara Maria and Paulie has been making the rounds on social media in which the couple takes shots of the show’s current veterans. On the segment, Paulie said this season’s vets “convinced the entire ‘Challenge’ fandom that real competitors should no longer be on the show,” particularly competitors like Theo Campbell, Turbo Çamkıran, Cara and Paulie, Mattie Lynn Breaux and Georgia Harrison.

“They won over the entire ‘Challenge’ fandom… that competitors like Josh [Martinez], Devina [Walker], Kyle [Christie], Aneesa [Ferreira] and Nany [Gonzalez] are all good. “He said they convinced” Challenge “fans to find an easy way to the finals. Here is the clip:

After the video became widespread on Instagram and Twitter, several cast members from “Spies, Lies and Allies” slammed the two former “Challenge” stars. Devin tweeted“The level of pathetic deception that some ex-challengers openly display is embarrassing if you just quit while you’re behind it.”

A Challenge Instagram account (now deleted) shared the clip and in the comments Josh wrote, “You don’t have to worry because you don’t get any callbacks.” Michele Fitzgerald commented, “We have no brains,” while Emanuel Neagu commented, “They know what they’re doing, they’re hungry, but when they get on the show they leave the first.”

Hughie Maughan wrote: “Have you ever experienced such despair in your entire life. If you have to do that, it says it all, it wasn’t smart, nobody knew each other and didn’t trust the vets, just like that. ”A screenshot of the interactions was saved and shared on Reddit.

Paulie later took to Instagram to reply to Devin’s tweet and fired a shot of her own at the “Are You the One?” Star. He replied to a fan account who shared the clip with the comment: “Didn’t this guy apologize publicly? You wanna talk about pathetic. ”Although he didn’t clarify his comment, Paulie was probably referring to a video Devin made for“ Double Agents ”before returning to“ The Challenge, ”referring to his explosion with Johnny Bananas in“ Final Reckoning “related.

Paulie’s comment was likely related to a video Devin made prior to appearing on The Challenge: Double Agents, his first season since his big fight with Johnny Bananas on Final Reckoning and the reunion. In the video, Devin addressed his mistakes in the situation and said what happened was “embarrassing”.

Devin saw Paulie’s comment more clearly than he did later tweeted, “Can someone please show me that excuse? I would like to see it. ”So did he called, “How petty do I want to be today …? Receipts are a wonderful thing. ”Several fans responded to his tweet with a short clip of his video in which Devin acknowledged his“ poor character portrayal and really poor judgment ”.

Regardless, the video does not contain an apology to Bananas, as Devin already mentioned in a podcast appearance on “Challenge Mania” last season. He told hosts Scott Yager and Derrick Kosinski, “I’ve been confirmed”. [on ‘Double Agents’] long before this video, ”Devin said at the time. “When you realize you made a mistake, there is no shame in admitting it. It is more of a shame to make a mistake and not admit it and double it up. “

Other than that, it wasn’t an apology video, he explained. “When you watch this video there is never really a big apology, everyone calls it an apology video. What it really is is a property video … It had nothing to do with getting back on the show, it had nothing to do with being told to do it. I knew I was going to get back on the show and I didn’t want to have this conversation and risk it being edited in a certain way or taken out of context. “