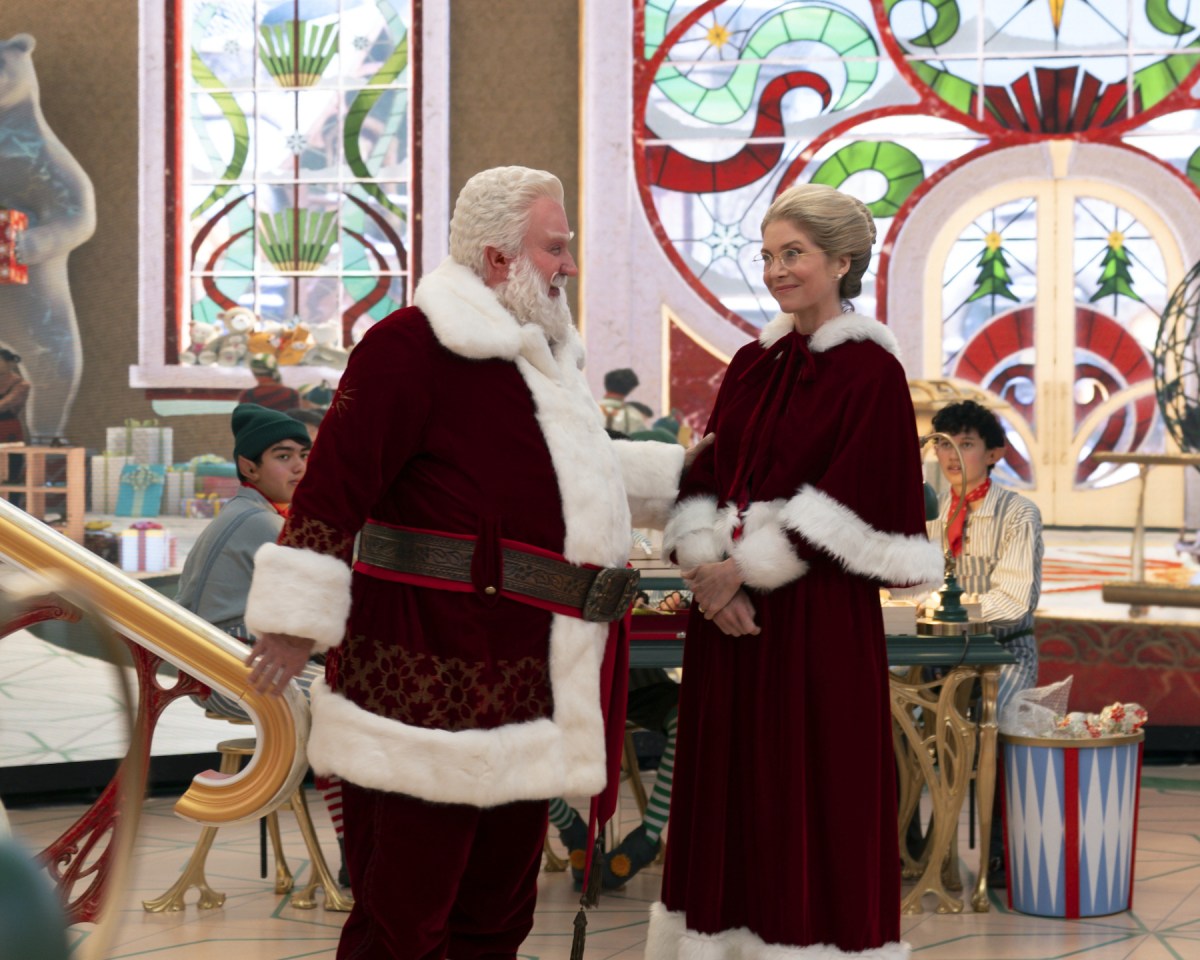 The Santas went down the chimney to Disney+, and the series reunites Tim Allen and Elizabeth Mitchell as Santa and Mrs. Claus. The pair reprise their roles Santa Claus movies. And judging by Mitchell’s claim that Allen makes her laugh until she’s in pain, they’re having a blast being back at the North Pole.

RELATED: How many episodes of ‘The Santa Clauses’ will there be?

That’s right, Tim Allen and Elizabeth Mitchell are getting back in the holiday spirit the Santas, Disney’s offshoot of Santa Claus movies. The pair return as Santa and Mrs. Claus, and they’re just as funny as ever – even if their characters are feeling the effects of the times.

The Santas begins with Scott Calvin having several bouts of ill health that indicate his magic is waning. Scott realizes he needs to retire and sets out to find a new Santa to replace him. And Mitchell’s Mrs. Claus supports him in this endeavor, ready to depart from the North Pole herself.

The two clash well during the two-episode premiere. And it seems their on-screen demeanor reflects the mood behind the scenes.

Elizabeth Mitchell and Tim Allen seem happy to be back The Santas and work together again. During an interview with Forbes, Mitchell reflected on her reunion with her Santa Claus costar. She revealed that behind the scenes Allen keeps her in a good mood – as does his family, who showed up on the set of the Disney+ series:

Mitchell isn’t the only one who enjoyed playing alongside Allen, either. Not all in The Santas Cast had experienced it before, but many of them had positive things to say.

As well as talking to Elizabeth Mitchell about it the Santas, Forbes has met with several other cast members. They were also considering working with Tim Allen, acknowledging that he brings a great deal of humor to the set.

Noel actor Devin Bright echoed Mitchell’s sentiments, recalling, “He’s always super funny. He jokes off-camera – he’s just as funny off-camera as he is on-camera, but he’s more than welcome to flip the switch once the cameras start rolling and get to his character.”

Harold & Kumar‘s Kal Penn, who plays Simon Choksi – a possible successor to Santa Claus – also revealed that there is a surreal aspect to working with Allen. Like many viewers, he grew up with it Santa Claus Movies every holiday season. That’s how he came into the role as both a fan and a colleague.

“Obviously I’m a huge Tim Allen fan,” admitted Kal. “The same goes for Elizabeth Mitchell. I think the first Santa Claus The movie came out when I was in high school, so it quickly got into the classic Christmas movie rotation.”

Needless to say, the cast of The Santas clicked – and the chemistry shines through. Hopefully it stays that way for the rest of the season.

New episodes of The Santas Stream every Wednesday on Disney+.

RELATED: ‘The Santas’: Tim Allen ‘forgot how much’ he ‘hated’ wearing the Santa suit.