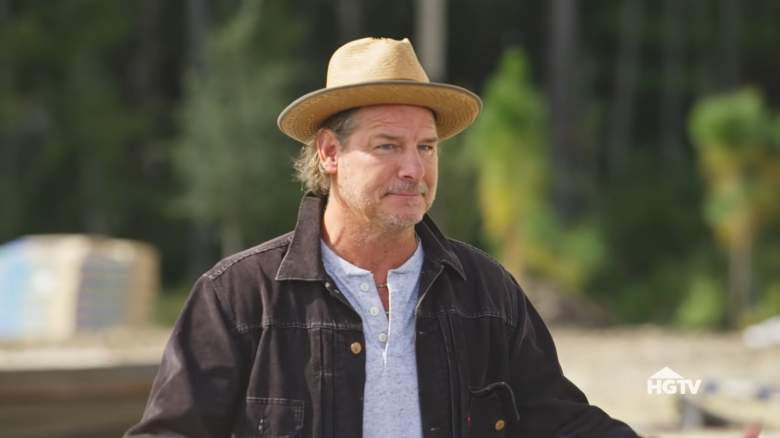 HGTV’s “Rock the Block” host Ty Pennington didn’t always envision a successful career in television and home renovations. Long before he found fame as the host of HGTV’s Trading Spaces and ABC’s Extreme Makeover: Home Edition, Pennington began his career as a model. In a 2012 blog post, Pennington reflected on the beginnings of his career, saying that this period of his life gave him the opportunity to travel, see the world and gather inspiration for his later design work, which he still carries with him to this day.

This week, Pennington looks back on his modeling days in a new Instagram post, in which the presenter recreated one of his old J. Crew campaign photos. The first photo in the post shows Pennington, now 58, sitting outside in a polka dot swimsuit with shaving cream on his face and a razor in hand. The next slide shows the original campaign from 30 years ago, which features a 27-year-old Pennington shaving on the beach in the same pose (though in a different polka-dot swimsuit) as his older self.

Ty Pennington’s throwback post shared the story behind getting the J. Crew campaign and why he wasn’t able to expand his modeling career the way he would have liked after the campaign came out.

“Looking back, I remember the absolute shock when I heard I was on the @jcrew cover. This one picture finally gave a glimmer of hope to my sad attempt at being a professional “male model”. My career seemed to explode overnight…but alas, fate had other plans,” Pennington wrote, “Just a week later I would be involved in a horrific car accident – catapulted out of a roaring Jeep and skidded on my bum across a razor-sharp road. Somehow I survived… unfortunately not my buttocks 😂😐 The staples and stitches couldn’t revive my newly found “Body of Work” in model making. So after my brother left my only portfolio of pictures in his unlocked car (which someone found and used as toilet paper – no, really 😳), I hung my only decent head picture, grabbed my trusty tool bag and went back to the build and Carpentry. 9 years later I got a call to audition for Trading Spaces… and the rest is ✨ history ✨”

Friends and fans alike flocked to Pennington’s post to discuss his 30-year transformation as well as his younger self’s car accident that led him back into construction.

Commenting on the post, The High/Low Project host Sabrina Soto wrote, “Verified
I love this story! Trust the universe. 🙌”

The @lostjcrew account, which documents J. Crew campaigns “before the internet” (1983-1997), also chimed in, saying, “❤️ Remember this shoot like it was yesterday. The universe had bigger plans for you!!🥰 (and 58 beats 27 for its money!!)”

Ty Pennington is currently gearing up for the return of his hit HGTV show, Rock the Block, which pits two fan-favorite HGTV designers against each other as they renovate identical homes on the same block. The show’s fourth season was announced in October 2022, with filming wrapping later that month.

Season 4 is set in Berthoud, Colorado and features four teams of two: Bryan and Sarah Baeumler (from “Renovation Island”), Michael Smith Boyd and Anthony Elle (from “Luxe for Less”), Jonathan Knight and Kristina Crestin (from ” “Farmhouse Fixer”) and Page Turner and Mitch Glew (from “Fix My Flip”).

With that, season four is on track to begin in March 2023, as confirmed in the original renewal announcement, although the official premiere date has yet to be announced.

Who is Jonathan Irons? WNBA star Maya Moore’s husband has been in prison for over 23 years

Who is Jonathan Irons? WNBA star Maya Moore’s husband has been in prison for over 23 years