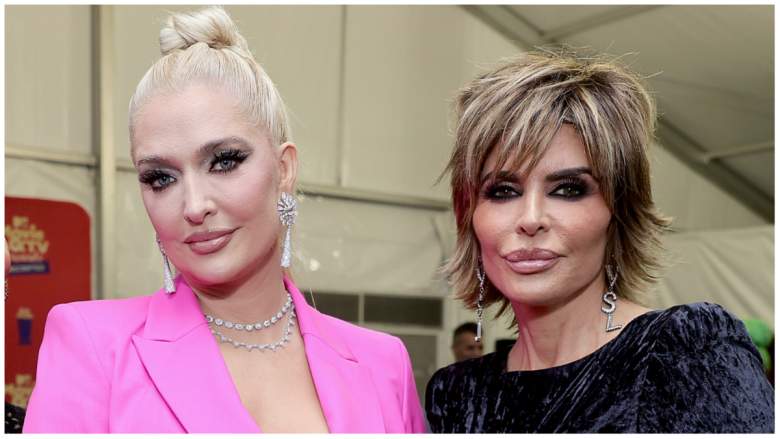 Many of the cast of “Real Housewives of Beverly Hills” are still reeling from a rocky season 12, but a segment of the group seems to have survived the aftermath.

Months after filming an explosive cast trip to Aspen and a tearful reunion that led to major rifts in the friends group, three RHOBH stars went out on a group date for a landmark event.

RHOBH fans know that after taping the Season 12 reunion, several cast members didn’t speak to each other. During a September 2022 appearance on Watch What Happens Live, Erika Jayne revealed that the reunion ended with a first: “Neither of us took a cast photo and neither of us hugged as we left,” she revealed.

But a few months later, three of the co-stars were out and about together, two of them with their husbands. In photos shared on Instagram, RHOBH Season 12 newcomer Diana Jenkins was seen posing with her fiancé Asher Monroe as well as Lisa Rinna, her husband Harry Hamlin and singles co-star Erika Jayne. The group was photographed in an outdoor concert hall for an Elton John show, and another pal could be seen in the background “photobombing” them. “Photobombed by one and only @davidfurnish,” Jenkins captioned the pic, referring to the singer’s husband.

In another video shared on Instagram, actor Neil Patrick Harris and his husband David Burtka could be seen in the same section as the RHOBH group as they all sang to Elton John’s classic Tiny Dancer.

On her Instagram Story, Rinna shared a picture of the group’s “roadie” soda cups in their limos and VIP wristbands for the show. She also shared a video of her dancing with Hamlin.

Fans reacted to the photos of the RHOBH stars, with some calling Rinna, Jayne and Jenkins the “Dream Team”. Others said the trio deserved a spinoff show of their own.

This isn’t the first time the three RHOBH stars have gotten together since filming wrapped. In October, Erika Jayne posted an Instagram selfie titled “Nights in Malibu” after a night out with Jenkins and Rinna.

According to Yahoo Entertainment, the Elton John concert attended by the RHOBH stars was held at Dodger Stadium in Los Angeles and was the singer’s final stadium show in North America.

It’s no surprise that Jenkins and her gang were able to snag VIP tickets to the sold-out show. Jenkins is close friends with the music icon. Ahead of her debut on RHOBH, Sir Elton even sent her a video message, which she posted to Instagram. “I’m already @eltonjohn and @davidfurnish’s favorite housewives,” Jenkins captioned the clip. “Very jealous? lol.”

Rinna also claims to be friends with the Grammy winner. She previously revealed that Elton John personally invited her and her husband to his annual Oscars party.

“We’ve been going to the fabulous Elton John Oscars party for years. I remember going in 2006 while doing @DWTS and dancing the night away,” she told fans on Instagram in September 2021.

While Elton John is permanently done with stadium tours in the US, his Farewell Yellow Brick Road Tour will continue with dates in Australia and Europe in 2023, according to Yahoo.