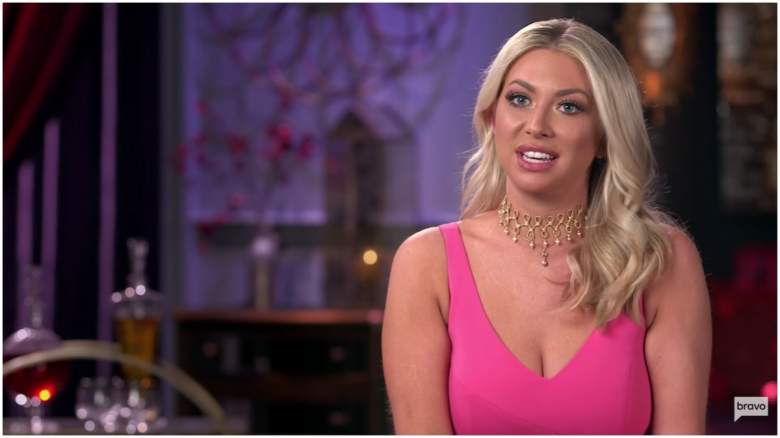 Former “Vanderpump Rules” star Stassi Schroeder was cited as an example in a lawsuit against NBCUniversal, Bravo and Andy Cohen, accusing the network of racial discrimination. Former Real Housewives of Atlanta star NeNe Leakes filed the lawsuit in federal court earlier this year and is currently fighting to avoid being heard in a behind-closed-doors arbitration hearing.

In the lawsuit, which can be read here, attorneys for Leakes cite Schroeder and her fired Vanderpump Rules co-star Kristin Doute as an example of how they say, “The racially-based offensive behavior and the failure of NBC and Bravo to rectify that wrongdoing and fixing it isn’t unique to the Housewives franchise.” Leakes’ attorneys wrote in the lawsuit, “They permeate other NBC and Bravo shows as well.”

The lawsuit states, “NBC, Bravo and/or True have a history of allowing racially and/or culturally insensitive and offensive conduct or statements to remain unresolved and uncorrected. This tolerance for this inappropriate behavior encourages them to continue. It is the opposite of providing a workplace or working conditions free from discriminatory and harassing behavior based on race, color, ethnicity or national origin. In fact, even Bravo has recently had to acknowledge that it has allowed racially insensitive behavior by those who work on its shows to go unresolved for too long, and that it should do better in the future.”

Schroeder and Doute were fired in June 2020 after it was revealed they had reported the show’s first black cast member, Faith Stowers, to the police and accused her of a crime the lawsuit says she did not commit. According to Variety, Schroeder and Doute both apologized to Stowers after the incident was exposed.

Leakes’ lawsuit focuses on RHOA and the other Real Housewives franchises, but also mentions other Bravo shows, including Vanderpump Rules. Her attorneys wrote: “The issue is also seen in ‘Vanderpump Rules.’ … In 2015 they tried to diversify by hiring Faith Stowers. But after leaving the show, Stowers publicly expressed that as the only black cast member, she felt she was treated differently than the other cast members. Among other things, she reported being subjected to inappropriate racial comments, like having her hair called a “diaper,” and even two white cast members, Stassi Schroeder and Kristen Doute, making a false report to police that Stowers had committed a crime .”

The lawsuit states: “Initially, Bravo did nothing – it did not publicly condemn Schroeder’s or Doute’s treatment of Ms. Stowers, who was effectively ousted from the show. It was not until much later, around June 2020, that Bravo reportedly terminated Schroeder and Doute’s contracts.”

Leakes’ attorneys write in the lawsuit that the aftermath of Schröder’s and Doute’s firings is another example of problems at Bravo. “Even when Bravo purports to be doing the right thing by taking action against employees who have engaged in racially inappropriate behavior, it does not deny and resent the underlying racially inappropriate behavior and culture in the long run.”

The lawsuit quotes Lisa Vanderpump, speaking on her podcast, saying, “It wasn’t right at all what they did, but do I think they’re racist? 1,000 percent not. … Do I think it was a racist action? Not at all. I just think it was horrible timing and stupid and ignorant.

Leakes’ attorneys also cite Cohen’s comments after the shooting: “Andy Cohen similarly indicated he had concerns about the shooting and told the New York Times that they were ‘decisions for the moment.’ The ‘moment’ of these layoffs happened to coincide with the explosion of the ‘Black Lives Matter’ movement across America in the spring and summer of 2020.”

According to The Daily Beast, Schroeder wrote about her experience of being fired in her recent book, Off With My Head: The Definite Basic Bitch Handbook to Surviving Rock Bottom, and frequently referred to “cancelled.”

Kyndall Cunningham of The Daily Beast wrote of the book: “The best credit I can give Off With My Head is when Schroeder highlights how her behavior was allowed to thrive on a very white show like Vanderpump Rules – and by extension her white friends group – received a lot of censure.” or rejection. As much as Bravo likes to reduce its racial issues to individuals, the network has long created environments where this behavior is not only acceptable, but desired. Schroeder intentionally does not sketch this fact. It is revealed all the more through all their telling and lamenting about the scandal.”

According to Cunningham, Schroeder wrote in the book that she learned about her “unconscious bias,” saying, “While Kristen and I didn’t feel the situation was about race, it was about Faith, and that’s why it was.” so about race. … I was wrong. I just need people to understand that it wasn’t about their race. … I’m not saying I deserve sympathy or pity. Again, I know I’m not at fault here.”