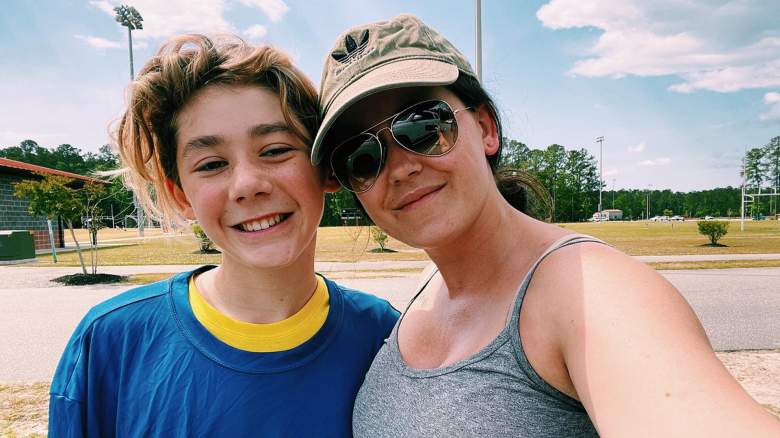 “Teen Mom 2” alum Jenelle Evans went to the river in North Carolina to spend some time with her kids — 5-year-old Ensley and 12-year-old Jace. Fans were quick to note that their middle son – 7-year-old Kaiser – was missing from the photo, but Evans said her son is spending the summer with his father, Nathan Griffith.

“Good morning. Well, today will be a boat day and I thought I’d take you with me. Let’s go!” Evans said at the beginning of her TikTok video.

Maryssa Eason, Evans’ 13-year-old stepdaughter, made a brief appearance in the video. Evans filmed the back of her head on the boat as she showed Jace how to use the kneeboard.

Evans revealed why she didn’t include Maryssa in the clip.

“Not hate at all, but doesn’t Maryssa like being in front of the camera?” asked one person on TikTok Evans.

“No she doesn’t lol but she watched Jace in the video,” Evans replied.

The Teen Mom star confirmed there were alligators in the water but said they were “afraid of humans.”

It’s not the first time Evans has taken to social media about taking her kids to the river, but Reddit users have been concerned about the color of the water and the creatures that lurk in it.

“I’m from NC and no, I wouldn’t swim in coastal rivers. Too many alligators and snakes, especially in swampy areas,” one person wrote.

Some people didn’t understand why the family chose to swim in the river when they could go to the beach or use their pool.

“I could understand swimming in that water when it’s hot in the summer… but they have a pool in their backyard. Although after seeing some pics of their pool the river might be cleaner lol,” they snorted.

“I can’t get past the brown water. No,” agreed another social media user.

Evans has documented her dental journey on TikTok and mentioned how Randy Houska — a dentist and Chelsea Houska’s father — appears to have an issue with her husband, David Eason.

She posted a tweet that Houska wrote almost four years ago. “Jaws ‘realign’ after being out of alignment,” he tweeted in October 2018, according to Us Weekly.

Evans claimed Houska was insinuated that her jaw needed “realigning” because Eason injured her.

“So Mr. Randy tried to imply that my husband hurt me when it wasn’t true,” Evans said via TikTok. “People believed Randy because he’s a dentist. Articles have been written all over the internet about Randy’s comments.”

Houska’s comments came after Evans’ 911 call in October 2018, during which she claimed Eason “pinned” her to the ground. She was afraid that he would break her collarbone.

Evans never pressed charges against her husband and has since denied that he physically harmed or injured her.

Eason was fired from MTV in 2018 after posting homophobic messages on Twitter. Evans was fired from “Teen Mom” ​​the following year after Eason shot and killed her French bulldog, Nugget. Eason claimed the dog repeatedly pinched her daughter Ensley.

Eason was not charged with fatally shooting Nugget.