PHOTOS: A look back at five Teen Mom proposals 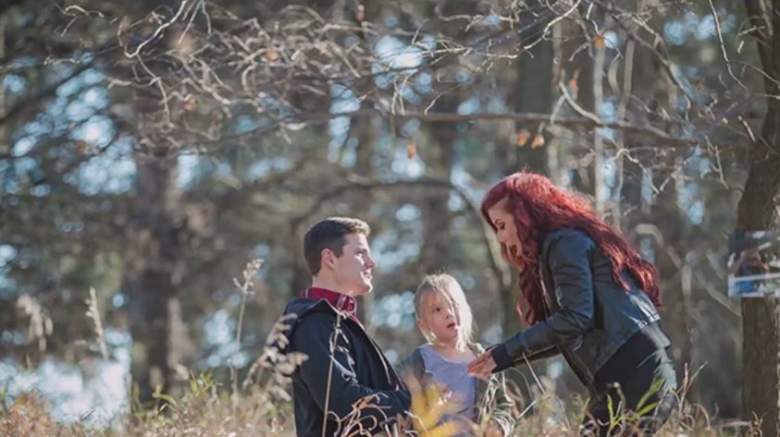 Teen Mom: Next Chapter star Leah Messer caught fans’ attention last month when she revealed she was engaged to boyfriend Jaylan Mobley. The West Virginia native shared photos of the romantic proposal on Instagram along with the caption, “Two souls one heart ❤️ It’s official!! 💍”

In honor of Leah’s recent engagement, here’s a look back at five Teen Mom proposals.

Chelsea Houska and Cole DeBoer have been together for almost a decade. According to Us Weekly, the two met at a gas station in South Dakota in 2014.

“He was on the other pump,” Chelsea told the outlet in 2014. “I looked and he stared at me. We didn’t even talk. We just kept looking at each other because we’re both shy. And then we passed each other as we walked because we lived the same way.”

The MTV star told the publication that after they first met, she went home and told a friend, “I just saw the guy I’m going to marry at the gas station.” Cole took to social media a few days later to Chelsea and the two began seeing each other, Us Weekly reported.

According to Us Weekly, Cole got down on one knee in November 2015. Chelsea kept the engagement photos a secret for over a year. In April 2016, she shared a few snaps from that special day on Instagram.

“I’m so happy @jakephotographysf was able to capture this incredible moment in November 😍 [I] I am so blessed with such an incredible man [Cole DeBoer]💍,” she wrote in the caption of the post.

After four years of dating, Maci Bookout got engaged to longtime boyfriend Taylor McKinney in January 2016.

The “Teen Mom” ​​star shared a photo of the special day on Instagram.

“Well y’all, my best friend asked me to marry him! I’m a happy woman, love you T,” she wrote in the caption.

According to Us Weekly, the two began dating in 2012, shortly after Maci’s split from Kyle King.

The “Teen Mom” ​​star shared a TikTok that showed Sean getting on one knee in front of her friends and family on September 1. The couple’s four-year-old daughter, Kloie, was also present at the proposal.

“Our happy ending has only just begun,” Jade wrote in the caption. “So glad we did [can finally] Share this!” According to Us Weekly, the couple got engaged in July and kept it a secret for two months.

Cheyenne shared photos of the proposal on Instagram. One photo showed Zach on one knee and Cheyenne looking at the ring box with a surprised look on her face.

“Speechless… We said yessss,” she wrote in the caption. “Today was perfect! I can’t put it into words yet but this is a moment I will cherish forever 🤍 thank you [Zach]. I love youuuuu!!”

Catelynn and Tyler’s engagement story is a little different. According to People Magazine, Tyler first asked Catelynn to marry him in January 2010. The proposal was introduced in Season 1 of Teen Mom.

However, the proposal did not last. According to People, Tyler called off the engagement during an episode of “Couples Therapy” in 2013.

“I feel like once we’re married I’m going to be stuck in this rut ​​forever,” he told one of the therapists, People reported. “The more I think about it, the more it demotivates me. She is not motivated to do things herself. She is not independent.”

Tyler must have changed his mind about the marriage because, according to Us Weekly, the couple got engaged a second time months later.