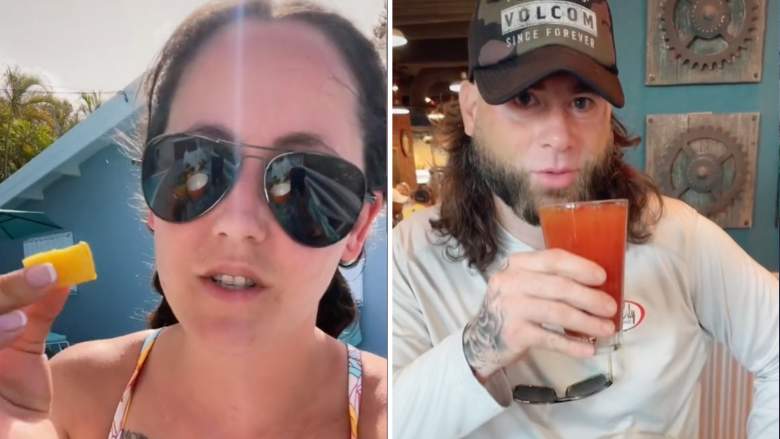 Teen Mom graduate Jenelle Evans was criticized by some social media users for posting a bikini during her St. Thomas vacation with husband David Eason.

“Get some Vitamin Sea 🌊✨,” Evans captioned the pics, showing off her rear end in a lime green swimsuit.

The star used one of the photos to promote her OnlyFans account, where she charges $20 a month for a subscription.

“You’d think she’d save that for her OV, or is she done with that now? Not even two whole months,” they said.

A number of people said they weren’t impressed with Evans’ pose, and others were concerned that the images would affect Evans’ three children.

“I don’t care how sex-positive you are, it will never be trashy to slip pictures like this in between your kids’,” they wrote.

There were some people who defended the former MTV reality star.

When a TikTok follower asked about Evans’ three children – 12-year-old Jace, 7-year-old Kaiser and 5-year-old Ensley – the 30-year-old influencer said she would be taking them on vacation in the future.

“Your turn is next and already planned 😏😂,” she wrote.

The couple opted for an Airbnb over a resort and rented a car, which was an experience since drivers use the left-hand side of the road in St. Thomas.

“David is doing really well 😂 but our muscle memory has thrown us off at times,” Evans revealed.

Evans and Eason have been away from their North Carolina home for at least five days, she told her fans on TikTok.

Evans said she doesn’t have to worry about her vaccination status when she travels. “You don’t need the vaccine or any test. St. Thomas is owned by the US. No more masks at airports either!” She told a fan.

The pair pretended to capture footage in a TikTok video of them sneezing at the airport and then tipping down liquor bottles at the final destination.

“Yes the bottles are sealed 😂 I can’t take any more pictures 😁,” she wrote. “David doesn’t drink liquor either 😂.”

The 30-year-old said she couldn’t drink because she had “stomach problems”.

Evans shared a tip with some of her TikTok followers, advising them to go to local markets when they visit St. Thomas.

She was surprised to see some of the fruits they had, like “real mangoes” and avocados.

Evans has been ridiculed by some critics for the “spicy content” she creates for OnlyFans, but the “Teen Mom” ​​star said there was “no shame” in her game.

“I’m a good mom first,” she wrote on Instagram and TikTok. “What I do second is none of your business.”

Evans’ proclamation came after she posted a bikini pic and captioned it “MomBod.”