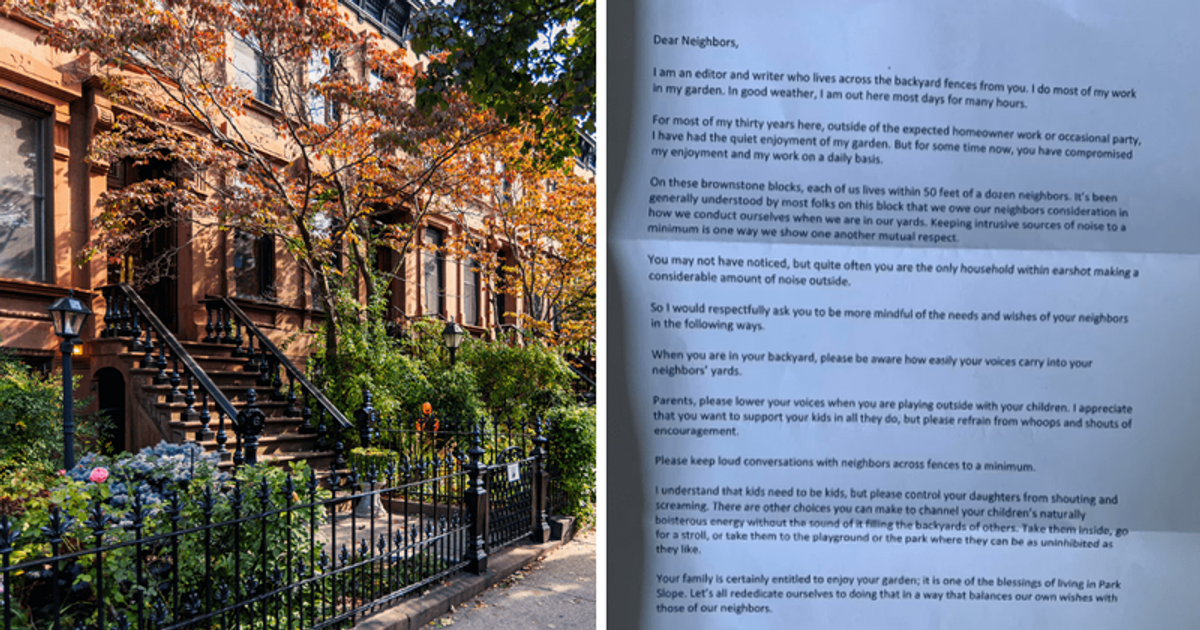 The mother of the “loud” children posted the letter on the Park Slope Moms Facebook page, announcing the ages of her daughters, namely two and four

NEW YORK CITY, NEW YORK: A person living in the Park Slope neighborhood of New York City reportedly sent a letter to their neighbor complaining about their “screaming and screaming” little daughters. The letter, shared on the Park Slope Moms’ private Facebook page, accused the family of endangering the anonymous individual’s “fun and work.”

The resident began the letter by saying, “Dear neighbors, I am an editor and writer who lives across the street from you. I do most of the work in my garden. I’m out here for many hours most days when the weather is good. For most of my thirty years here, outside of the expected housekeeping work or the occasional party, I’ve enjoyed my garden in peace. But for some time now you have been endangering my enjoyment and my daily work.”

The person continued: “On these brownstone blocks, each of us lives within 50 feet of a dozen neighbors. Most people on this block have a general understanding that we owe our neighbors respect for how we behave when we are in our yards. Keeping intrusive sources of noise to a minimum is one way we show each other respect,” before adding, “You may not have noticed, but quite often you’re the only household within earshot making a significant amount of noise outside .”

Park Slope has been said to be one of the most affluent neighborhoods in New York City, where the median household income is estimated at $129,570 for people who rent and $236,720 for homeowners. “Park Slope is consistently cited as one of the safest places in New York City to raise children,” according to a Daily Mail report.

In the letter, the anonymous sender is also said to have made some suggestions such as: “When you are in your garden, please be aware of how easily your voices are transmitted into your neighbors’ yards”, “Parents, please lower your voice, when your children play outside. I appreciate that you want to support your children in whatever they do, but please refrain from shouting and shouting of encouragement” and “Please keep loud conversations with neighbors over the fences to a minimum.”

In the closing parts of the letter, the person explained: “I understand that children have to be children, but please stop your daughters from screaming and screaming. There are other ways you can make to channel your children’s naturally boisterous energy without their noise filling other people’s backyards. Take them outside, go for a walk, take them to the playground or the park where they can be as uninhibited as they want.”

The note added: “Your family certainly has the right to enjoy your garden; it’s one of the blessings of living in Park Slope. Let us all rededicate ourselves by doing so in a way that balances our own desires with those of our neighbors. While noise is an unavoidable aspect of urban life, hopefully we can all agree that home is our personal urban sanctuary and we are all entitled to enjoy it in peace. Yours sincerely, your neighbors.”

The children’s mother posted the letter on social media, revealing the ages of her daughters, namely two and four. She also said: “They tell me to stop praising them out loud. What kind of lift did I need today,” before adding, “I need to yell so they stop hurting themselves or killing each other.”

Surprisingly, however, some people actually supported the letter sender rather than the family with children. One person commented: “It’s a good letter. Nothing wrong.” Another said, “The letter is very courteous and well written. Personally, I wouldn’t be offended to receive it and I would change my behavior and that of my children.” The third remarked, “It’s about being neighborly and to be polite. I tell my kids not to yell except in the park. Period.” “I agree with the neighbor. Screaming children make it unhappy for others around them to enjoy their outdoor space,” added the fourth.