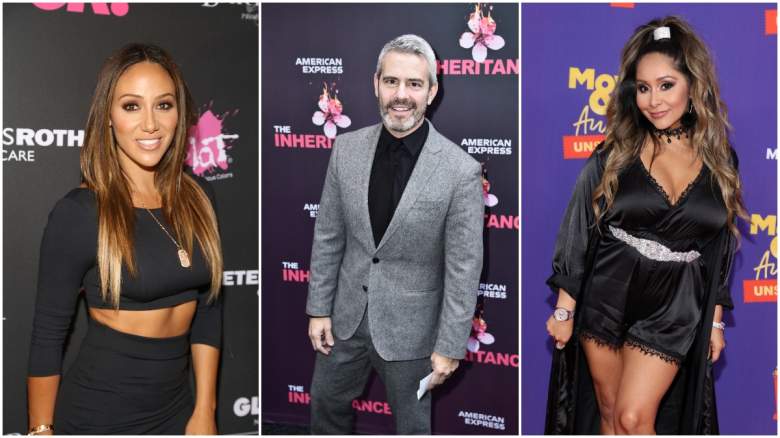 Out of luck for all Bravo fans hoping to one day see Nicole “Snooki” Polizzi in the Real Housewives franchise. During the July 12, 2022 episode of the Everything Iconic podcast, the Jersey Shore star shared her side of the story.

Podcast host Danny Pellegrino recently appeared on Real House of New Jersey star Melissa Gorga’s On Display podcast. During the January 6, 2022 episode, Gorga revealed that Andy Cohen is giving “such a hard no” to the possibility of Polizzi joining the show.

Pellegrino asked Polizzi about “beef,” which could be between her and the Watch What Happens Live host. She explained: “I always had a good time with him and we would go on his show and stuff like that. But ever since people raised me as a member of the housewives, he’s just been like, ‘Not a chance! Does not happen!'”

The “How far is tattoo far?” host admitted that Cohen’s reaction made her wonder if she had “wronged him somewhat.” But she reiterated a point she had previously made that she had no interest in being a real housewife.

“I don’t want to be in Housewives because that’s not my thing,” she added. “Like the drama and the legal shit. I’m not – I’m just here to drink wine and go home. So the show isn’t for me, but he’s so aggressive with it. He just says: ‘No! Never!’ I say, ‘All right, calm down.’”

If there’s anything she’d be willing to do on the show, it would be to “come here and there and do a cameo.”

However, Gorga thinks her friend would be great on the show. She just can’t convince her boss.

“Whenever I would go up to him and say ‘Hello! She’s married now, has three kids, lives around the block. I think she’s great for that, I think,'” she said on her podcast. “And he just looks at me like ‘No.’ He just doesn’t have it.”

The 42-year-old continued, “In his defense, they don’t usually like casting other people who have already been on another reality show. They prefer to find an authentic, you know, lady who lives in New Jersey and has a crazy life and a Bentley.”

Though any rift between Polizzi and Cohen seems to have extended beyond the Real Housewives franchise. “You know what she said to me when she was on my show?” Gorga told Pellegrino. “That he won’t even accept her for ‘Watch What Happens Live’ anymore. Well, I don’t know.”

The “hard no” wasn’t always the tune Cohen sings. He was asked about the possibility of Snooki becoming a housewife when he called Live with Kelly and Ryan in September 2020.

At the time, he told Kelly Ripa that The Real Housewives of New Jersey was “already in production for the next season of the show, so the answer is that it would happen in the foreseeable future.”

He continued, “And that’s a rumor that’s come up a few times over the years and it’s always something I’ve sort of dismissed. And I was like, you know what, it’s two different shows. I do not see it. But I do know that some of the women actually know her.”

He said Ripa’s suggestion that Snooki be proposed on the show “kind of legitimized it.” He added: “She’s 32, so in the age group. And now I’m starting to think it’s something we should be on the lookout for. Maybe a conversation about season 11 or 12.”

That timeline is officially off the table, with season 12 set to premiere on February 1, 2022.