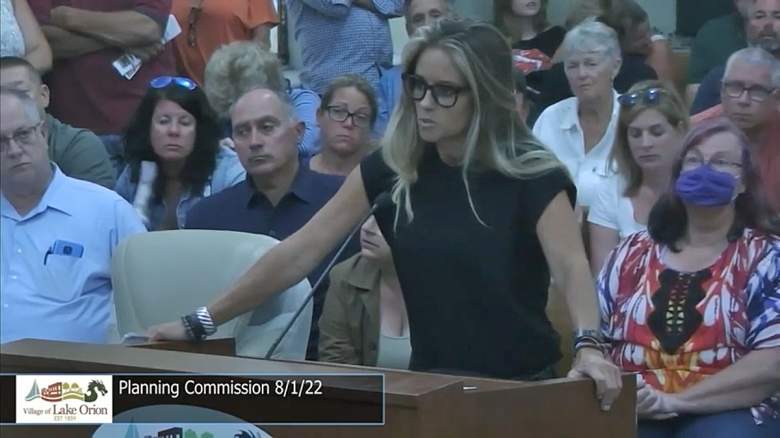 Nicole Curtis keeps turning up in unexpected places on her self-proclaimed summer adventures, Dora The Explorer, from Paris to New York and now to the small lakeside village where she filmed Rehab Addict Lake House Rescue, a series that Fans have been wondering since HGTV pulled it hours before its scheduled July 13 premiere.

When the home restoration expert learned a public hearing was scheduled to discuss a proposed housing development on the shores of Lake Orion, the small town where she grew up and owns several homes, she said she has one Canceled trip to New York City to abort to fly to Detroit – about 45 minutes north – to face the commission. Curtis is no stranger to controversy and says this will be her “loudest fight yet.”

Curtis worried many fans on July 13 when she posted a mirror selfie of an airport restroom to her Instagram feed and declared, “I’m done,” as she announced her new show chronicling her restoration of a century-old vacation home in Lake Orion, would not air as planned. Posting photos of herself in a hospital on her Instagram Stories, she wrote, “I’m a ‘make the best of it’ person but I reached my limit when… the stress of ‘doing everything’ broke my body .”

Three days later, the HGTV star announced that she was in Paris and said she fancied waking up to the view of the Eiffel Tower, so she booked a flight. Over several days, she posted multiple updates to her Instagram Stories, with photos and videos of solo bike rides, meals, and sights.

She didn’t address the HGTV show or her health until July 21, when she revealed in new Instagram Stories that she hadn’t finished the “Rehab Addict Lake House Rescue” show in time for its scheduled premiere on HGTV when she left country. She explained, “Due to physical (not mental) health issues, I wasn’t able to spend my usual 16 to 22 hours building in front of and off camera on a construction site… When that happened, we were almost done with the Lake House. The programs are in the final version on my laptop. When I’m up, you’ll see my house as a star @hgtv.”

On July 23, Curtis said she was ready to leave Paris, felt better, and had “found the light at the end of the tunnel.” A few days later, Curtis showed up in New York City and posted new photos to her Instagram Stories about another impromptu trip. But that trip was cut short when she got wind of the public hearing that was to be held at the Village of Lake Orion.

“I saw an announcement for a hearing in #lakeorion,” she wrote, with a mirror selfie posted to her Instagram stories. “Decided to end my Dora the Explorer journey early.”

Curtis wasn’t the only one concerned about development plans for her hometown, which has fewer than 3,000 residents. The council chamber was packed with residents on August 1, most of whom had turned up to protest the proposed four-story apartments. Planning Commission Chairman Jim Zsenyuk thanked the crowd for coming to their regular meeting, but said notifications that it was a formal public hearing were inadvertently released.

Residents were still allowed to voice their concerns about the economic and environmental impact of adding residential buildings along the marina, but the developers did not present their designs. Curtis stood on the podium twice, first reading a statement from Steve Cimini of Lake Orion, who is her ex-husband. The couple had a bitter custody battle over their son Ethan, who is now 24 but is reportedly now on amicable terms.

Curtis then spent several minutes echoing the concerns of previous speakers, calling the proposed buildings “absolutely ridiculous.” Many participants before her had expressed concern that adding more apartments along the marina would result in increased boat traffic on the already crowded lake. Curtis told the commission that rejecting the proposal “would protect the village from temporary residents.”

“You need sustainability in this village,” the 46-year-old told the commission. “You know, I’ve aged, my family members who built this town have aged and died. We need life owners. We need lifeguards in this town. You don’t get that with high-end rentals.”

At times, the longtime TV personality struggled to make clear points, jumping from topic to topic erratically. For example, she told council members, “Many of you here have been there forever. I’ve only been here 28 years if you really want to ask me the truth, but it’s closer to 46 now.”

Curtis also accused the commission of breaking the law by nullifying the previously announced public hearing. She said: “I would also like to argue that if you have a large gathering of people here opposed to it, it is totally illegal to announce something on an agenda and have it on your paperwork and then mysteriously disappear . I would call that a good card shuffling game.”

When Curtis took the podium a second time, she was asked more than once to show more respect to the council members. She read the commission’s notice of the public hearing directly from The Lake Orion Review and reiterated that it was wrong not to hold the public hearing as announced and told council members that they had better work to give villagers access to procure the proposed development plans.

“It’s on you as elected officials to make sure the city does its job to get this out properly,” she told them, adding that the formal hearing should be at a larger facility, “with air, that would be.” Great .”

Council-elect Michael Lamb spoke up at the time, asking Curtis to have more respect for the council’s efforts. Lamb said he has spent thousands of hours of his own time working for the council without any compensation, adding that the village staff is very small and is undergoing a role reversal due to the village head’s illness.

“These gentlemen … are all volunteers who spend many hours of their free time doing this for free,” he told Curtis. “So please be respectful to these gentlemen when you say what our responsibilities are.”

Curtis replied, “I don’t mean disrespect,” but reiterated her point, saying she volunteers for many things but doesn’t let a lack of compensation stop her from doing her job.

After the commission’s meeting, Curtis posted videos to her Instagram Stories in which she confronted a member of the development firm who hopes to build the new homes. She asked the man, who carried plaques with artistic renderings of the proposed site, “Were you prepared for a hearing tonight?”

“Yes, we were,” he replied. “If you show up for a meeting, always be prepared.” Captioning the video, Curtis wrote, “The village said at the last minute there was no public meeting. WTF is the developer here with all his props?”

On her Aug. 3 Instagram feed, Curtis posted a photo of herself on the podium. She wrote: “This is going to be my loudest fight yet as it should be. I have fought everywhere to preserve it and it seems appropriate to bring this experience home. Ironically, I’ve just finished editing the shows that highlight my love for this historic village.”

Then, on Aug. 4, the self-proclaimed conservationist posted some written thoughts to her Instagram Stories. “On the agenda today – wake up. I’m gathering all information for this fight in #lakeorion. So hold on tight – because I need your help.”

She also uploaded a photo of her lake house – said to be featured on her new show – and wrote: “I’ve been restoring a 1907 cottage here since 2014. I own four other homes here in #lakeorion – this fight is personal.” In smaller letters, she typed “@hgtv This September,” which could mean the Lake House Rescue series has been pushed back to premiere this fall.

Curtis then shared several videos to show why “this fight is my most personal yet,” including footage of a busy intersection where Curtis says she and her ex-husband first met, and images of historical ones Homes that the developers “torn down” would prevail. A formal public hearing on the matter is now scheduled for September 6th.