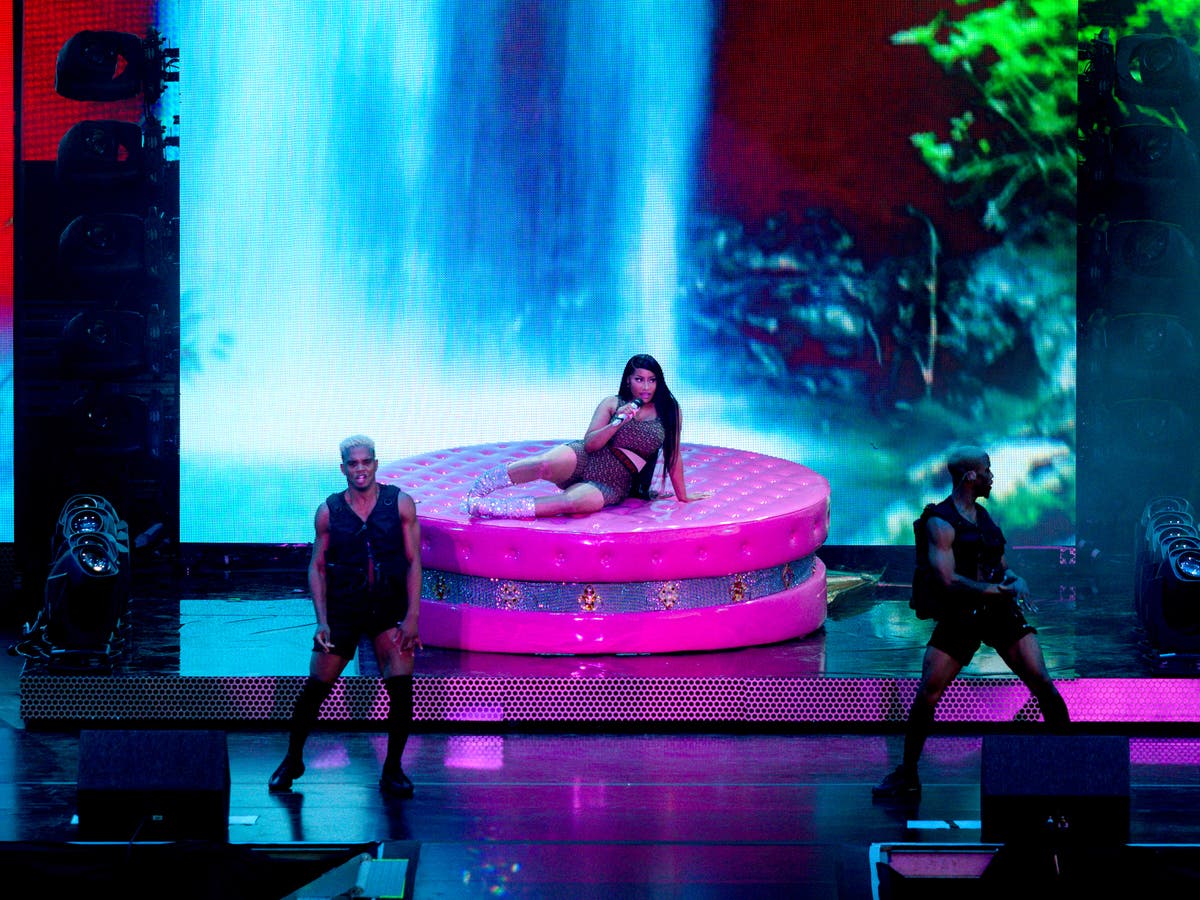 Nicki Minaj is late. Two jumbo screens on either side of the main stage carry this message to the large and growing crowd waiting for their final Wireless headliner. Some take this as a sign to leave; We’re on the third day of a festival that’s been in the 30s all weekend and it’s a Sunday after all. But most remain where they are, eager to see Minaj take the stage — even if it’s only for 45 minutes.

The choice of music on hold is questionable, as audiences regularly misinterpret the many pauses in Busta Rhymes’ “Break Ya Neck” as an indication of the rapper’s impending arrival. Not twice, but three times premature applause breaks out over Finsbury Park. When Minaj arrives, the clock is ticking against her and she wastes no time getting down to the hits.

No album released since 2018 queenMinard offers a set mostly comprised of hits dating back a decade. It’s a brilliant throwback to the festival and includes a medley of their best collaborations. Her status as the queen of guest verses remains firmly intact, despite the conspicuous absence of her much-loved verse on Kanye West’s 2010 track “Monster.” While tonight’s omission remains inexplicable, she told an audience in New Orleans last week that she was “monster’d out” and appeared to diss her co-worker, saying, “We don’t fuck with clowns.”

Instead, she seamlessly flirts between the lightning-fast rhymes of 2011’s “Dance (A$$)” to the cheekiness of her Beyoncé collaborations with 2014’s “Flawless” and “Feeling Myself.” “Where are my Caribbean people?” she asks before beginning Sean Kingston’s 2011 hit “Dutty Love.” More recent releases are doing just as well. People are licking 2017’s “Rake It Up,” which has found new life thanks to a viral TikTok trend. She brings out US rapper Bia for the 2020 remix of Whole Lotta Money, to the delight of audiences. The couple dances on a rotating circle of poles set up like a sexy carousel.

It’s hard to tell if this compilation of 30-second soundbites was always the plan, or an abridged version of the show that was canceled due to the late start. Either way, it’s a satisfying solution for an act that has too many standout tracks to fully present them all. It’s also one of the festival’s best sing-along shows, with almost everyone shouting out the lyrics to these songs of their youth. Standing in for Ariana Grande on Side to Side is a particularly euphoric moment.

Minaj takes a while to warm up to the crowd, and dancing is mostly kept to a minimum. A hip thrust here. A body roll there. “Anaconda” – Minaj’s 2014 cultural reset and ode to all the big butts out there – naturally calls for something a little more dramatic. The musician leans in and twerks into the camera, earning the loudest applause of the night. “Feeling Myself” is accompanied by a correspondingly hot grinding of a leather futon. At one point, Minaj effortlessly lifts a diamond-encrusted boot over her head as if to say she still got it. But it’s her facial gymnastics, a longtime signature of Minaj, that still wows. As she raps to 2010’s “Did It on ‘Em,” she points meanly at the camera, and the screens behind her show iterations of the star gone: full bangs, pink hair, snarls.

When Minaj starts to wrap things up with her star hit “Superbass,” it’s clear audiences got what they came for. And when she disappears, to the emotional highs of 2010’s “Moment 4 Life,” it’s in a cloud of jubilation. Their late start is as good as forgotten.