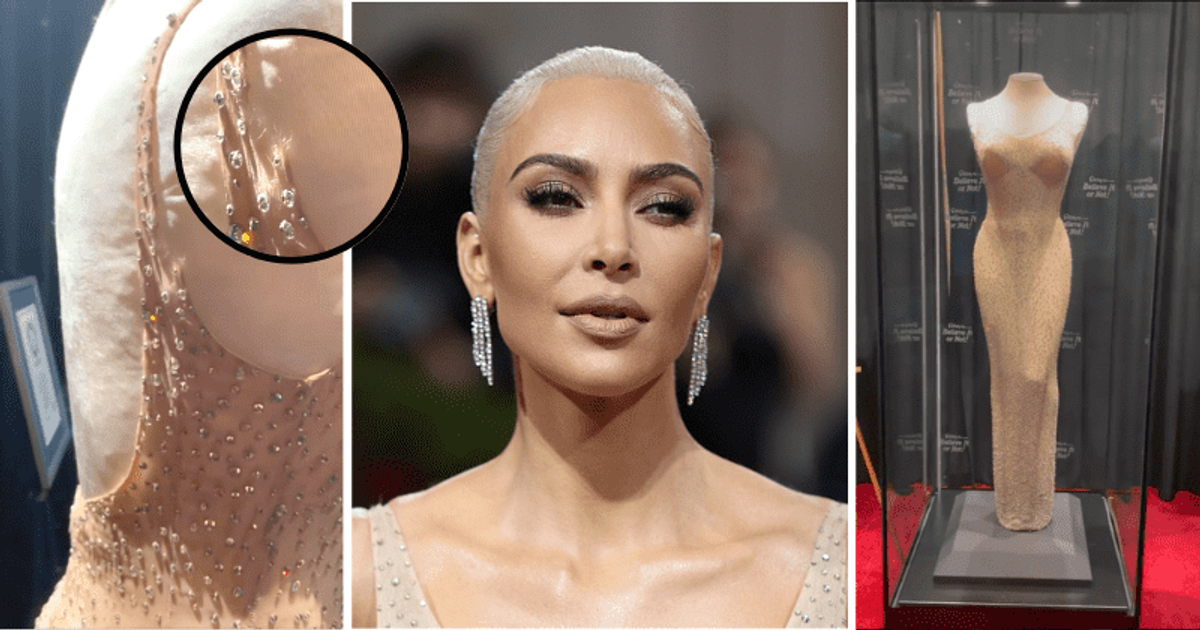 Instagram user Darrell Rooney, who recently posted Ripley’s Believe It Or Not! Hollywood Museum posted new videos to Instagram showing more damage to Marilyn Monroe’s famous Happy Birthday Mr. President dress. Kim Kardashian, who borrowed the garment for the Met Gala red carpet in 2022, is said to be to blame for the damage.

“Look at the damage done by KK. Irreversible. Marilyn Monroe’s 1961 dress now has several shreds,” commented Rooney, who posted a series of videos and images showing a close-up of the outfit on display. The damage done to Marilyn Monroe’s iconic outfit is clearly visible in the recently released videos. Rooney, an established animator, also referenced one of the videos in which Kim, 41, talks about the experience of donning the look for the night.

“‘Well, I knew if someone could best care for this dress and understand its meaning, it would be me, KK. Those words play out in the video as you watch the damage to MM’s dress,” Rooney wrote.

“Note the irreversible damage done to Marilyn’s dress by you, you know who,” he captioned another image, which shows a close-up of the zipper and stretched fabric. “The saddest thing about all of this to me is that this time MM was raped by a woman and not a man. Shame.”

Pictures of the dress showing signs of damage had surfaced earlier this week. Pop Crave tweeted comparison pictures of the ensemble, believed to have been taken before and after the Met Gala. Although she only wore the original briefly before morphing into a replica to take pictures on the red carpet, many blame Kim Kardashian for the museum piece’s current state.

Kim opened up about her admiration for the famous dress before heading to the ball. She told Vogue: “I have a lot of respect for the dress and its importance in American history. I would never want to sit in it or eat in it or risk damaging it, and I won’t wear the kind of body makeup that I normally do.”

After the Met Gala, Ripley’s issued a statement released by The Post regarding the controversial loan, claiming that Kim’s use of the delicate dress caused “no harm”. Ripley’s noted that while it “wasn’t an easy decision for Ripley’s, Kim Kardashian continues to show the utmost respect for this occasion and this historic garment.”

“From extensive research to guidelines like no body makeup, only wearing the dress for the brief red carpet appearance and absolutely no alterations, she’s become a steward — and has contributed to her story,” concluded the enterprise.