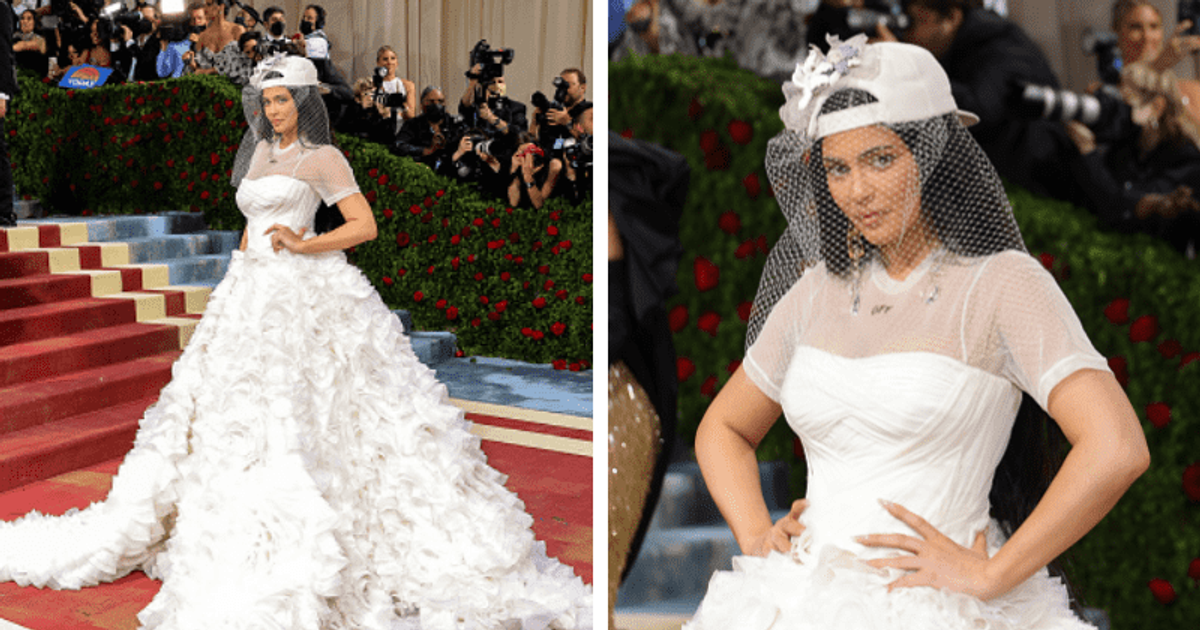 The 2022 Met Gala theme is “In America: An Anthology of Fashion” with a focus on Gilded Glamor and White Tie

Kylie Jenner left many people perplexed when she arrived at the star-studded Met Gala on Monday night, May 2nd. Kylie, 24, burst into some extraordinary bridal energy on the Met Gala red carpet just three months after welcoming a newborn son with Travis Scott, 30. Before stepping out, the Kylie Cosmetics mogul uploaded an adorable behind-the-scenes video in which her 4-year-old daughter Stormi ruffled her billowing white ball gown skirt.

Kylie flaunted the whole look on the red carpet, showing off her edgy wedding style with the tight corset bodice that had sheer paneling paired with a huge skirt. Instead of a traditional veil, she opted for an inverted white baseball cap with embellishments. A birdcage bridal veil fell in front of the star’s face as part of the cap.

Kylie’s long dark hair peeked out from under a white veiled baseball cap, which she wore back for a sportier style. Floral appliqués adorned the hat, which slightly hid Kylie’s striking face. The unusual dress featured a long, floor-length skirt and a t-shirt-inspired mesh bodice on the mother-of-two. A pleated white spaghetti strap bodice with a sweetheart neckline was layered under the mesh.

The word “OFF” was written on the front of the dress, suggesting it was designed by the late Virgil Abloh’s Off-White label. Kylie complemented the attire with a set of glittery chandelier earrings that sat on her shoulders and a pair of sheer heels that peeked out from under her dress.

Kylie made sure to reconnect with her older sister, Khloe Kardashian, after walking the red carpet and climbing the museum stairs on her own. After allowing the paparazzi to get a close look at Kylie’s hair and makeup, the pair posed for a photo behind a curtain.

The 2022 Met Gala theme is “In America: An Anthology of Fashion” with a focus on Gilded Glamor and White Tie. According to Vogue, the event, which took place between 1870 and 1890, invited attendees to “embody the greatness—and perhaps the polarity—of Gilded Age New York.”

The official exhibit for this year’s In America: An Anthology of Fashion will be held in the museum’s historical rooms, which will focus on eras, serve as a follow-up to last year’s A Lexicon of Fashion, and pay tribute to American history .

Balmain in 2017, Versace in 2017, Alexander Wang in 2018 (three months after Stormi was born), and Versace in 2019 are among Kylie’s previous Met Gala looks. She skipped the 2021 Met Gala, which had been pushed back to September 2021 due to the coronavirus outbreak, just days after she began flaunting her expanding baby bump in New York City during her second pregnancy.

Many admirers took to Twitter to express their feelings about Kylie’s Met Gala 2022 attire. One fan wrote, “I want to love this so bad but she just looks uncomfortable and it’s just not KYLIE JENNER.”

One fan wrote, “When Kanye left, he took fashion with him,” while the other wrote, “…a t-shirt wedding dress with a back-leaning baseball cap veil is stock.” That would have been perfect for 2019 Damn, what’s that doing at the 2022 gilded Glamor Met Gala?

Another fan wrote, “This dress looks like the one Cece and Winston drunk buy while looking for a wedding dress.”

Trying to piece together Kylie’s outfit choices, one fan wrote, “Anyone spoofing it is probably paying homage to Virgil.”