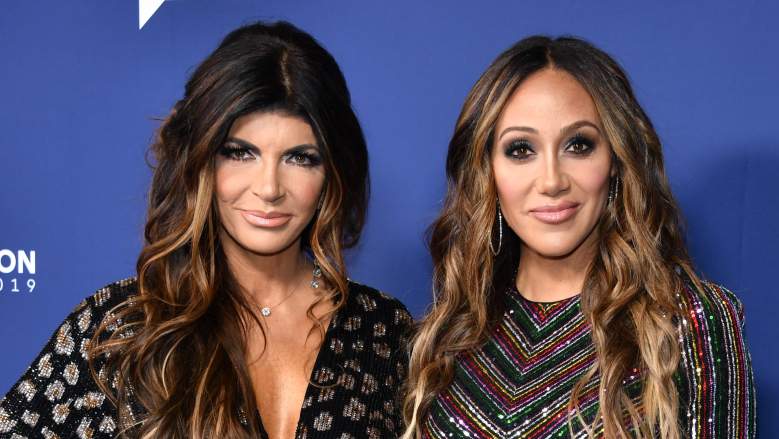 Real Housewives of New Jersey star Melissa Gorga opened up about her castmate and sister-in-law, Teresa Giudice, on her podcast, Melissa Gorga on Display.

While taping the April 22, 2022 podcast episode with her guests Amanda Batula and Summer House star Kyle Cooke, Melissa revealed that “RHONJ” gave her and Giudice a stronger bond. She explained that she sees the show’s production team as “therapists.”

“I’ve said year after year that my sister-in-law and I went through tons of nonsense, right, but when I wasn’t on that reality show — when we weren’t on that show together, those producers were our therapists for 12 years. When we literally don’t want to look at each other, they both sit us down and act like you guys need to talk and you’re going to have lunch,” Melissa said.

The mother-of-three also noted that she felt she and Giudice would hardly communicate if they weren’t co-stars.

“I honestly don’t think there would be a great relationship at all if we weren’t on the show, if I’m being completely honest. I think it would be very quiet. I think it would be very minimal, I think it would be ‘Happy Birthday, Merry Christmas,'” the 43-year-old revealed. “I think this show got us on vacations together, got us to do team building together, worked at family gatherings, I’ve always said that and I tell Andy Cohen that all the time, it was like therapy for me us and it’s forced us to repair our relationship. When people say, “Oh, you jumped onto reality TV, it’s awful, you’re with your family, it’s just ruining you,” it’s like, “No, you have no idea if we’re not on this show.” were, we would probably never speak.”

during one Appearance in April 2022 on “Watch What Happens Live with Andy Cohen”, Melissa shared that she hasn’t communicated with her sister-in-law since filming the season 12 reunion special. She also revealed that she believed Giudice’s nemesis Margaret Josephs had shown her more loyalty.

In an April 2022 interview with Access Hollywood’s Housewives Nightcap RHONJ star Jackie Goldschneider opened up about the Season 12 reunion.

“It was my fourth reunion and it was by far the most aggressive, the most combative, it was just very — it was the longest, there were just so many issues,” said the mother-of-four.

She then hinted at why Melissa’s husband, Joe Gorga, left the set while he was filming the reunion special. She shared that Giudice, Melissa, and Joe had “old-school family issues.” The former attorney also noted that Giudice had decided not to have her sister-in-law as one of her bridesmaids at their upcoming wedding.

“It’s no secret now that Teresa won’t include Melissa in her wedding. They had a lot of issues with it, a lot of family issues, old-school family issues from the days before I joined, and I think there was a lot of tension and a boiling point,” Goldschneider said.