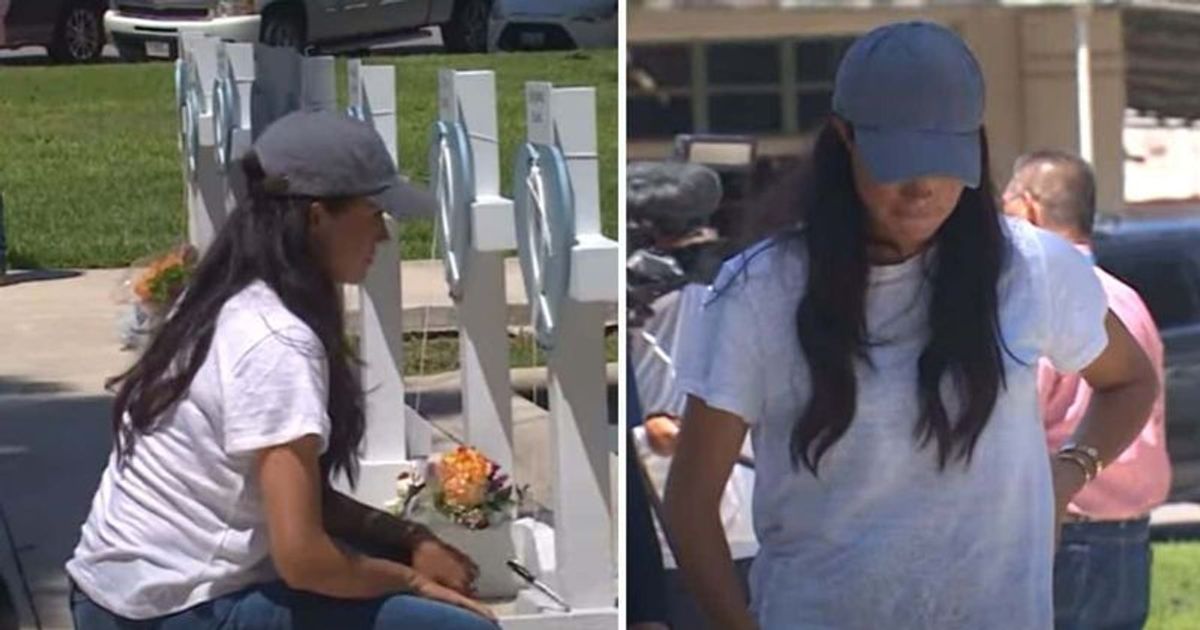 Some social media users began claiming that she was accompanied by camera crews filming content for her deal with Netflix, a claim that hasn’t been confirmed

Meghan Markle visited Texas on Thursday May 26 to commemorate the victims of the Uvalde massacre. Markle was seen laying a bouquet of white roses at a memorial to the victims murdered by Salvador Ramos at Robb Elementary School. The 40-year-old wore jeans, a T-shirt and a baseball cap.

Teenage gunman Salvador Ramos opened fire on a Texas elementary school on Tuesday, May 24, killing over a dozen children and more than one adult. The death toll is currently 21, with at least 19 children killed at Robb Elementary School. Other victims are two teachers at the school.

Markle reportedly stared at the crosses to honor the two teachers and 19 children who were slaughtered by the suspect, who was also shot dead by an elite tactical unit’s off-duty hero Customs and Border Protection agent. The agent killed Ramos before his evil rampage could claim any more lives. Meghan placed the white roses, tied together with purple ribbon, on a cross for one of the victims, Uziyah Garcia, 10. On his memorial someone had written: “You will be missed.”

Markle was accompanied by a bodyguard who appeared to be Alberto Alvarez. She stopped at a community center in Uvalde where a blood drive was taking place. She toured the facility and donated food, the Daily Mail reported. Markle did not address the press about her visit to Uvalde.

Meanwhile, Markle’s father, Thomas Markle, was reportedly hospitalized this week after suffering a massive stroke that left him speechless. He is being treated medically in an American hospital.

After Markle’s visit to Uvalde, some social media users began claiming that she was accompanied by camera crews filming content for her deal with Netflix. However, reports have claimed that it is unclear if this is true. Netflix has not yet commented on the matter, and Latestpagenews has not been able to independently verify the allegation is true. Despite Markle’s visit, which some described as generous and thoughtful, some social media users slammed her over the alleged “Netflix” accusation.

“These parents mourn the loss of their children in the most tragic of circumstances. The last thing they need is a celebrity with their @netflix crew in tow traveling 1,500 meters for some self-promotion,” one user wrote on Twitter. “So Meghan Markle performed in Uvalde TX today… is it real or a Netflix cameo for the content?!?!” wrote another. One user said: “I’m not even a Meghan Markle hater, but visiting Uvalde with your Netflix cameraman in tow is beyond cheesy and feels like she’s capitalizing on a city’s unimaginable grief for good PR.” “

“Didn’t even have the decency to take off her baseball cap. Using a tragedy like this for self promotion and Netflix is ​​absolutely disgusting when she should be with her dad,” wrote one user, while another said, “Controversial using a horrific tragedy for your own PR and Netflix Documentation. Also not eco-friendly to fly to Texas just for a photo op.”