Matthew McConaughey’s fans are defending his use of SYMBOLIC green Converse, but trolls are fueling controversy 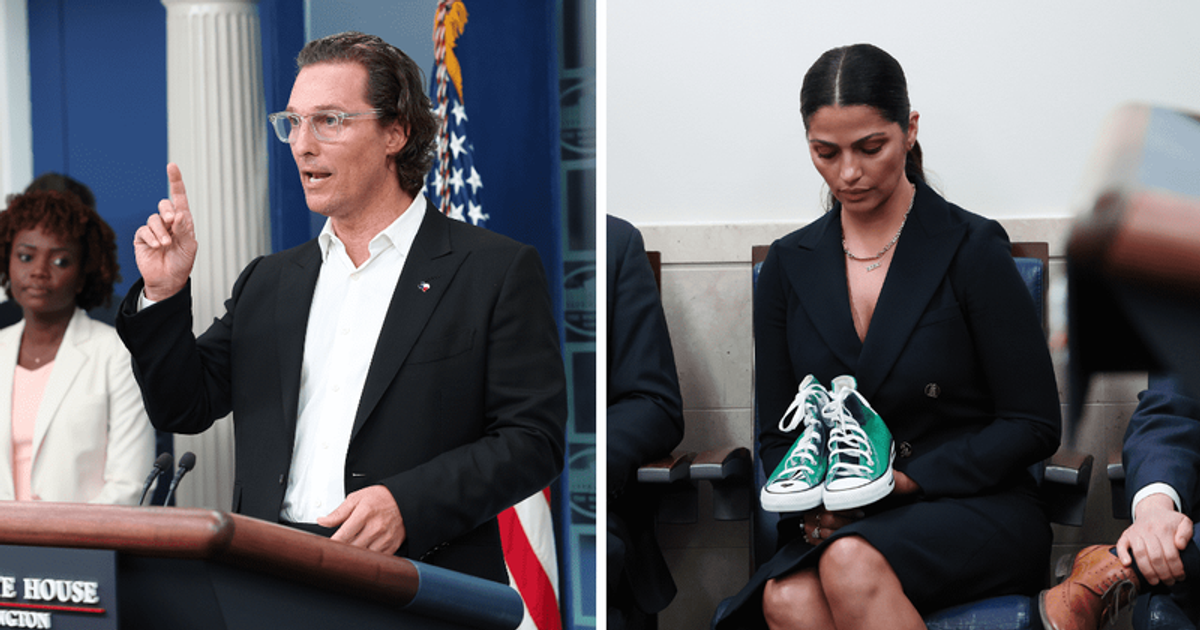 McConaughey was slammed for implying the green Converse displayed by his wife belonged to a Uvalde shooting victim, but defense attorneys said the shoes were “symbolic”.

Matthew McConaughey’s fans have jumped to his defense after he and his wife were called out for allegedly “spreading lies” while speaking at the White House press conference. The 52-year-old met with President Joe Biden last Tuesday, June 7, before delivering a very powerful and emotional speech following the mass shooting at Uvalde School that killed 19 students and two teachers.

The actor, who was born in the tragedy-stricken Texas town, was accompanied to the event by his wife Camila Alves after she reportedly spent days with the families of the victims. During his speech, McConaughey mentioned the children who lost their lives on May 24th. One of those schoolgirls was Maite Rodriguez, 9, who was killed by teenage gunman Salvador Ramos.

Uvalde School Massacre: This Is Why Matthew McConaughey Bombarded Messages To Get HOME!

Matthew McConaughey has hit out after calling the school massacre in his hometown an “epidemic we can control”.

Of the child who died in the shooting, the ‘Interstellar’ star said: “Maite wore green high-top Converse with a heart she hand-drawn on her right toe because they represented her love for the outdoors. Camila has these shoes. Can you show those shoes please?” while pointing at Alves who was sitting there with a pair of green Converse shoes.

While many applauded the ‘The Gentlemen’ star for his heartfelt speech, some mocked him and his model wife for apparently claiming the shoes belonged to Maite. One of those critics was @ZadeSmith6, who shared photos while implying that Maite’s actual shoes weren’t carried to the White House by Alves. She took her own shoes to show them there. The user wrote, “I hate liars…… @McConaughey.”

The same user also shared a clip of McConaughey’s speech via Twitter: “Sums it up well…” Another reviewer said, “And anyway, how gross is it to feign crying and outrage over a pair of… not-the-kid shoes?” I can’t handle these people.” “He lied to the world today. Case closed,” added the third.

But some of the Oscar winner’s admirers explained it with a tweet: “They’re not saying these are the same shoes she wore, it was the kind she wore. They’re only showing us this out of respect for the family. My god this is not something to be screwed about.” The second fan wrote: “Of course. He said they were green Converse with a heart, not exactly her shoes, which is probably proof. Those attempting to foment controversy over the shoes plead guilty to engaging in a cruel, shameful, intentional diversion. Good people shouldn’t fall for it. It was THAT GUN.”

A tweet supporting McConaughey read: “I’m pretty sure the real shoes are in an evidence locker. I assumed they were symbolic. I think Matthew’s motives were pure. I don’t think yours are.” And when a troll tried to question the True Detective actor, saying, “Again. Matthew, the actor, said the shoes she was holding were the girls’ shoes she was wearing when she was shot. Watch out,” one fan of his fired back, “Oh and by the way he DID NOT say those were the exact shoes he was talking about, the shoes she wore everyday, you can see those shoes are brand new! WOW, WATCH OUT OR DO YOU HAVE TO REMOVE EVERYTHING? 🤔🤦‍♀️”

I’ll show you Wednesday at Wimbledon where Raducanu, Djokovic and Murray are back at the top of the bill

I’ll show you Wednesday at Wimbledon where Raducanu, Djokovic and Murray are back at the top of the bill