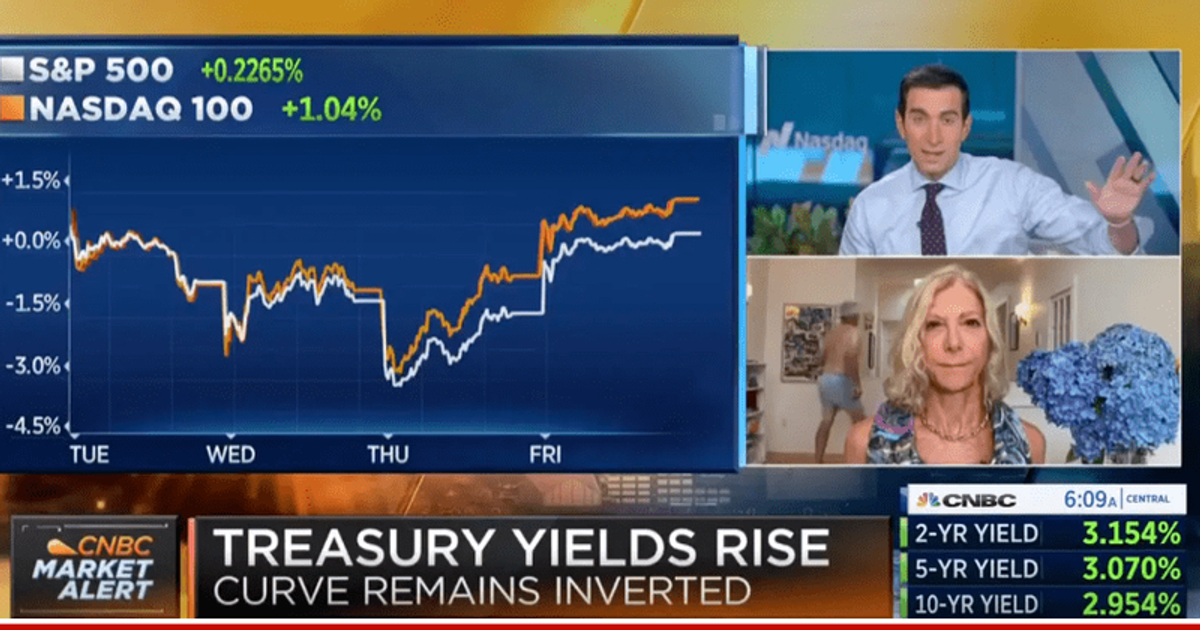 Karen Firestone, 66, a frequent guest on the business network’s Wall Street show, had a bad TV moment when her interview was interrupted by her dogs barking and then the funny sight of a man walking briskly in the background. was interrupted while wearing a pair of blue boxer shorts.

With the words “Today, in my opinion, one must strive upwards”, the financial analyst tried to put a positive twist on the bleak future of the market. She began commenting on Citigroup’s earnings reports and the Fed’s decision not to hike rates as much when a chorus of howling dogs came along and drowned them out.

According to her web bio, Firestone claims to have two Springer Spaniels known for their short tempers. Host, Andrew Ross Sorkin, joked, “It’s the dog days of summer.” Co-host Joe Kernen punted on the stock index’s “Dogs of the Dow.”

She mumbled an apology while Sorkin insisted on urging her to predict how the market would behave in the coming months.

Regarding her dog, Firestone noted, “I think she’s excited. She keeps an eye on Squawk Box and is quite excited about the market.”

However, as Firestone responded, raising key points regarding the impact of inflation and a recovery from Covid on the market, a grey-haired man sauntered to the back of Firestone’s home in Brookline, Massachusetts while wearing only his skivvies.

When the Harvard-educated entrepreneur saw it, she kept it to herself, and Sorkin tried to keep his composure. The host predicted next September, “Dog Days would get a little more exciting, but not in a good way.”

The identity of the man in his underwear is not yet known.

When it comes to live broadcasts, glitches are common, although Firestone and the man who showed off his underwear on national television are likely not happy about the incident. In just one case from 2020, NBC reporter Ken Dilanian rose to fame after accidentally deploying the F-bomb on live television due to a technical issue. Dilanian immediately expressed regret for the mistake.