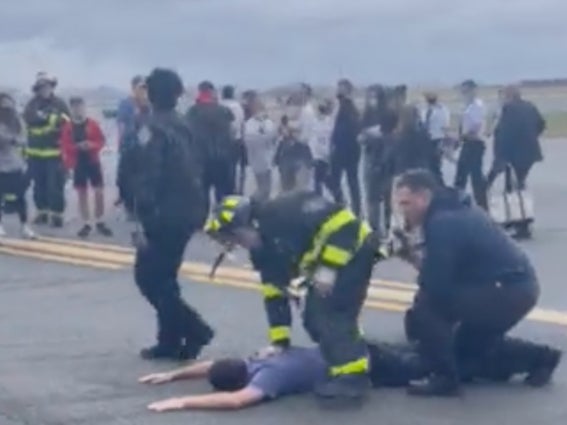 A plane made an emergency landing at New York’s LaGuardia Airport after a woman mistook a man’s vintage camera for an explosive.

The incident came Saturday after a mother traveling with her husband and children noticed that the man in question (whose identity was not disclosed) was viewing pictures and videos from relic cameras, according to sources speaking to New York Daily News.

At that point, she became scared when she thought he was looking for ways to make a bomb.

After he pulled out an antique camera himself, she mistook it for an explosive device and quickly took action to alert the airline’s staff.

The pilot informed the traffic control that he had to clear the runway for the emergency landing due to the behavior of a passenger.

Then the plane landed away from the airport building and the passengers were evacuated with inflatable slides.

On the ground, the alleged bomber had to lie face down on the runway, his bags were confiscated and searched.

The search revealed that the man had a skateboard and other vintage cameras in his possession.

Someone on the plane used social media to talk about the moment and wrote, “So the end of our flight got interesting.”

Port Authority police and federal agents held the man for several hours before he was given the go-ahead for his day – although he was believed to be agitated.

“The JTTF [Joint Terrorism Task Force], The FBI and Port Authority Police have determined the passenger is not a criminal and he has been released, “Port Authority spokesman Tom Topousis said in a statement.

The 78 passengers on board were evacuated from the aircraft seamlessly and unharmed along with four crew members.