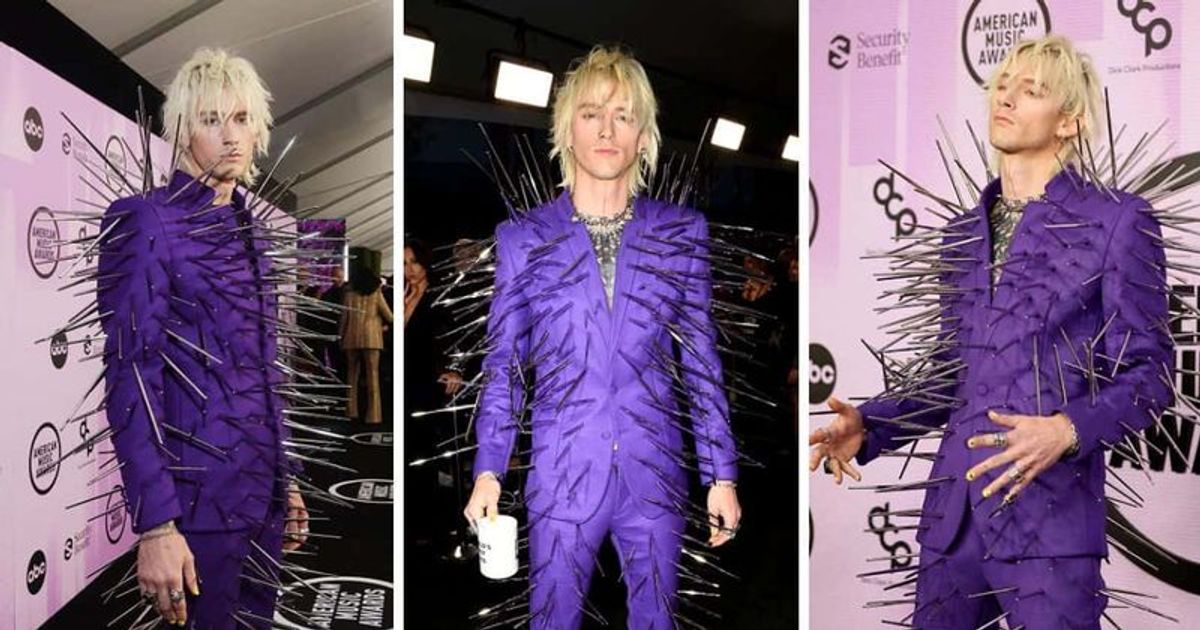 “Okay, but how did he sit down? I want to see him get out of the limousine at the same time,” one user joked of Machine Gun Kelly’s outfit

CLEVELAND, OHIO: Machine Gun Kelly walked the black carpet at the 2022 AMAs on Sunday, November 20 wearing a dangerous-looking purple Dolce & Gabbana suit completely covered in metal spikes. It wasn’t long before followers on social media poked fun at Kelly’s outfit. He posed with his arms outstretched, apparently to avoid the spikes on his sides. He completed his look with a studded necklace and earrings and even his boots had studs.

Addressing his outfit choice on stage, Kelly joked that the suit was “hard to pee in.” Concerns have been raised by a number of social media outlets over how the 32-year-old could be seated at the Microsoft Theater, according to reports from Page Six. One tweeted: “Ok but how did he sit down? I want to see him get out of the limousine at the same time.”

Another wrote: “Who sat next to him dressed like this?” A third tweeted: “Imagine Richy getting stung and his seat invaded by those spikey things. “Well he was looking for Sandy the squirrel, Sponge Bob and Patrick when he took a wrong turn…” wrote a fourth. Another tweeted, “Women need this outfit when they’re flying and sitting next to a ‘manspreader.'” Another commented, “Well I mean there were no spikes but still…I think he was sitting on the edge of his chair.” .” A seventh tweeted, “I would use mini marshmallows…you know to stuff my new boo-boos with. This fit is EVERYTHING.”

On Sunday, November 20, Kelly was named Favorite Rock Artist at the 2022 American Music Awards. The rapper-turned-rock singer accepted the award at the Microsoft Theater in Los Angeles. The Cleveland resident took the stage in a purple outfit adorned with about dozens of nearly foot-long spikes of metal to accept the trophy from Meghan Trainor, who declared him the winner, according to MusicMayhem.

“Thanks to the fans who brought me here,” Machine Gun Kelly said as he took the stage. “I just want to say [that] I’ll ask for bigger mic stands next time. Peeing in this suit is really uncomfortable. Speaking of uncomfortable, there were some people in the rock community who called me a tourist, but they’re wrong, I’m a rocketman. We weren’t born on the moon, but we looked at it and were curious and supposedly went there. And those last two rock albums have taken me to the moon, but I’m not done exploring the universe and I’m into all genres.”