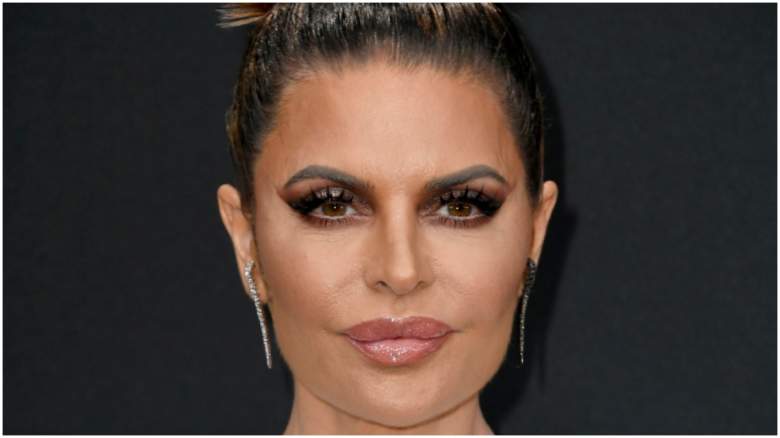 Lisa Rinna is known for her lingerie dance videos and racy outfits on her social media posts, but she took the cake with her latest Instagram photo.

The 58-year-old Real Housewives of Beverly Hills veteran showed support for a former supermodel while hitting back at haters, but her post might have been too hot for Instagram.

In an Instagram photo posted on May 1st – which can be seen HERE – Rinna posed completely nude. The RHOBH star wore her hair retro style while holding a mirror in one hand and an eyelash curler in the other. Rinna wore only thigh high stockings and heels, and her arm carefully covered her bare chest in the picture. It was also apparent that the mother-of-two wasn’t wearing any underwear as she strategically perched on the edge of the bed.

“[Paulina Porizkova] posed in a tiny bikini and they called her old and ugly,” Rinna captioned her nude snap. “I am 1 year older than Paulina. Here’s my ‘old and ugly’.”

It’s no surprise that Rinna’s post drew thousands of comments in just a few hours. Several other Real Housewives stars have posted comments to say that she’s anything but old and ugly.

“Ha! Those are about the last two words someone can use for you, honey! They’re GOALS and all [fire emoji]’ wrote RHOBH star Dorit Kemsley.

“Oh my god how is that even possible girl,” wrote newcomer Diana Jenkins.

But other commenters were not so polite.

“Why do you feel the need to expose yourself to the world screams insecurity!” one critic wrote to Rinna.

Others predicted that the photo would soon be deleted from Instagram.

Rinna’s reaction to age shame came two days after Paulina Porizkova screenshotted a comment on a recent photo of her posing in a bikini. After Porizkova shared a swimsuit pic, one commenter wrote that she must be in so much “pain” to keep posting photos like this of herself in her “old age.”

The critic added that “getting old and ugly” is hardest for “pretty” people. “I pray you come to terms with your mortality,” the commenter wrote. “We all get old and ugly … you just had to fall from a greater height than the rest of us.”

Porizkova revealed that she is often told that the age of 57 is “too old” to pose in a bikini.

“I get comments like this every time I post a photo of my body,” she wrote. “It’s the shame of old age that makes me nervous. Older men are distinguished, older women are ugly.

The model added that she believes people get more beautiful as they age because they “deserve” their beauty.

“There is no such thing as ugly and old. Just short-sighted and ignorant,” she wrote.