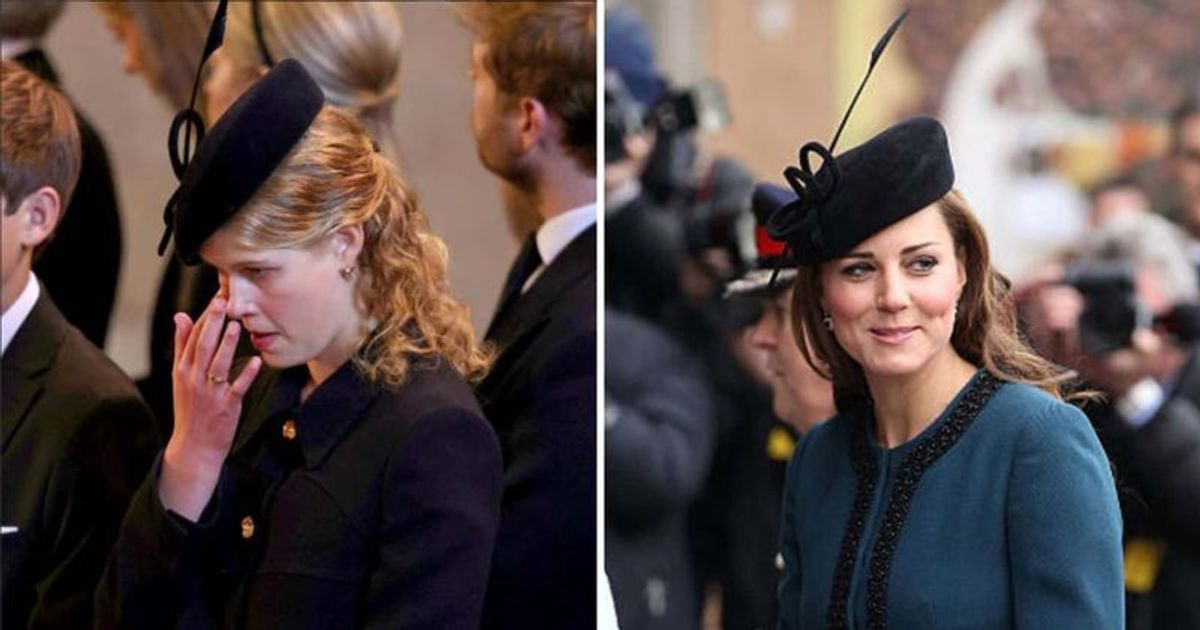 The daughter of Prince Edward and Sophie Wessex, 18, wore a chic pillbox hat with an intricate Whiteley Hats headdress yesterday as the family escorted the Queen’s coffin

LONDON, UNITED KINGDOM: Inspired by the wardrobe of the new Princess of Wales, Kate Middleton, young Lady Louise Windsor was spotted wearing a black fascinator during the Queen’s coffin procession as she made her way from Buckingham Palace to Westminster Hall. Louise, 18, wore the same black hat that Kate Middleton had worn on a number of occasions.

With members of the royal family dressed all in black to symbolize their mourning, Louise was elegantly dressed. The intricate pillbox hat on her head caught the attention of many, who realized it used to adorn Kate Middleton’s outfit during a friend’s wedding. That’s not all, the same black fascinator was also worn by Princess Royal’s son, Peter Philip’s ex-wife Autumn, when she attended a christening. So, the headwear has seen it all now – weddings, christenings and now the queen’s reclining.

The Earl of Wessex’s elder daughter, Louise, appeared to take fashion inspiration from the Princess of Wales. She wore a black coat dress with gold buttons and black heels. Hatter Whiteley Hats’ intricate fascinator completed the look, keeping her blonde locks away from her face. She had minimal accessories, gold studs and a gold ring. Louise, 18, walked alongside her brother James, Viscount Severn, 14.

The pillbox hat with the intricately detailed fascinator in question was first spotted when Kate Middleton wore it before her wedding to Prince William in 2011. Her choice of an all-black outfit caused quite a stir at the time, as she attended Harry Aubrey-Fletcher and Sarah Louise Stourton’s wedding in Aldborough in January 2011. At a winter wedding, she combined her black dress and coat with the black fascinator. The only pop of color was her pair of purple heels that matched her handbag.

According to a Daily Mail article, in 2013 to mark the 150th anniversary of the London Underground, the Princess of Wales wore the same black hat during an engagement to the Queen at Baker Street Tube station.

The next time the black headpiece was seen was in 2019 when Autumn Kelly, ex-wife of Princess Anne’s son, Peter Phillips, donned the fascinator while attending the christening of Zara Tindall’s daughter. The royal christening took place at St. Nicholas Church in Cherington, Gloucestershire in the presence of many members of the royal family including the Queen, Princess Anne, Prince Harry and Meghan. During the event, Autumn wore a bright blue tailcoat which she paired with the black hat.

Now, as she attended the emotional service for the Queen at Westminster Hall, Lady Louise looked serious as she paid her respects to her grandmother.