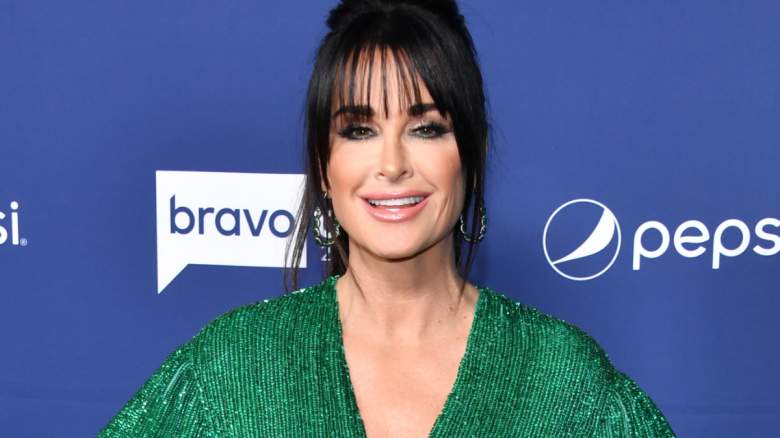 Kyle Richards is firing back at people who have accused her of using weight loss drug to lose weight.

The ‘Real Housewives of Beverly Hills’ star has really taken to exercising lately and has shared various photos of her body as she builds muscle. However, new photos of the reality star started the conversation – and some social media users are skeptical of Richard’s slimmer figure.

The chatter about Richard’s body seemed to be in full swing after her best friend Teddi Mellencamp shared a selfie with friends after a group workout. Several people commented on the photo, many saying Richards looked “tiny” but a few other comments crept in, with some people accusing the star of using weight loss drug to lose weight. However, Richards has flatly denied the claims.

Richards took to her Instagram Stories to share a photo of herself standing in a closet in a black bikini, showing off her toned abs. Again, people started commenting on her looking slim and wondering if she was getting some kind of weight loss spurt from a weight loss drug, specifically Ozempic or Wegovy, which can sometimes be prescribed to treat people with diabetes.

Ozempic is an antidiabetic drug that can be used to treat type 2 diabetes. The drug in its generic form – Semaglutide – is given in relatively small doses by injection and can help patients lose weight. In recent months, celebrities have been accused of using Ozempic for weight loss. This made headlines when patients who needed the drug to treat their diabetes couldn’t get it because people started using it more for weight loss, according to Vice.

And obviously that’s what people are accusing Richards of – using Ozempic or any other weight loss drug with the same ingredient to lose weight.

“Looks like a combination of All In and Ozempic. She looked so much better before in my opinion,” read one comment.

“She’s probably Ozempic. Suddenly all these celebs are unusually super skinny. The Kardashian, Mindy Kaling and so on. She looks good,” added another.

“Ozempic – they’ll all be skinny and look the same,” read a third comment.

On Jan. 16, 2023, Page Six shared a photo of Richards at the People’s Choice Awards as a prelude to the publication’s article about the aforementioned bikini photo. It didn’t take long for comments about Ozempic to pile up on the post — and Richards decided to respond.

“Ozempic?” someone asked in the comments section.

“Definitive!” someone else replied.

But Richards tried to set the record straight by directly responding to the comment.

“I do NOT take Ozempic. I never have,” she wrote. Several “Real Housewives” fans jumped in to support Richards and let her know that they think she looks “amazing,” despite the negativity surrounding her apparent weight loss.

Richards reiterated this during an Amazon Live on January 19, 2023.

“Well, I’ve changed my entire diet. Like I said, not Ozempic or the other one that starts with an ‘M’. After being in Europe for a month, I changed my eating habits. We were in Europe for three weeks and then in Australia for a week and I had put on weight and I was like, ‘Okay, that’s it.’ No sugar, no carbs, no alcohol,” she explained.

“I maybe just thought for a while, and then I was like, ‘You know what? I feel so good.’ Now that I’ve already lost the weight I wanted to lose — I’m not trying to lose any more — I’m obviously going to eat birthday cake or some pasta, but honestly, once in a blue moon,” she added.

Will Elon Musk ban pronouns on Twitter? The internet is digging up the CEO’s old tweet describing the ‘aesthetic nightmare’

Will Elon Musk ban pronouns on Twitter? The internet is digging up the CEO’s old tweet describing the ‘aesthetic nightmare’