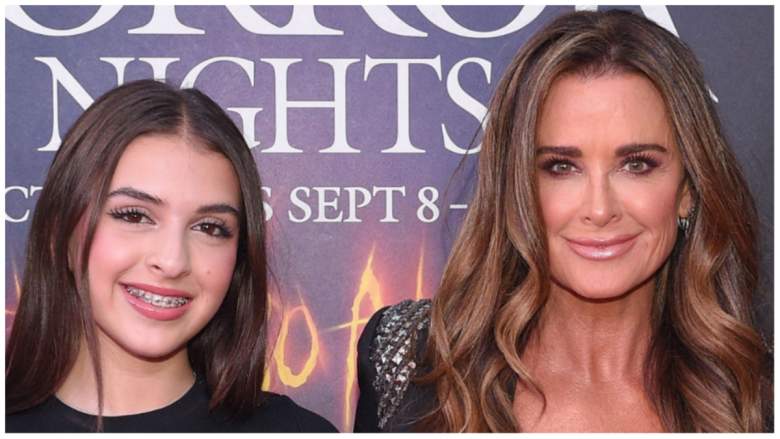 Kyle Richards was a child star, but will acting run in the next generation of her family?

The ‘The Real Housewives of Beverly Hills’ star and her sisters Kim Richards and Kathy Hilton all have acting résumés dating back to the 1970s. Kyle Richards was just five years old when she landed her first television role in a 1974 episode of Police Woman. She also appeared in the 1978 horror classic Halloween and has had recurring and starring roles in Little House on the Prairie, Carter Country, Down to Earth, and more, according to IMDb.

In 2021, Richards and Breaking Bad alumnus Betsy Brandt co-starred in Peacock’s first original vacation film, The Real Housewives of the North Pole, with The Hollywood Reporter.

Richards played Trish, a resident of North Pole, Vermont, and winner of the town’s Christmas decorating contest nine years in a row.

A year after the film’s debut, Richards got fans in the Christmas spirit by posting a scene from the TV movie on Instagram. In the clip, her character is confronted by some cheeky Girl Scouts, and the leader of the pack is played by Richards’ youngest daughter, Portia Umansky. According to IMDb, Umansky is credited with playing “Girl Scout Catherine” in the film, and it’s her first and only acting performance on the site.

In the comments section, Richards’ daughters, Farah and Alexia, responded to say how much they love the film. But other followers took a double-watch after realizing who was playing the main Girl Scout.

“Have I seen PORTIA!” asked a fan.

“Portia did so well in that scene,” wrote another.

“Portia made me laugh… the face… of her mother… she was perfect, she must have loved doing that. Definitely on the Christmas watch list,” chimed in another fan.

“I loved you in that movie! Also, Portia’s debut was the best,” wrote another to Richards.

Richards is a mother to four daughters, and two of them, Farrah and Alexia, recently landed their own Netflix show, Buying Beverly Hills, with her husband Mauricio Umansky.

Richards once remarked that of all her daughters, only Portia had expressed an interest in acting. “Portia is the only one who wants to act and it’s very weird for me to take her to auditions,” she revealed in 2018, per Page Six. “It takes me back in time, everything [of] Suddenly I am my mother and she is me.”

“I take them to auditions and I sit with all these moms and it’s also really embarrassing because [they’ll recognize me from] ‘Housewives,'” added the Bravo star.

Richards revealed her youngest daughter has a “good attitude” about auditions.

“She’s very good at it,” said the RHOBH star. “She’s screen tested [and] She gets calls back all the time, but she hasn’t booked it yet, so now I’m starting to ask, ‘Will she start [getting] sad or nervous?’ But she just walks away and doesn’t even ask for it anymore.”

After Portia booked a job, Richards was a proud mom. She shared a few Instagram photos of her and Portia in the off-set makeup trailer for The Real Housewives of the North Pole.

“Filming is almost complete,” Richards wrote at the time. “I had such a great time making this Christmas film. You all know how much I LOVE Christmas! Shooting a Christmas movie is a dream come true. I’ve been very fortunate to work with such an amazing cast and crew.” She then described Portia as “the best dude in the world.”