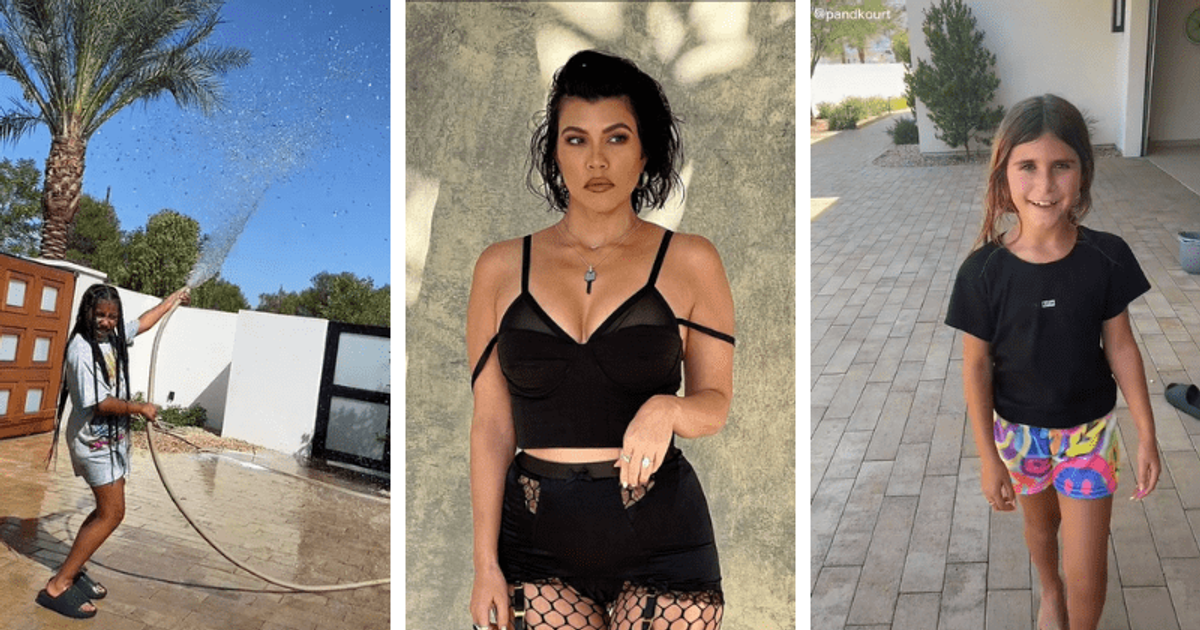 “This situation gave me a whole new perspective on kids online and how unsafe it can be,” said one fan

Kourtney Kardashian has come under the scanner for allowing her daughter Penelope, 10, to post an inappropriate TikTok video with her cousin North West. Penelope, who is quite active on TikTok, posted a music video where she puts on a black t-shirt and shorts and exits the garage at the beginning of the short clip.

North, Penelope’s 9-year-old cousin, who also attended her spa sleepover, was carrying a bucket of water when the 10-year-old started lip-syncing to Ellie Goulding’s song “Lights.” North started playing with the hose and shooting water into the air while her cousin continued to put soap on the car.

The caption for the TikTok video read “car wash.” The Kardashians fans claimed that Penelope mimicked gestures of older people as she posed “slightly seductively.”

Many expressed their outrage by condemning Penelope’s mother in the comments. “This situation has given me a whole new perspective on kids online and how unsafe it can be,” said one fan. “I wish Kourtney was overly aware of this and overly cautious,” said another concerned fan.

One fan explained: “I think it’s inappropriate because North’s dad has said several times that he doesn’t want her on TikTok. So Kourtney shouldn’t put her in there. I don’t care what they did.”

“Penelope is too young to do social media,” said one Kardashian fan, while another added, “My only takeaway is that Penelope’s account shouldn’t be public. Social media is toxic in many ways, and Kourtney knows it.”

A few days ago, Kourtney posted pictures of her celebrating her daughter’s 10th birthday at a pool party on her Instagram. Kourtney captioned the post: “A dream 10th birthday for a dream daughter. I love letting my kids take the lead when it comes to celebrating their birthdays. She shared all her ideas with me and I helped her bring them to life. Pictures and details go to @poosh.” The Hulu star also thanked Chef K for “all the delicious food” and the “special vegan and gluten-free section to me”.

Kourtney split from Scott Disick, 39, and married Travis Barker, 46, in May in a stunning ceremony in Portofino, Italy. Travis’ two daughters, Alabama, 16, and Landon, 18, now have the Hulu star as a stepmom. Mason, 12, Penelope, 10, and Reign, 7, Kourtney’s children with her ex-partner Scott, have Travis as a stepfather.